Hello again, here’s Salina … and that is my new game: jumping down the window and fly! 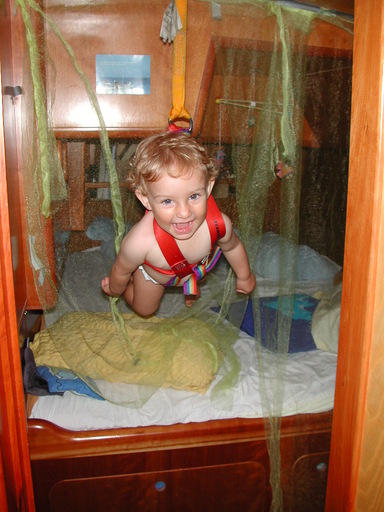 The last few weeks the schools were closed. So Papi started to help fixing high masts on land and on other ships. In the mean time we have had also some articles in the local press (la depeche-1 , la depeche-2, la depeche-3)
Now the kids are back from vacation. We sailed in light winds to Morea to do our schools visits there. Mami and I went swimming in the crystal water around Pachamama.
At night we have had a nice barbeque with the Norwegian boat “Blue Marlin” on the beach.

They showed us a unique place where we were able to swim with the stingrays.

They were surrounding us.

And their skin is so smooth.

They fly over the ocean ground and suddenly kiss you and you can only laugh 🙂
Here some information about sting rays out of our lexicon:
Stingrays are any of a number of flat-bodied rays noted for the long, sharp spines on their tails. They are sometimes placed in a single family, Dasyatidae, but often separated into two families, Dasyatidae and Urolophidae. Stingrays are disk-shaped and have flexible, tapering tails armed, in most species, with one or more saw-edged, venomous spines.
The dasyatid stingrays, also called whip-tailed rays and stingarees, inhabit all oceans and certain South American rivers. They have slim, often very long, whiplike tails. They vary in size: Dasyatis sabina, a small western North Atlantic species, is mature at a width of about 25 cm (10 inches), but the Australian D. brevicaudata reportedly attains a width of about 2 m (7 feet) and a length of 4 m. The urolophid, or round stingrays, are considerably smaller, the largest attaining a length of about 75 cm. Round stingrays have relatively short tails and well-developed tail fins. They are found in the Pacific and western Atlantic.
Stingrays inhabit warm temperate and tropical waters, sometimes in great abundance. They are bottom dwellers and often lie partially buried in the shallows. Stingrays eat worms, mollusks, and other invertebrates, sometimes badly damaging valuable shellfish beds. They lash their tails when stepped on, and large stingrays can exert enough force to drive their tail spines into a wooden boat. The spines cause serious, extremely painful wounds that, if abdominal, may result in death.
Certain other rays may also possess tail spines. Some of the devil rays and eagle rays are so armed. The latter, forming the family Myliobatidae, comprise several genera found in warm and temperate coastal waters. They have very long, slim tails and, unlike other rays, have heads that project beyond the body disk. Notable members of this family include the spotted duckbilled ray (Aetobatus narinari), a large Atlantic and Pacific species that can cause deep wounds with its tail spines, and the bat stingray (Myliobatis californicus), a Pacific form noted for its depredations on the shellfish of San Francisco Bay.
Two other families, the butterfly rays (Gymnuridae) and cow-nosed rays (Rhinopteridae), are found in shallow coastal waters of tropical and warm temperate seas and reach widths of about 2 m.
The possible existence of another stingray family, consisting of deepwater species, was indicated in 1981 with the identification of Hexatrygon bickelli. The specimen, found on the coast of South Africa, showed unique adaptations to deepwater life and was classified by its discoverers in a separate family and suborder.

One thought on “Sting rays”