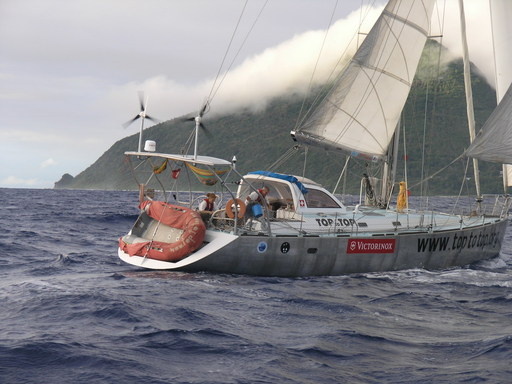 After a fast passage from Savai’i we passed Tafahi Island on starboard,
the so called “treasure island” and anchored in front of Niuatoputapu.

No phone, no internet, but 3 to 4 times a year a supply ship from
Nukalofa. This is Niuatoputapu with 1000 people, 70 living on the nearby
volcano Tafahi, which I climbed with Carlos, an Italian movie maker on
sailboat “baarca pulita”.

Everything what they need, they get from the coconut tree and the sea.
When we went to the post office to send a letter they told us that the
next supply ship will come in some months. Changing some money was not
possible, because there was no money left.
The arrival of the supply ship is a big event. They are able to sell
there mats and to buy what they can not produce themselves. The mats are
made from the Bandanas tree and a traditional gift by a Tongan wedding.
Niuatoputapu is the only island in Tonga where they kept the tradition
to weave it. The men take the bark from the trees, the women boil and
bleach it in the sea and finally weave it to very nice and soft
mats.
A few days ago a man cut his food. He was lucky that the yacht Quest of
Auckland took him with his family plus the doctor 160 Nm South to the
next hospital. Now Elisabetha, the wife of Carlos, and Sabine, as a
trained Swiss nurse, were taking care for the patients. Fortunately we
have enough and good medication on both boats; thanks for your
donations!

There are one high school and 3 primary schools (one on Tafahi).
We have done presentations and workshops in all schools and helped
with school material. The principals gave us mats, provided us with
fruits and invited us for lunch.
The message of the student