From Ile des Pins to Australia we have had 8 days. We could not go to Coffs Harbour, because there was no wind and that’s why our navigator Andri decided to go directly to Sydney. Than we have had a strong wind warning on the way to Sydney and we took shelter after 1193 nm in Newcastle. Annemarie left soon after to make it in time to the baptise of her grandchild. Annemarie was now 6 month with us. Thank you again for all your help!

Newcastle Harbour is the largest coal exporting port in the world. Currently the port exports over 80 million tonnes of coal per annum. There are more than 3100 commercial shipping movements within the port annually. The ships that visit Newcastle are large, the largest being 300 m long, 50 m wide with Gross Tonnages exceeding 100 000 t.

George Keegan from the Newcastle Cruising Yacht Club offered us a space in his wonderful marina, where we have done our clearance and organised a media conference. We have been on NBN Television in the evening news just on the same day, the Australians voted their new prime minister. Global warning was a major issue in the selections. The first action of the new prime minister was signing the Kyoto protocol! Here an article from the Harald:

Customs officer Damian Hedges told us that they have had only 6 sailing yachts from overseas in the last 6 years to clear in Newcastle. Customs, immigration and quarantine were very friendly and efficient and we can recommend it to all cruisers to go to Newcastle. It’s a lovely town with very friendly people.

The next day we prepared our bikes for the next TOP, the highest mountain in Australia, Mount Kosciusko. Brian and Jim from Civic Bikes in Newcastle helped me to tune our bikes, while Sabine, Salina and Andri went with Brain’s wife Sharon to the Koalas and Kangaroos.

After the storm we continued to Sydney together with Peter Hampton, our new member from Newcastle.

When we saw the opera house we have been so happy that we crossed the Pacific and Andri started dancing! We thanked God that we have had fair winds and no accidents!

The Royal Sydney Yacht Squadron welcomed us and was of big help in the first days in Sydney. There we met the Waron twins. They are great sailors and already about 160 years old together!

The next day Steven Brown, Mark Raward and Aolam Parkinson from NSW Maritime organised us a mooring in the Five Dock Bay. This thanks to Sir Ian Keith Wilson an ex Australian navy commander we met in Morea and Chris Oxenbould, the CEO of NSW Maritime.
Afterwards we have had a warm welcome from the Swiss Consulate. Catherine Mochamps and Ernst Hofstetter have been a big help to contact the media (see media release).

The media conference took place at the Royal Sydney Yacht Squadron organized by our friend Stuart Scocroft. A lot of sailors come along to see the beautiful TOPtoTOP expedition sailboat Pachamama. (May it is also because of one of our crew?)

Yesterday we moved from the Royal Sydney Yacht Squadron just opposite the opera house to Five Dock Bay where Treharne Moorings placed us a mooring.

We enjoyed the sailing trough the biggest natural harbour on earth very much. We passed the opera house and the harbour bridge and went upstream the Parramatta River.

For Andrea it was his last leg. He joined us for 2 months and will leave next Sunday to Switzerland. He was one of the best crew we have ever had. Thank you very much Andrea and hope to see you again! 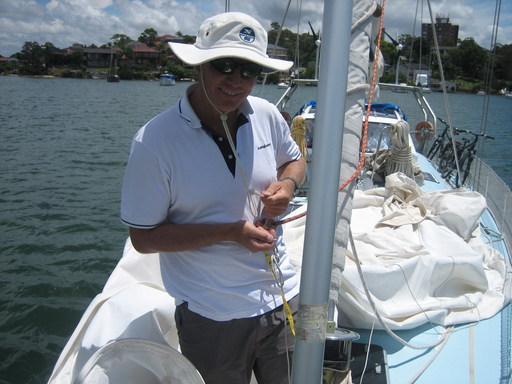 Today there was Alby from North Sails on Pachamama to take measurements for the new Victorinox sails.

The next few weeks we will have no email access, because we start biking towards Mount Kosciusko, the highest TOP in Australia. You can contact us anytime on our mobile phone (0061) 04 23 45 02 55.

One thought on “Warm welcome in Australia”