TOPtoTOP in Hawkesbury Courier!
TOPtoTOP on Channel 9 (wait till the ad is over)!

From Sydney we cycled to the Blue Mountains. Where we spent our Clean up Australia day with students from Glenbrook. All students have been champions in collecting trash and all became winners in the TOPtoTOP trash collecting contest! We are looking now for a “Swiss chocolate donor” as a price for this wonderful young proud people. 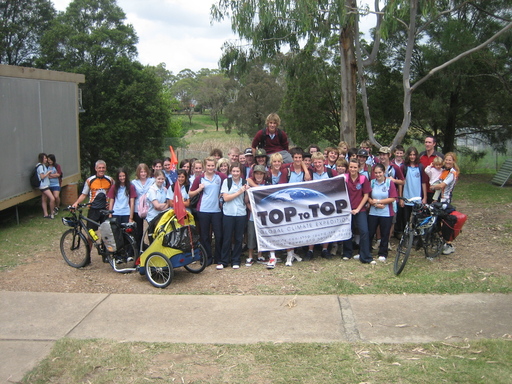 Thanks to Steven Bod and Cath Walker’s familiy we visited Hawkesbury High School, see also the article in the Hawkesbury Gazette. Salina was the first time our technical assistant on the computer.

Thanks to Jenny and Michael we were able to stay the whole week at their place in Glenbrook where we have been at St Finbars primary School: 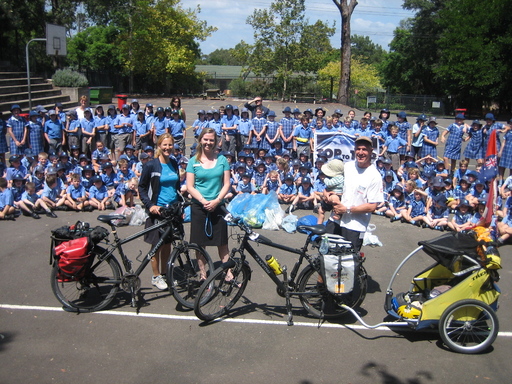 Ron Brewster a film maker and friend of Jenny and Michael just made an intervew with us. It will be on TVS in every capital city in Australia!

Next was “Our Lady of the Nativity School” in Lawson:

Next was Warrimoo Public School:

Tracey and Peter had a very special surprise for us in the person of their friend Steve Boys. With his program “snakes are our mates” he travels from school to school to educate students about the reptiles in Australia. Salina and Andri know now more about snakes, lizards, frogs, turtles and even crocodiles.

After all this busy work we take some time off on the weekend to enjoy this climbers paradise in the Blue Mountains:

Dario is quite proud of
Salina’s skills!