THE MOMENT HAS COME!

Finally!!! After MONTHS of preparation, panic, and pandemonium, PACHAMAMA is ready to race in the 2008 ROLEX SYDNEY HOBART YACHT RACE!

We can barely believe it, as SO much has happened in the past few weeks and days!! After staying at Bobbin Head for a few days, we then made our way back to sydney via the beautiful refuge bay!

Lot’s of other events have been going on, including an exciting visit from a number of enviromental consultants, which was organised by our sponsor SGS. They had a great time on the Harbour, and learnt everything about the TOPtoTOP Global Climate Change Expedition’s efforts to battle global warming! It’s also been a big time for media! With the Press buzzing around the CYC, we have been busy scheduling TV interviews, Radio interviews, Magazine Interviews…. the list is endless! Channel 7 had fun with us this morning, sailing side-by-side PACHAMAMA getting some shots with the Opera-House and Harbour Bridge in the background! 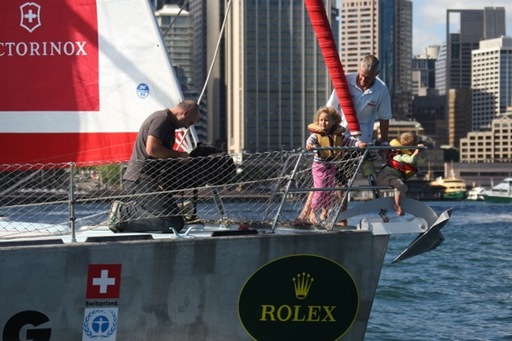 But we can’t express enough how much the vibe of the race is pumping at the CYCA! Live bands have been playing at the permanently packed marina pub, while skippers, crew, media and families are all flying around in prep for the race!
But enough about that, it’s finally time to announce and introduce… THE 2008 CREW FOR THE ROLEX SYDNEY HOBART YACHT RACE!!!! (Drum roll please…)
Jacqui Hocking
Jacqui has been a volunteer with the expedition for a while now, and has been living on the boat with Dario and Sabine, completing a Documentary with total coverage of their journey! Joining Syd-Hobart will be a fantastic oppertunity to film the family in action, and she can’t wait to get her camera in it’s “scuba-gear” and get washed-out footage in the waves! (Just don’t get salt on the lens!!!)
Simon Hoerauf
Simon met Dario and Sabine through Peter Braig, the photographer (not only for the Financial Times, but also;) for the expedition! Simon currently works with the innovative company “Play communications” and in his spare time enjoys sailing on his own yacht “Lisa” (Also commonly known as “Lisa the Boat” 🙂 Like all the crew, it will be Simons first Sydney-Hobart, but you never know, it certainly might not be his last!! 🙂
Bill Dobson
Bill ran (or “sailed!”) into the expedition while he was cruising around Tahiti! There, he sailed with the family, and a close bond was formed. Now, 2 years later, they re-unite, as Bill comes up from Melbourne to join the race. An experienced sailor, he is looking forward to what the Bass Straight has to offer!
Daniel Leuheit!
Dan has just arrived from Germany, and I don’t think he could have ever imagined his holiday turning into something quite as exciting as this!!! He has been racing yachts for several years, although this will be his biggest journey yet! He is loving the pre-race celebrations, and just can’t wait to get on the water!
And ofcourse, Dario and Sabine!!!
Another exciting update however, is that a last-minute crew member has come onboard!!! Matteo Micelli has been sailing for years, and has done several regattas with both small and maxi yachts. His biggest achievement so far, has been setting a world record crossing the Atlantic with a little 20-foot catamaran he built himself. His next venture is to attempt to circumnavigate the world, solo and unassisted, on his class40 yacht he built himself in his Italian shipyard! And now he will be joining the TOPtoTOP Global Climate Expedition in this years Rolex Sydney Hobart Yacht Race! Everyone is happy to do the race with the great sailer, and Matteo is having a wonderful time onboard preparing for the big day tomorrow!
Sadly the kids won’t be attending the race, due to strict regulations! But they’ll be in Hobart to celebrate their parents arrival on New Year. (The teams ETA).
So, another year has nearly passed, but against all odds, the TOPtoTOP Global Climate Change Expedition is STILL underway! It definitely hasn’t been easy, but with the help of all the families, friends, sponsors, and volunteers, we continue to spread our message, inspire, and educate the world about Global warming! We are continually stunned by the enthusiasm and hospitality that people have shown towards the expedition, and the race has been a perfect example of the kindness and generosity that the human spirit is capable of! As we continue to find positive example of renewable technology and environmental achievements, we have also been finding positive examples of communities, families and businesses’ that are always more than willing to contribute, in what-ever way they can, towards the expedition and our cause.
Thank-you for helping us get to where we are! We could not have done it without you! And most importantly, we would like to wish everyone the BIGGEST, MERRIEST, CHRISTMAS and the HAPPIEST NEW YEAR!!!

That’s all from us for now, make sure you watch the race on Boxing Day, (26th of December) on Channel 7s LIVE-streamed broadcast online!
(((http://rolexsydneyhobart.com/news.asp?key=3631)))
There’s also sure to be a cover story and a few interviews on various news channels within Australia, so keep tuned in, and we’ll keep you updated online on our website!
Wish us luck for the race! SEE YOU IN HOBART!!
-TOPtoTOP race-team 08! 🙂