We are just South of Cyclone Hamish with hips of rain!
COMMUNITIES in north and central Queensland are bracing for Category 5 Cyclone Hamish which could be more destructive than Cyclone Larry.
UP to 1000 campers are being evacuated from Fraser Island as category five cyclone Hamish heads south towards the central Queensland coast.
Lady Elliot Island and Heron Island, both west of Gladstone, were also evacuated on Sunday morning as a precaution to the cyclone, which had recorded winds of up to 280km/h on Saturday night.
Hamish, upgraded to a potentially deadly Category 4 storm yesterday, had winds gusting up to 230km/h last night but early today was upgraded to a more lethal Category 5 storm, The Sunday Mail reports.
The bureau’s warning said Hamish “poses a very significant threat to coastal and island communities between Bowen and Bundaberg”.
“The cyclone is expected to maintain a southeast track parallel to the coast during the next 24 to 48 hours.”
Yesterday, Emergency Management Queensland coordinator-general Frank Pagano said the menacing storm, lurking off Townsville last night, could hit even harder than Larry, which devastated Innisfail in March 2006.
“This cyclone will generate winds at the centre of between 225km/h and 280km/h,” he said.
Whitsundays Disaster Management Group coordinator Senior Sergeant Steve O’Connell says emergency services have prepared as well as they can in the event the cyclone does come towards the islands.
He says the next 12 hours are critical.
Whitsunday Regional Council Mayor Mike Brunker says there are strong winds in the area but no reported damage yet.
Hamish is estimated to be 155km northeast of Hayman Island and 305km east of Townsville, moving southeast at 18km/h.
Premier Anna Bligh yesterday invoked powers allowing emergency personnel to order residents to evacuate towns under threat.
She warned that several major centres — Innisfail, Townsville, Mackay, Rockhampton, Gladstone, Bundaberg and Maryborough — were in the firing line.
“It is imperative we ensure everyone is out of the path of this extremely serious cyclone,” she said.
In the Whitsundays, tourists and non-essential staff were evacuated from the smaller island resorts to the mainland and shelters on larger islands were being prepared.
Hamish will be the most severe storm to hit the region since Cyclone Ada, which devastated island resorts and left 14 people dead in January 1970.
Hamilton Island chief executive Glen Bourke said yesterday the 3000 tourists and workers were being upgraded to warning level yellow: cyclone imminent.
“We want people prepared before nightfall. We will move guests and staff to the Reef View Hotel, which has the best cyclone rating on the island,” he said. 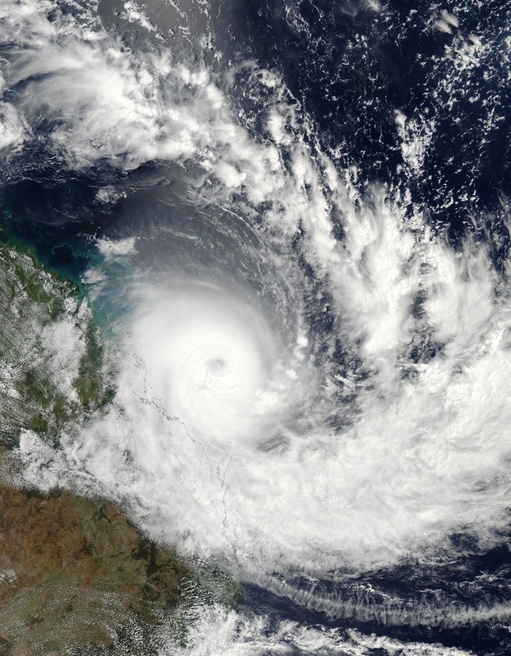