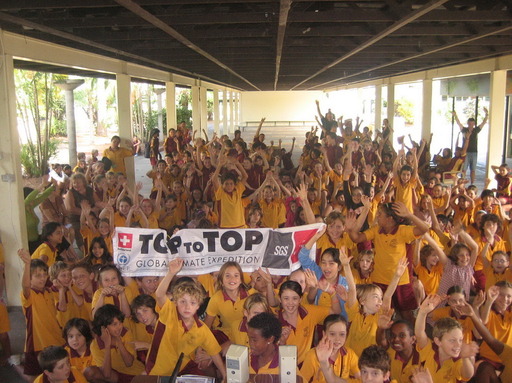 Edgehill College, thanks to the Cairns City Port Marlin Marina we are able to visit hips of students
The past week has been an exciting and busy experience for everyone onboard PACHAMAMA, who has been sailing up from Magnetic Island to Cairns!
The first stop on the way was the beautiful Orpheus Island, which was abundant and lush with all forms of life! The dense mangroves which surround the island provide all the crawly little inhabitants with a great deal of nutrition, and in low tide, as we walked to shore, you could see plenty of wriggling creatures on the shallow sea floor. We were even lucky enough to see a reef shark close up in the shallow water!
On the Island we visited the Orpheus Island Research Station, and met Dr Glen Burns, a lecturer with a student group from the USA. He was teaching a marine ecology course, and was more than happy to allow the TOPtoTOP to interview him about the station. The aim of the research centre, along with any field station, is to collect data in the wild to support or reject an idea or hypothesis. During the course the students would study the Great Barrier Reef and all the rich wildlife that lives in it. Dr Burns was extremely positive for the future, saying that the since the mid 70s when the Marine Park Authority was established, reef protection and conservation had improved substantially. Areas that were once heavily overfished were now being preserved, and many areas had finally managed to maintain a sustainable equilibrium.
However, Dr Glen burns still believes that Global Warming holds an immense threat to the Great Barrier Reef. “There is a chance that we could loose the Great Barrier Reef in the space of three decades!…If the planet lost this, the planet would be a lesser place”
Why? Well, The Great Barrier Reef is the largest reef system on the planet, stretching along 2000 kilometres of Australia’s eastern coast line. Amazingly, within this 2000ks, there is about 2900 different reef belts! The diversity and pure density of Australia’s Great Barrier Reef is astounding, not to mention the alluring, rich colours of the coral and fish! Everyone working to protect the earth from Climate Change can look to this beautiful World Heritage site for motivation.
TOPtoTOP met one student, Scott, from Australia, who was helping Rebecca Fox with her research on Herbivorous Fish, using acoustic tracking. This kind of research is also very important to the survival of the ecosystem, as herbivorous fish help to maintain low algal biomass on the reef, keeping it healthy.
Dr Burns told TOPtoTOP that any research into the environment is important. “If you love and understand something, you’re more likely to protect it.” 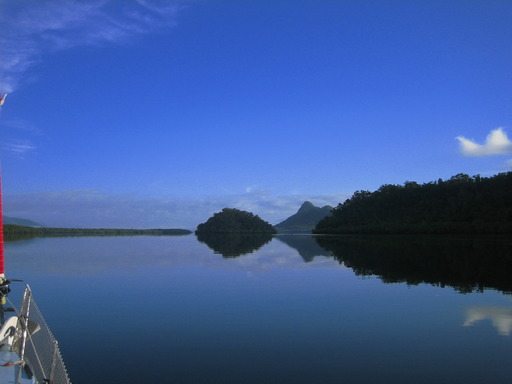 After spending a night moored at Orpheus, we continued on through the Hitchenbrook channel to Dunk island. Dunk is famous for it’s luxurious sandy beaches and electric blue tropical butterflies. (Although they must have been hiding while we were there!) We went for a wonderful hike around the island, under the cool canopy of the Rainforest. Salina managed to walk the whole way! About 15 kilometres! Which is very impressive for a young girl of four! That night, the wind has died down, and so we ended up staying at Dunk for 2 nights. We said good bye to Ric and his family, who caught a light plane from the island to Cairns, so they wouldn’t miss their flight back to their home in Sydney.
PACHAMAMA continued north the next morning, and that afternoon arrived at Fitzroy Island. The coast was made up of dry segmented coral, not sand, which was interesting, although we had to be careful bringing in the dingy to avoid a puncture! It was getting dark, but there was just enough time for everyone to go for a quick walk up to “The Secret Garden”. It was a nice track through some rainforest, following a silent river. (Where water runs underground beneath the rocks). You could hear a lot of birds become active as the sun went down, but they were very hard to make out in the darkness. 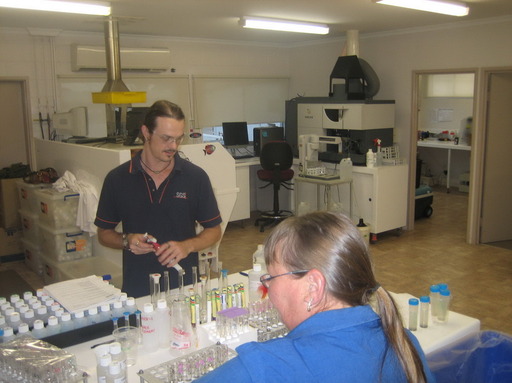 The next morning we headed for Cairns! When we arrived, we moored in to the Cairns City Port Marlin Marina. There was so much to do when we arrived! Organise the Media, School Visits, Doctors appointments… We were very pleased to meet Jon Dicker from SGS environmental services, and his colleagues Shay and Kylie. They were fantastic helping with shopping, printing posters, coordinating events, and just generally looking after us here in Cairns! Thanks to them, and the Marlin Marina for allowing PACHAMAMA and the TOPtoTOP expedition to do the project here.
We were very busy coordinating the Media, with articles from the Cairns Post and Bulletin. Coincidentally, Cairns had a big Sports Festival a few days after we arrived! With Triathlons, Running races, and family bike rides! Thanks to Malcolm Robertson and the Cairns Regional Council, TOPtoTOP was able to be involved, and met many of the locals, sharing their message, and the whole family even took part in the 2.5 run! After Dario had finished, he ran back to join Sabine and the kids as they crossed the finish line, with everyone cheering from the sidelines!! 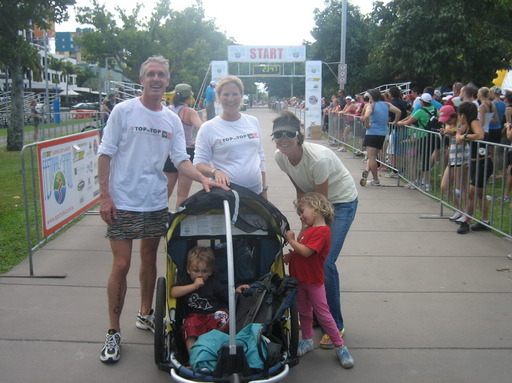 At the festival, Dario had a great interview with SEA FM, a local radio station, and talked about the expedition, and why sport is so important for a healthy lifestyle and environment. All in all, the day was a wonderful success!
On Monday, the TOPtoTOP team, along with their friends from the Sailing Yacht “Magnum”, went to experience some of what Cairns has to offer! They had been told to visit and climb “The Pyramid”, which is a local mountain about 20 minutes from the City. While a very pregnant Sabine and the kids walked most of the way, then stopped for lunch and to enjoy the view, Dario continued on to the top with volunteer Jacqui and good friend Ann to see a different perspective of the City! From there, the fields of sugar cane were lush green, and you could even see the ocean and bay out in the distance. 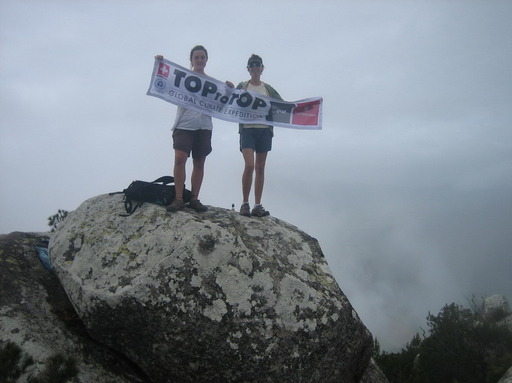 The TOPtoTOP team met Suzanne Long and Melissa Jess from the Reef and Rainforest Research Centre. They were also happy to do an interview with TOPtoTOP, and explained what they did at the centre, and why the conservation of the Reef and Rainforest was pivotal to combat Global Climate Change. Suzanne and Jess showed TOPtoTOP that the research centre is a great example of people working together to find solutions to Global Warming. They not only work on the Great Barrier Reef and the tropical Rainforest of Australia, but they also extensively cover research throughout the Torres Straight. Rising sea levels have a devastating effect on not only the mainland of Australia, but also the many islands that surround it. The Torres Straight has a large indigenous population, which relies on the natural resources of their islands. If Global Warming continues to worsen, it may make it impossible for the germination of their crops. With rising sea levels, eventually many of the islands may become uninhabitable for human conditions.
Suzanne and Mellisa invited TOPtoTOP to come to a seminar that afternoon, which was an information session on rising sea levels to be given by John Hunter, an oceanographer from the ACE, – Antarctic Climate and Ecosystems – Cooperative Research Centre.
It was an interesting forum, and a chance to meet with many people from industries promoting sustainable and renewable technology and agriculture. John specified on Cairns, and the east coast of Australia, with the precautions investors will need to make with sea levels rising in the future. Although there are many uncertainties regarding the facts with rising levels, John and the ACE had developed a method for businesses to calculate the risks involved with buying/owning assets close to the coast of Australia. Regardless of the unpredictability surrounding rising sea level statistics, the community must be aware that sea levels will rise significantly, and that means that flooding may occur more often. More information. 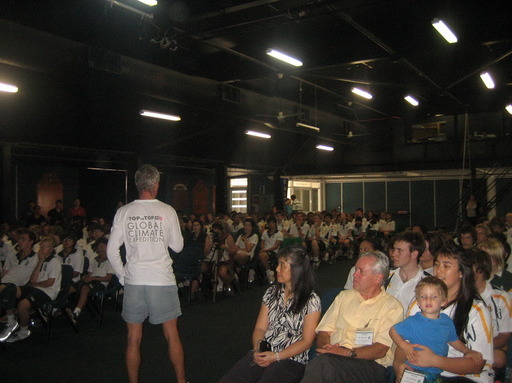 Along with the Media involvement and Research that TOPtoTOP has been doing the past week, we’ve also been busy getting ready to do some exciting school presentations. Thankfully, we met a lovely couple Peter and his wife Terumi, whose daughter Tiffany arranged for us to visit her school; Trinity Anglican College. There we did a presentation to over 400 high school students! The kids thoroughly enjoyed the talk and were excited to hear about the opportunity to write an essay and take part in the TOPtoTOP Global Climate Solution Award!!
Peter is Swiss and is the owner of the watch and opal gallerie “Princess“. He donated Dario a jewellery so he has a birthday gift for his godchild Flurina (Erstkommunion).
Jon from SGS also organised a presentation at his sons school, Edgehill College which was also a great success and a SGS public presentation at the Cairns Yacht Club.
After reading an article about the family in the newspaper, a Cairns local, Robert, offered to take the family to the Cairns Wildlife Safari Reserve. It was a lovely day out, and the kids had a great time watching the lions at feeding time! 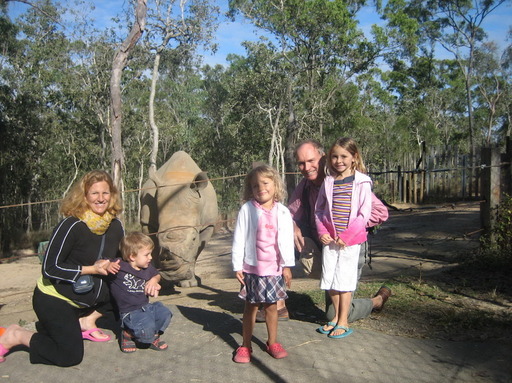 Roberts wife Leanne is a midwife, and was a great help to prepare Dario and Sabine for their next crew member! 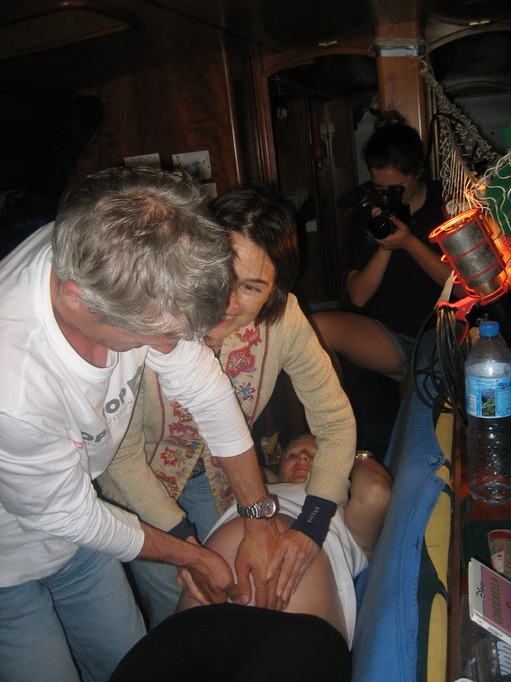