Our new contact number in Singapore is: +65 94 60 60 74
A historical moment: After 7 years on the expedition Rosi and Ernst, Sabine’s parents, visited us for the first time and couldn’t wait to see Noe. Together we were celebrating first Dario’s – and then Andri’s birthday. Just before we had to say goodbye to all our new friends in Bali. Jacqui and Annemarie joined us again for the next leg to Borneo and Singapore. From Singapore we continue to India and towards Everest, – our next TOP and big clean up project. 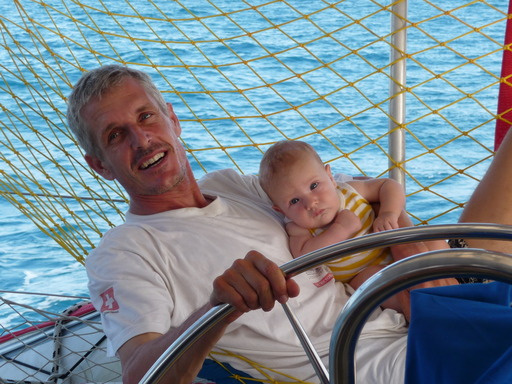 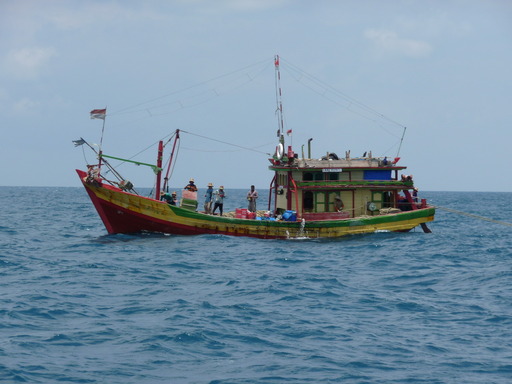 The biggest challenge was to avoid the Indonesian fishing vessels. Some didn’t have had navigation lights! Thanks to the Katadyn Combi Pump we had always healthy water for our kids and Jacqui was a great teacher. 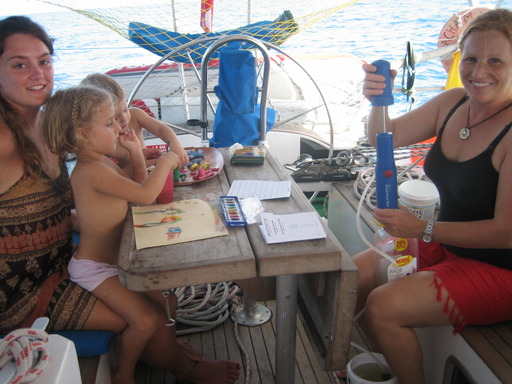 On the 5th of November Pachamama crossed the equator the second time after being in the Southern hemisphere for more than 5 years. Jacqui was baptized by Neptune and Neptuna to “Sea Horse”, Annemarie to “Manta”, Andri to “Nemo”, Salina to “Mare maid” and Noe to Orca.
We arrived safely in the Nungsa Point Marina on Batam Island. Tomorrow we clear out of Indonesia and make our way to the Raffles Marina in Singapore. Download our activity and event agenda in Singapore here.
–
A brief on Tanjung Puting National Park, Kumai River, Borneo: 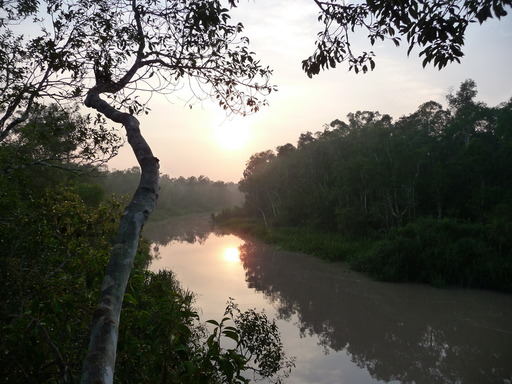 Tanjung Puting National Park is absolutely one of the biggest highlights of Indonesia. The park is one of the largest protected areas in the whole of South- East Asia. Situated on the Southern coast of remote central Kalimantan, – the Indonesian section of Borneo. It compromises of 750 000 acres of tropical forest and swamp forest, the park is home to more than 600 species of trees, over 200 species of orchid, at least 220 species of bird, 28 spices of large mammals, – the rare clouded leopard and crocodiles for example and 9 primates including the endangered and beautiful orangutan, proboscis monkey and gibbon. It also contains hundreds, if not thousands, of different plant species used in modern medicine! But on top of all its uses, it is one of the most scenic tropical rainforest on earth! 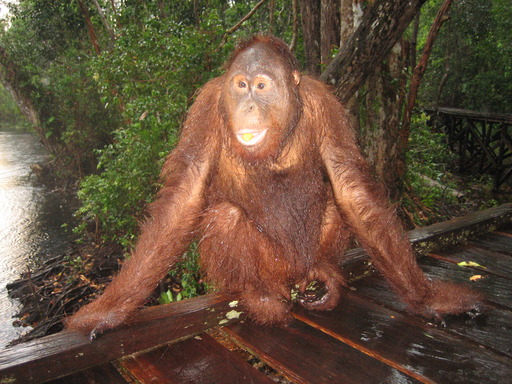 The orangutans in Borneo and Sumatra are the only great apes outside Africa. Dr. Birute Mary Galdikas, a Canadian researcher has studied and worked closely with the orangutans of Indonesia Borneo most of her life in their natural habitat, and today she is the world’s authority specializing in orangutans. In 1971 Galdikas met Dr. Leaky, Kenyan anthropologists who helped her to find funding for her studies through what was called “The Leaky Foundation”. As he had previously done with both Jane Goodall and Dian Fossey for their studies on chimpanzees and mountain gorillas.
In the early days of her research she spent weeks tracking wild orangutans, and was the first to discover many unique traits of the animal. For instance, she was the first to document that the birth interval for the ape is about 1 in every 8 years, making them extremely vulnerable to extinction. Today we also know that orangutans are very affectionate! They share kisses and take wonderful and loving care of their offspring. They are also very intelligent creatures, with the skill to make their own tools for gathering food or building shelter!
Along with her research, Dr. Galdikas had originally set up Camp Leaky to reintroduce orphaned and rescued orangutans into the wild. Under the supervision of researchers and rangers, juvenile orangutans are taught to live naturally in the forest by gradually introducing them to wild surroundings. Today, there are a number of research stations and feeding grounds where bananas and condensed milk are given as a supplement to their diet. 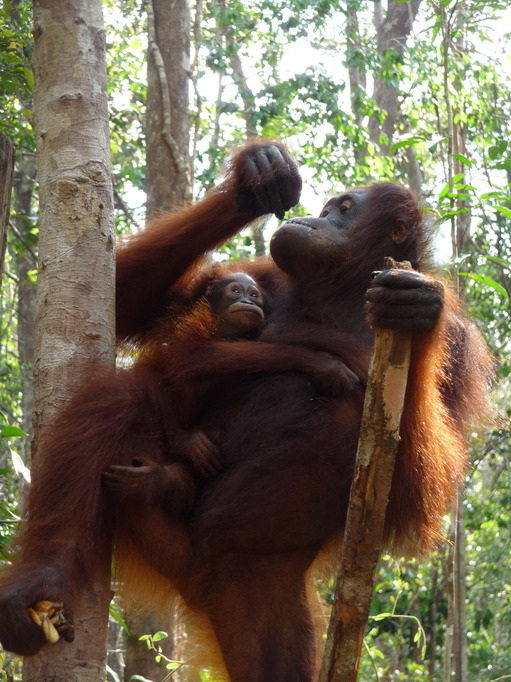 The situation for the orangutan is far more complicated now than when Dr. Galdikas started work 38 years ago. As a result of poaching and habitat destruction, caused by farming, and palm oil plantations, orangutan populations are on the edge of extinction. In fact, it is thought that the entire species could be completely wiped out within 5 to 10 years. Although the population in Tanjung National Park continues to grow, there is barely any possibility for the National Park area to increase, and therefore there will not be enough territory and food to sustain the increasing population. 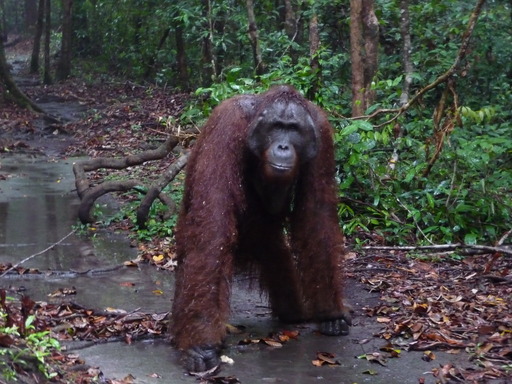 Things have been looking better for the forest of Kalimantan since the new president was elected 5 years ago, at least in theory! But in Kalimantan’s vast interior, illegal logging continues to exist. With poor local people trying to make quick cash, corruption is common, even at the edge of the national park. Fortunately however, some progress is being made in tourism, as we were told by Harry who manages and organizes klotok tours into the forest on Sekonyer River with his brother, Jenies Subaru. ( http://www.orangutan-tours.com +62 (0) 8125086105). These growing tourism dollars enable more and more local people to feed their families, without resorting to the destruction of such fragile and indispensable rainforest. 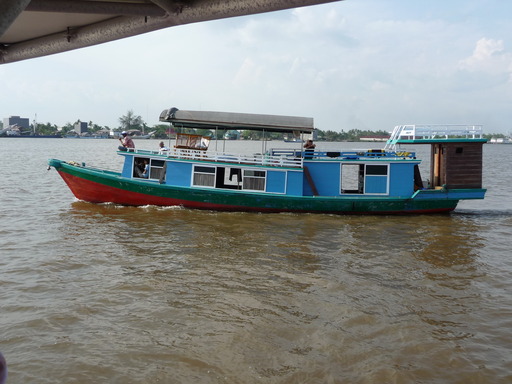 In the early morning of the 30th of October 09, Jenies Subaru, our tour guide, fetched us all from Pachamama with his “klotok tiana”; a long boat built out of local iron wood. It served as our transportation, restaurant and accommodation for the next 3 days!! 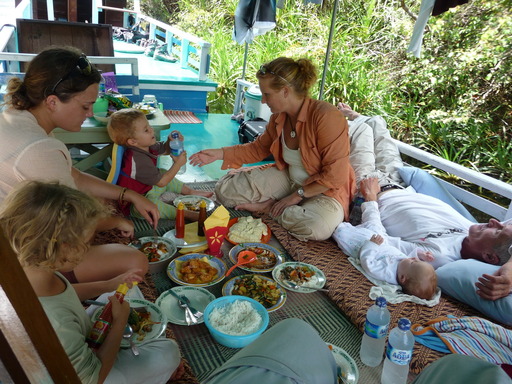 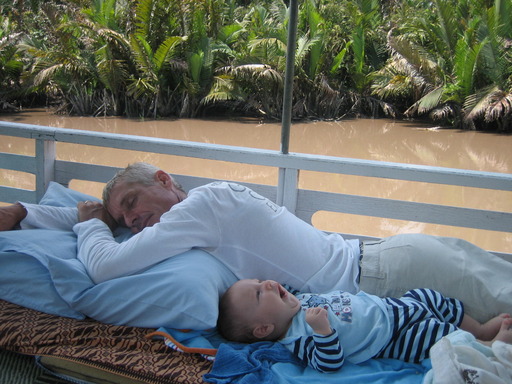 During our time on this 3 day adventure, we also had the opportunity to visit a school in a local village; Tanjung Harapan. There are around 450 people living in this small village, and 48 kids attending the local school. 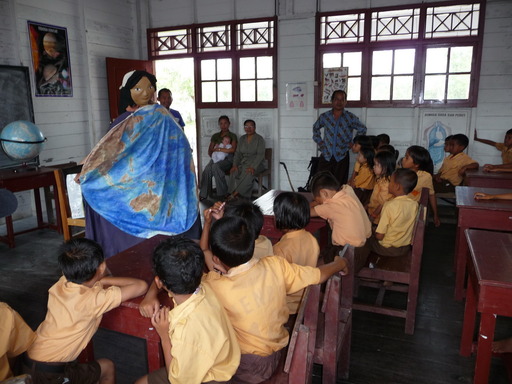 It was the perfect location for volunteer Annemarie to “premiere” her unbelievable puppet show, educating the children about Climate Change, and promoting the health and protection of our environment. The show consists of 8 handmade leather puppets and 1 full-scale character costume as “Pachamama”! 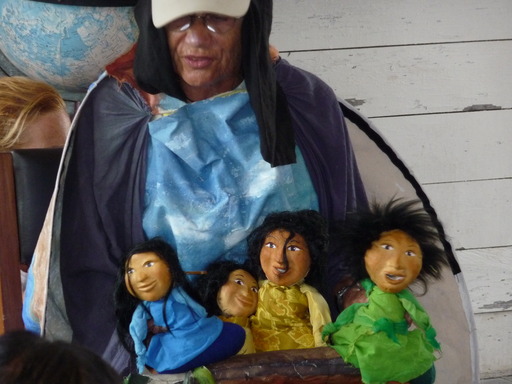 Translated to the Indonesian students by our tour guide, they were all delighted by the performance! Dario gave a presentation and helped run a small scale clean up of the village. The children, ranging from 5 to 12 years old, were inspired to take part in the drawing contest, and Sabine was extremely impressed with some of the artistic entries to find some solutions for our planet! 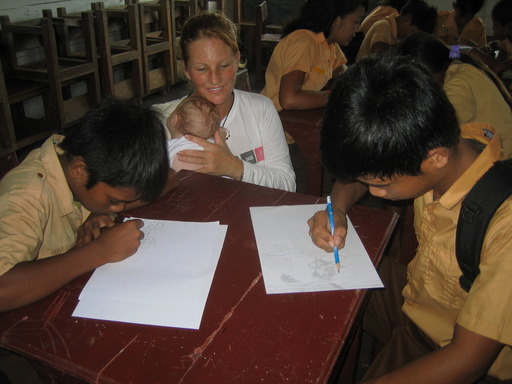 In all, the school visit was a worthwhile success! 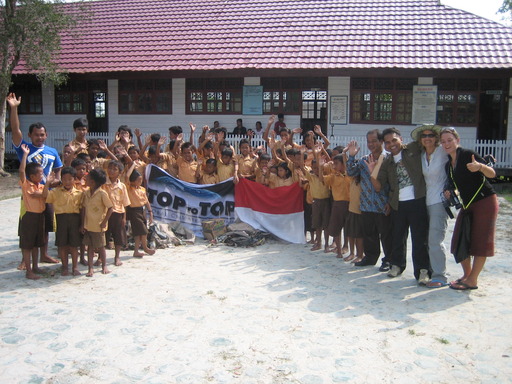 But along with visiting this local town, what was also important was the time spent at Camp Leaky. To get there, we left Kumai River and entered the smaller Sungai Sekonyer, a brown muddy river flowing through the surrounding dense forest. We soon discovered that this is not the natural color of the river, and that further upstream Mercury used in the gold mining is dumped directly into the river! Nonetheless beautiful however, fire flies glow by night along the bank of the river on the leaves of the Nepah palms. Sometimes you can get a glimpse of a proboscis monkey jumping or swimming over the river, or even a wild orangutan! 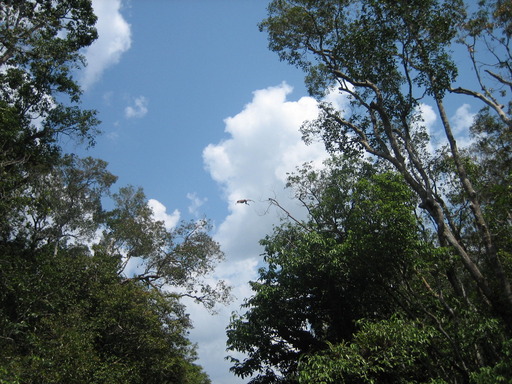 We were lucky enough to see many stunning fluorescent kingfishers swooping through the canopy of the palms. We were glad to also see some police stations along the water, to warn people off illegal logging. 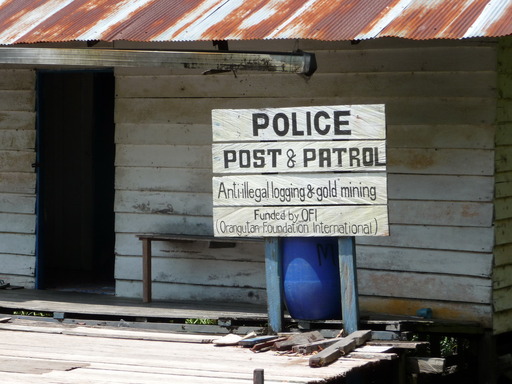 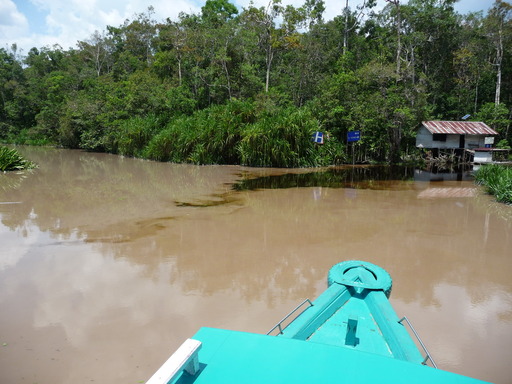 After a trip up the crystal cool river, we reached camp leaky and the feeding station. Jenies was a super guide, particularly because he has worked already with his father and grandfather for years in the park. He knows all the stories and names of each and every orangutan. To see the animals up close in the wild felt like such a privilege, and it will surely be something that we will not forget for many years to come. 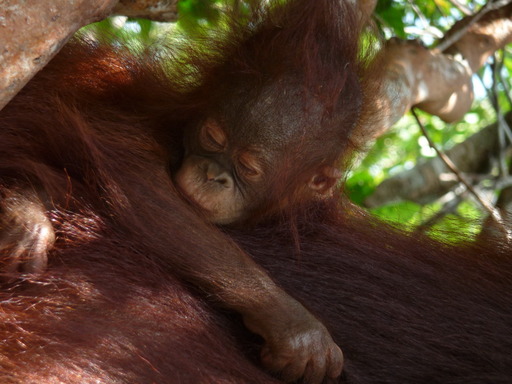 Even newborn baby Noe shared the experience, as Sabine saw the similarities in affection with a mother and her young; the famous “Princess” orangutan. 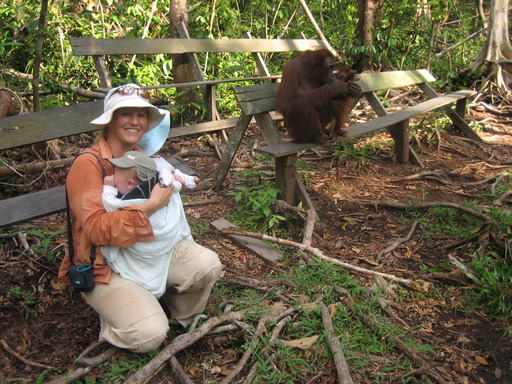 On the second day we visited a reforestation camp. The camp consists of 49 hectares, where saplings of different rainforest trees are being re-introduced in an effort to rehabilitate the areas affected by logging, and the 1997-1998/2008 forest fires. Here, we were witnesses to the impact logging has had on the environment: the loss of the humus layer due to heavy rainfall left nothing but an arid landscape. The rangers pointed out the last remnants of the previous forest; stumps, cut down and burnt.
It was like walking on desert, where it should have been lush rainforest. The reforestation is a long and difficult process that involves watering every day and tender loving care for the saplings, with some species only growing one millimeter a year! It is heartwarming and very impressive to see the work of such researchers and rangers, and we all must appreciate their utmost dedication to the conservation of the national park. We thank you! You are a positive example for us all! 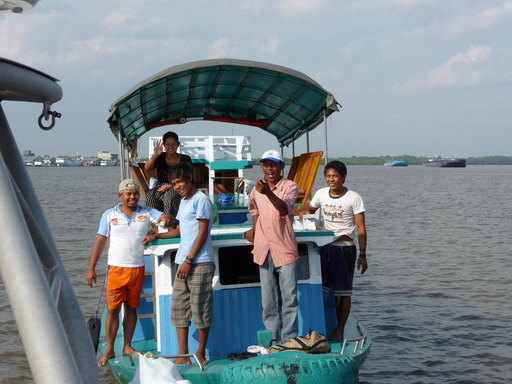