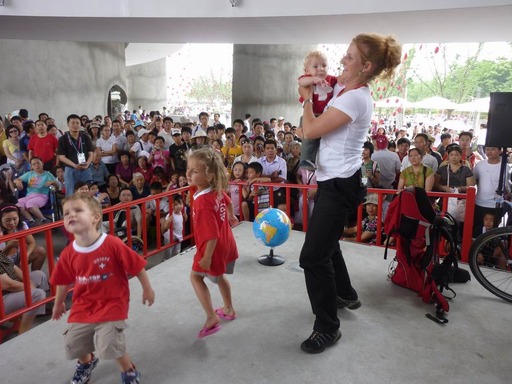 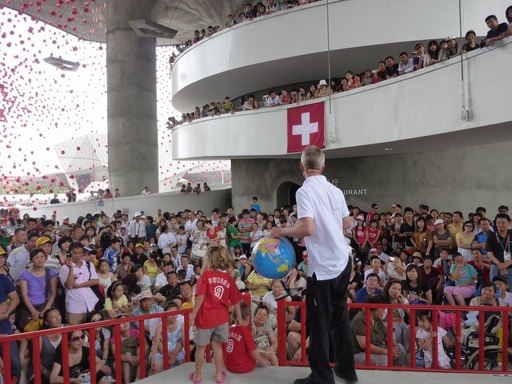 The TOPtoTOP family was THE attraction for 2 weeks at the Swiss Pavilion. They taught the Chinese audience how to dance and sing in Swiss while spreading their message to protect our climate with a lot of fun and adventure: 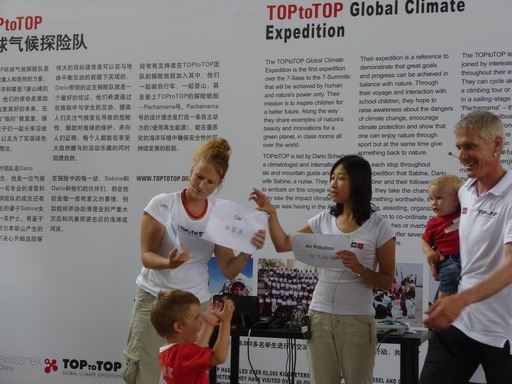 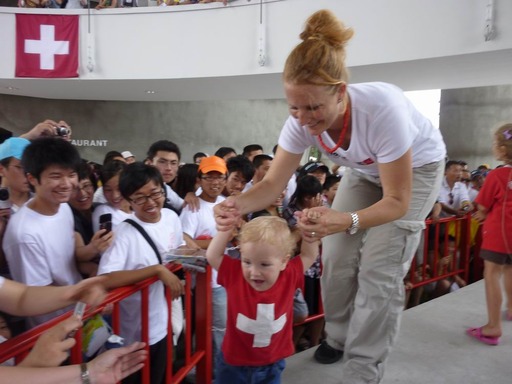 Even Noé was integrated in the show 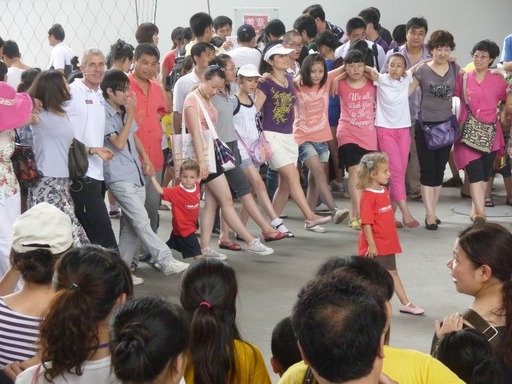 Andri and Salina taught the Chinese how to dance
We also met invited professors and students from Fudan, Tongji and Jiaotong University to talk about our inspirational experience at the Swiss Pavilion: 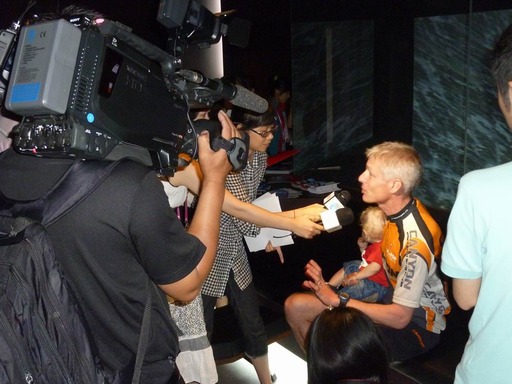 During our stay in Shanghai we were surrounded by the media and invited to several life shows. 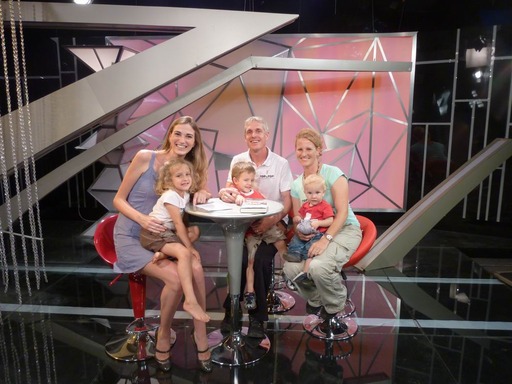 Check the media coverage at the end of the report! 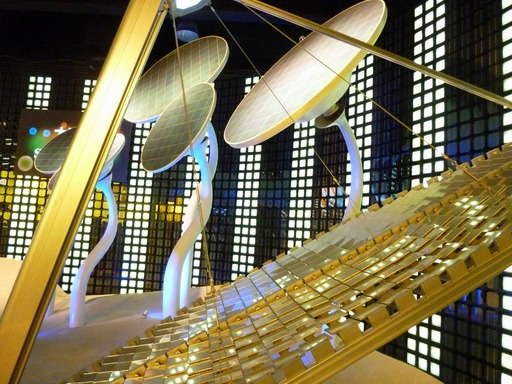 The Chinese Pavilion shows many good solutions to protect our climate, too. 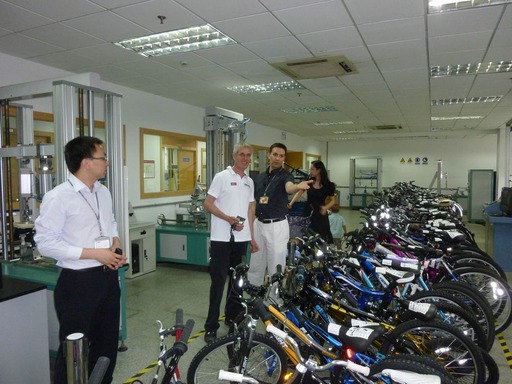 We also had the opportunity to meet some of the SGS staff in Shanghai and visit their great testing laboratories. Here they are testing bicycles. Our CANYON bike was for sure also tested by SGS, because we never had any problems.
Thanks a lot again to the whole PRS team in the Swiss Pavilion, specially Anne-Sophie Cosanday, Kieu Tran and Peter Tscherter. Many thanks also to swissnex China, specially Flavia Schlegel and Karen Undritz and the Swiss General Conulate in Shanghai, specially Consul René Seiler, deputy Consul Thomas Schneider and Heidi Zhang. Thanks a lot to our two main sponsors Victorinox and SGS, and specially to Richard Shentu and Angela Chang from the SGS office in Shanghai. 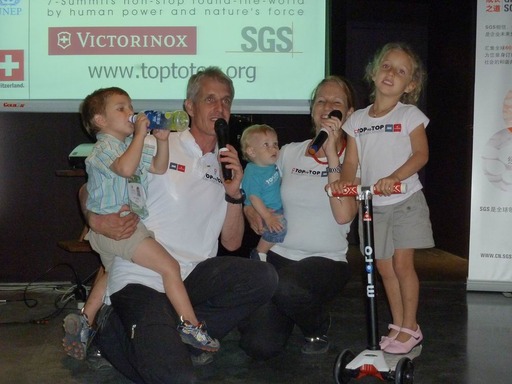 The World Expo Shanghai was a great success. I think it was because we are family trying to live in harmony with our climate… We all played our part: Sabine, Salina and Andri did the “environmental games”, the dancing and singing; Dario did the more scientific presentations….but the star of the show was little Noé.

GOOD NEWS:
We just got an email from our TOPtoTOP member and Rotarian Hanna. Check out her flyer and get in contact with her so that we get even more pencils for poor school children in Nepal:
“Just a quick update on Operation Colour Pencils: Alex, our benefactor, phoned me on Tuesday to tell me that the pencils have arrived. His words to me were: ‘I only managed to get 440 sets of coloured pencils out of them [the wholesaler], but they did throw in 400 pencil sharpeners.’ ! Isn’t that fantastic? He is going to bring them down to Yankalilla this week. I picked up 15 sets from Yankalilla Area School on Monday, one of our Rotarians (Ann Sinclair) dropped off 2 gross (2 boxes of 144) of pencil sharpeners, and people have been dropping off pencils into the collection box at our back door. A lady from Goolwa also phoned me last week and she has now dropped off 10 sets of pencils at my mother’s house (in Goolwa). All up we now have about 500 sets of pencils and nearly 700 sharpeners. I will follow up the two other primary schools in the are to ask if they have received any donations. I’m now working on getting the pencils to Nepal. Our District Governor suggested that we contact Rotary Donations In Kind, who work from South Australia. They send container loads of goods (hospital beds, walking frames, wheelchairs, computers, typewriters, etc etc) to countries throughout the world. All containers are dispatched to the care of a Rotary Club in the country of destination, so that DIK knows the equipment will not be misappropriated. There is a chance that they might have a container going to Nepal and our pencils could go into the container. I am also in the process of contacting QANTAS to see if they might consider taking them for us. I’ll let you know when I have sorted it out.”
CONGRATULATION HANNA, PEOPLE LIKE YOU CHANGE THE WORLD!
===
LATEST MEDIA COVERAGE:
To share with you another great coverage about TOPtoTOP event that was generated on Yangcheng Evening News,one of the largest circulated newspapers in China.
The half-page report published today not only talks about the family’s eco-adventure, but also links the family with the Swiss Pavilion and then switches to showcase the colorful events held in the pavilion in these two months. Besides, the journalist also selected a few eye-catching photos in the report.
As of July 9, 135 clippings have been monitored for Top to Top project with 18 new clippings which were highlighted in red in the clipping index. Among all of the media coverage, 17 are original reports while 118 are pick-ups.
What is worth highlighting here is not only the quantity of the articles but also the quality of the original reports. Jiefang Daily, Labor Daily, Daily News and Oriental Morning Post, these four mainstream general newspapers in Shanghai all generated very impressive big reports with the eye-catching picture of the family in it. Besides, as you can see from today’s news alert, China Daily has published a full-page story of this project.
Also, CCTV has given the story a 3-min-length feature report, which is an amazingly long report for an event. Looks like the expedition family conquered not only 7 Seas and the 7 Summits but also the Chinese media!
To see more details, please kindly contact Kieu Tran to download the updated version of the clipping reports (tran@swisspavilion.ch).
To share with you a TV clip about TOPtoTOP event that was generated on CCTV-News yesterday. The news report is basically followed the key message that Dario shared on the media briefing, focusing the family’s eco-adventure around the world and the significance behind it. The coverage is widely picked up by major online portals such as:
People TV;
20101 Expo TV; JXCN TV; Tudou TV…and more print: Jiefang Daily; Xinhuanet; 2010.qq.com and 1 and 2 and China News