Day 5 (5th August/ 2010) – (Reported by- Gao Pan)
Team building, Report making and visiting typical Swiss market.
Due to the heavy rain, we had to change the plan today which was sailing.Instead we did team building and making report for the last several days.
After discussion, 3 teams were built up as: Team 1, Wang Nuan from China and Christopher Ngoi from Singapore;
Team 2, Jacqueliwe Hocking from Austrilia, Tiffany Kaesermann from Japan and Gao Pan from China;
Team 3, Mohit Agarwal from India and Sandrock Macarena from Chile.
Every person will take responsibility for one single day’s report and each team will make a final presentation to summarize all the expedition.
10.00 – Team working, report making at restaurant in Maloja camping base. 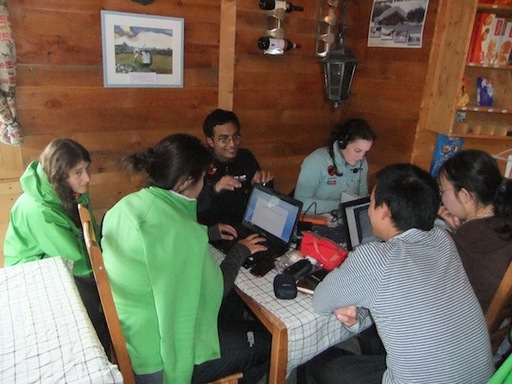 After whole night’s raining, the up part of mountains were covered with snow making the veiw more beautiful.
16.44 – left for Pontresina for the Swiss typical market
It took 55 minutes from Maloja Posta to Pontresina by bus, everywhere along the road are nice views, Lush forest, the mountain covered with snow and clear lake, which are always the precious gift from nuture. As human being, shouldn’t we return something? 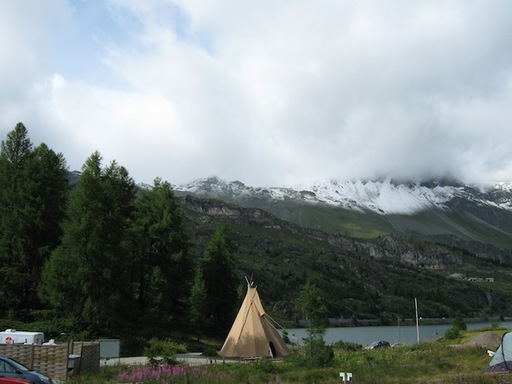 17.40 – Reached Pontresina Rando around which the fortnightly “Laret Market” is situated.
The town is not so big, no crowds of people, no shouting noise, it’s so quiet, even though today is market day! 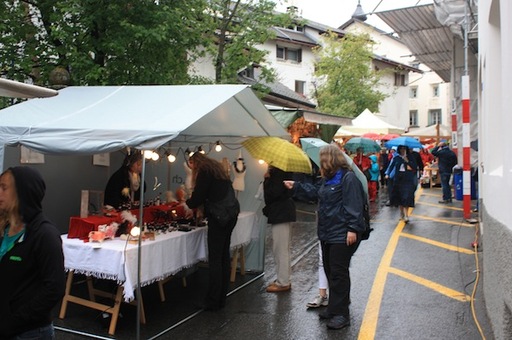 Among the 4 basic human being survival requests, living requires the most consumption of the energy and natural resource. So for the building, it’s very important to be designed and built in sustainable way to protect the nuture. 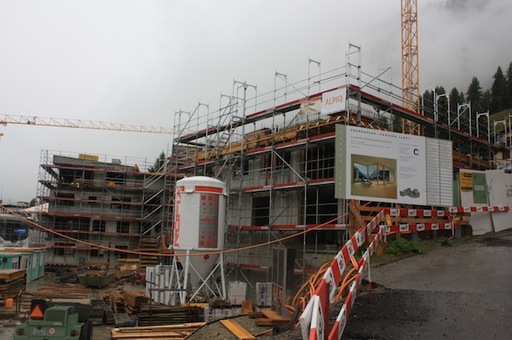 Here’s one simple example in Pontresina, not only the old type of houses, but the luxury modern hotels have windows with wood cover plates outside. It’s not only for cool façade, the most important is the wood window cover can prevent the thermal energy transfering so easily, so the energy comsumption for air conditioning can be saved. Less consumption, more enjoying of the nutrue.*
18.45 – Enjoyed the concert in the tent
Wang Nuan, Zofia, Mohit and I enjoyed the band performance so much that we missed the 19:48 bus back to Maloja.
20.48 – Left Pontresina back to Maloja Posta
After 55 minutes bus, we had to walk in dark rain and wind evening another 30 minutes back to camping base. Was hoping the tent and sleeping bag is relatively dry, haha, you can not expect more in such weather.