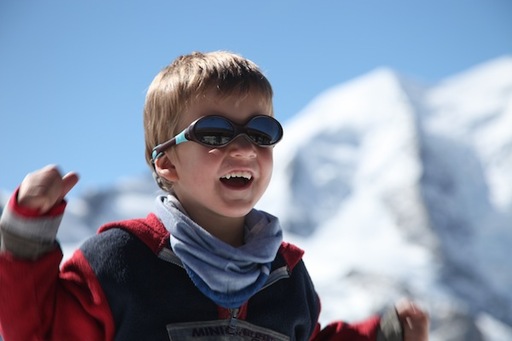 Today was, in one word; incredible!!!!
After an early morning of preparing breakfast, we took a short bus ride through to the train station. Here we enjoyed the scenery as we travelled to our second destination; Pontresina.
On the way, Dario pointed out these strange Barriers we could see on the top of the mountains as we drove past. They are designed to stop the avalanches from destroying the towns and villages below; caused by the melting permafrost. The Swiss Government has invested Billions of dollars for this solution, and the barriers can be seen all over the country!
Once we arrived, we crammed into a little cable car, along with plenty of tourists, including a large japanese tour group! The cable car ride was interesting, as we swung from side to side with thrilled cheers from the crowd! Andri and Salina got the best view sitting on the lap of the cable car driver!
When we arrived at the top- the impact of climate change was already relevant. From the cable car station on the top of the mountain at “Diavolezza” we could see these strange squares of snow. We were later told by Dario that these were large sheets of plastic; which were put over to cover the snow before summer would hit, to try to prevent the snow from melting quite as fast. Earlier, this region used to be a popular skiing destination; even in Summer; but due to Global Warming; there is not enough snow to support an industry of keen skiers!

We walked across to the other side, and took a grouped photo in front of the Bernina Mountain Range. The snow stunned everyone, and we were quite glad that it had snowed the night before!!
We learned that these were the mountains where the TOPtoTOP tradition and foundation began, and we could all tell that they meant a lot to the Swiss Members of the TOPtoTOP foundation! Specifically “Piz Palü”; one of the mountain peaks we could see clearly in the distance.
We began the decent into the glacier; what a climb! Chris was finding it difficult to keep his feet in the wet snow; and everyone had their turn at falling over into the ice!! Except the children – who all fearlessly scattered down the mountain side!!!
Once we reached the bottom; we took our first steps onto the Glacier! Dario informed us all about the dangers of the “crevasse” and how these are created. We learned that the crevasse shape changes depending where they are situated; like a “V” most of the time (running horizontally in the middle of the glacier), and an “A” shape if they are located where two glacier bodies merge.
After climbing over the first section of glacier; we started hiking up to a great viewpoint to have a break! Debbie was especially impressed by the view, and admitted that it was probably the most amazing place she had ever stopped for lunch!!!
Although is was beautiful on the top of the mountains; it was also daunting. The bold lines where the Glacier once was; seemed prevalent everywhere around us. We could see how much the glacier had decreased in size, even in a short space of only 50 or so years, and we could also see where the glacier had once expanded too through the valley. We could see smaller glaciers, that were once connected to the bigger flow; that no longer supplied the valley with water. All of this was very inspiring to continue our work for the environment; because it was so clear from this view that the environment around us was being effected drastically and on a scale that we couldn’t imagine until we had witnessed it for ourselves.

But aside from the formidable impact the effects of Climate Change had on us; we couldn’t help but to enjoy the trip through the valley! It was breathtaking!
There was a big surprise on our decent further down the glacier, when we made a stop by the river. To our astonishment; little Salina and Andri started to undress; and Dario suggested we go for a swim!!!! (Before I knew it; even I was splashing about in the FREEZING water!) It was utterly a great experience!
After our swim, we walked on the ice down towards the Morteratsch station. Melting water was everywhere, and the sound of small waterfalls and falling rocks echoed in the valley and below our feet!
When we reached the valley floor, at the end of the glacier, we started the flat walk back to the train station. There were intervals of several hundred meters, with signs telling us the previous locations of where the Glacier had once ended.
It was alarming to see that in only 1970 the Morteratsch Glacier had extended so much further!
Our original plan was to visit a cheese factory; but we had spent so much time climbing, and swimming on “the Morteratsch” we were much too late! So we hopped on a train, and after a long journey; made it back to our campsite and into our warm sleeping bags for a good night rest…