We got up very early this morning as we have to catch up the 7 o ‘clock bus.The fog was very thick looked like the cloud of the sky was kissing the Maloya lake , you could not tell the difference from the fog and cloud. If we didn’t get up that early we would not see such a significant phenomenon. 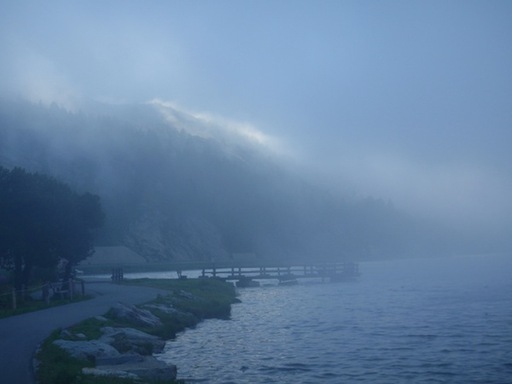 The most exiting activity for today was we took the Glacier Express from Chur to Zermatt. It’s the most unforgettable train experience in my life and will be my lifelong last memory. It is the world’s slowest express train travels what is indisputably one of the most beautiful stretches of railway in the world, linking the famous holiday resorts of St.Moritz and Zermatt. Every moment in the train we could enjoy the fabulous mountain landscape of the Swiss Alps from the train’s massive panoramic sightseeing windows. It feels like we were in the paradise all along the long journey, blue sky was hanging in the ceiling , all around you are mountains with larch woods,cabins, springs decorated in it .We can enjoy the beautiful scenery from every aspects and every moment.
We took an one -hour tour around Chur before we caught the Glacier Express from there where Dario was bored. With a history of settlements spanning approximately 5000 years, It’s also the main town in the canton of Graubunden. Today, Chur is a modern, busting town with a wealth of historical architecture, like the ancient market, cathedral and historical square and so on. It now becomes the cultural and economic centre of the Grisons, thanks to its excellent location on key transport routes through the Alps. 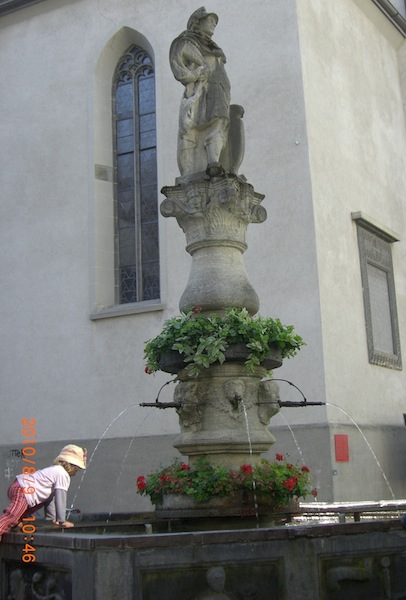 At about 12 o’clock, We took the Glacier Express from Chur,then it followed back the course of the Rhine through the gorge of Ruinaulta and climbed slowly the valley toward Ilanz (698 m/2,290 ft), Disentis/Mustér (1,142 m/3,747 ft) and Sedrun (1,404 m/4,606 ft). From Sedrun the line became steeper to finally reach its summit, the Oberalp Pass at 2,033 m (6,670 ft). From there the train entered the Canton of Uri in Central Switzerland and continues down to Andermatt (1,447 m/4,747 ft).
From Andermatt the train went forward in the Urserental valley passing the villages of Hospental (1,452 m/4,764 ft) and Realp (1,538 metres / 5,046 feet). From there the train enters the Furka Base Tunnel, leaving the old railway line which climbs the Furka Pass (operated today by the Furka Cogwheel Steam Railway), to emerge in Oberwald (1,368 m/4,488 ft) in the Goms Valley, in the Canton of Valais. The train then continues toward the Brig following the course of the Rhone and passes along the villages of Ulrichen (1,346 m/4,416 ft), Münster-Geschinen (1,359 m/4,459 ft) and Fiesch (1,049 m/3,442 ft), before going through another spiral.
From Brig (678 m/2,224 ft) the train continues to Visp (651 m/2,136 ft), then entered the valley of Mattertal and went up, passed the villages of Stalden (799 m/2,621 ft), St. Niklaus (1,127 m/3,698 ft) and Randa (1,408 m/4,619 ft), where a spectacular debris avalanche completely disconnected the railway and road in 1991. After a steeper section the train finally arrives in Zermatt at 1,616 m (5,302 ft), after more than 5 hours of travel.
Dario is a good touring guide. He told us a lot of historical stories and environmental problems about the Alps. Making the unique landscape be much vivid to us.
When the Glacier Express enters the lower part of the Rhone valley near Brig (661m). Dario told us something about the resource of the river Rhine. The Rhine is one of the lengthiest, most important river in Europe. It runs for over 1,320 kilometres -from its source in the Swiss Alps (in Switzerland), running down from the Rheinwaldhorn Glacier 3,353 m above sea level.
When we travel the Oberalp pass , the engine pulls the train up to a height of 2033m above sea level with the help of the cog wheel, making this the highest point of the journey. The other significant construction of the railway is Furka Pass (el. 2436 m.) , it is a high mountain pass in the Swiss Alps connecting Gletsch, Valais with Realp, Uri. The Furka-Oberalp-Bahn line through the Furka Tunnel bypasses the pass. It took us 20mins to pass the Furka Tunnel.
Along the railway, we passed a hydro-power station and a wind power station, which gave me a chance to know more about Swiss clean energy production. The wind power station is named Guntsch on mountain Audeomatt,we could see it when we pass the Oberalp Pass,Dario introduced it is more for research. I learnt that, the first wind energy facility in Switzerland was put into operation near Soolhof (Längenbrück) in 1986 with a capacity of 28 kilowatts. As of 2007 there are 30 wind plants in operation in Switzerland with a total capacity of 14 gigawatt hours (GWh). The largest of these is on Mont Crosin, near St Imier in the Bernese Jura: it has eight wind turbines with a total capacity of 7,660 kilowatts. Other sizeable wind plants are located in Collonges (canton of Valais), Entlebuch (canton of Lucerne) and on the Gütsch above Andermatt (canton of Uri). 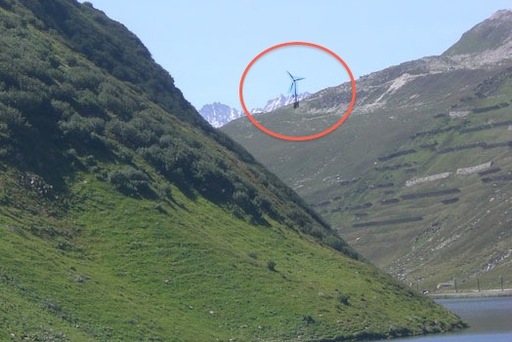 What’s more, we learnt that nature can at times be violent in this alpine country. People here have been living with these dangers for centuries. Dario told us a true story witted by himself 5 years ago. He told us how the local people protect themselves against avalanche. They prevent the snow from sliding and rocks from rumbling into the valley by building barriers made by iron, they store rainwater and release it gradually however heavily fell by digging large holes in the mountain. As long as the14th century people living in the Alps banned anyone from felling trees in the forests that protected their villages. The first Swiss Law on environmental protection I learnt from the Internet is the Forest Law of 1876, which was aimed at averting the natural hazards.
It was really a relax day for us all, fulfilled with fabulous Alps landscape and abundant environmental knowledge. I think the Swiss people is so wisdom that they develop the Alps tourism by building this splendid Glacier Express to attract people from every corner of the world for a unique experience, they explore the green energy and also know how to protect the natural hazardous ,living harmoniously with the nature.