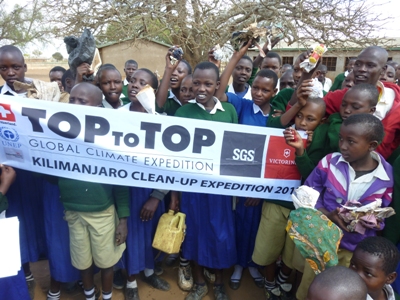 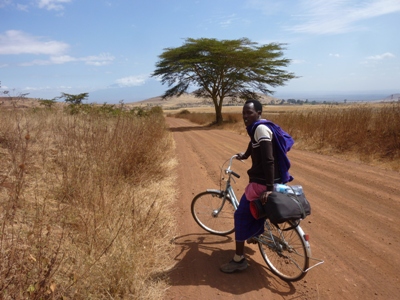 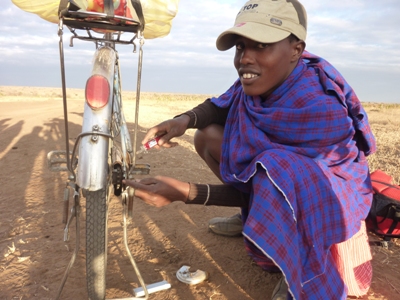 We were lucky to have a “Victorinox” and not many repairs. 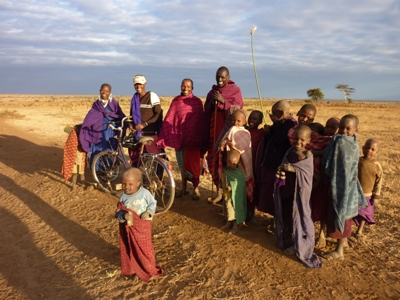 traversing Maasai country
We started at the Tanzanian coast at the yacht club in Tanga where we plan to pass with Pachamama in October.
We said goodbye to our TOPtoTOP volunteers Gabi, Nicole, Olivier and Stephane who joined us to this point. – We will meet them again soon for the clean-up on Mount Kilimanjaro. – We from the cycling team (Kalanga and Dario) are travelling light on the bike, carring just the most important equipment to camp outside and are organizing the food on the way.
Arriving at Kalanga’s family boma, where TOPtoTOP danated the 2 bikes.
On the trip we made it to the home village of Kalanga. Loiborsoit A is a great place to experience the Maasai culture. Kalanga’s brother Lengai runs a guest hose. It was build thanks to the support of the NGO “ENKAINA-E-RETOTO“. In partnership with “ENKAINA-E-RETOTO” and the Maasai, TOPtoTOP likes to support the village Loiborsoit A that it becomes a “TOP best practice example” how to maintain their tradition for a sustainable future for people and land. – Like in other destinations on the expedition, Loiborsoit A will share the knowlege of old sustainable technologies combained with new renewable innovations and will inspire other villages in the region to go the same path: this for the ultimate goal to get a better planet for all of us. Here some images: 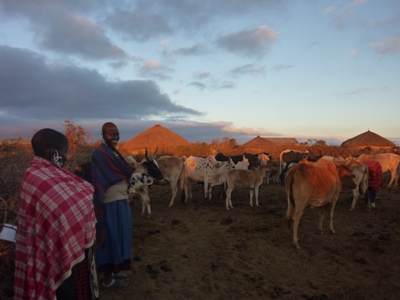 The Maasai are living in bomas: The cows are protected in the center during the night and surrounded by the houses of the different family members. 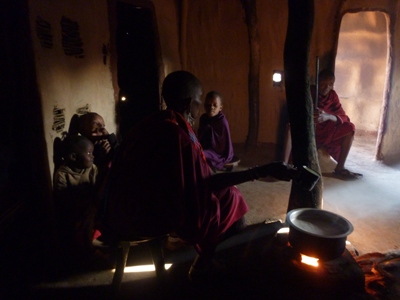 Insight a Maasai house it is always cool during the day and warm at night. 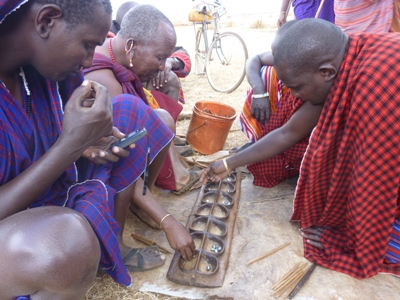 Maasai are happy people and love to sing, dance and play. 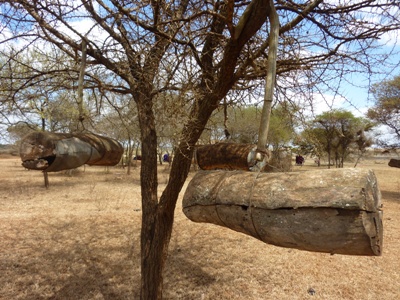 Maasai live from meat and milk. The milk they put in “Kalabas”, where it stays fresh for 3 days. They also collect honey (see picture above) and Oloisuki. The Oloisuki fruit collection managed by Lengai is another very good and sustainable project of “ENKAINA-E-RETOTO”. 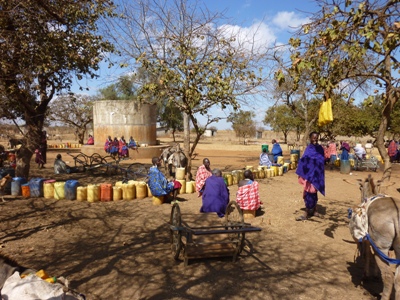 The biggest problem is water!
Climate changes brought more draughts in the region. In 2009 a Maasai lost all his animals and did suicide. They are not allowed anymore to enter the Tarangire National Park to water their cows, like they did for centuries. Furthermore lions coming out of the Park become more and more a problem. Kalanga’s father just lost 2 cows this week. It will be essential for the survival of the Massai that part of the big money from the “safari tourism industry” are compensated and i.e. used to build sufficient water holes for the Maasai along the Park borders. That might also benefit the wildlife. – It looks like that 2011 will be a disaster again – in Somalia already is! 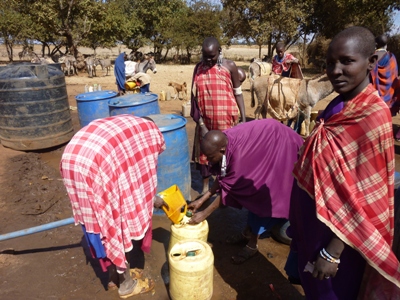 Women collecting water. A good solution would be a Katadyn water filter for each family to produce drinking water.
The borehole pumps, tubes and tanks are in bad conditions and urgently need maintenance. Funds of approx. US 5000. – are needed to go for the most important repairs. In a long term it would be great to make an already drilled borehole operational. This will cost another USD 15’000.- for a new pump and solar power station. 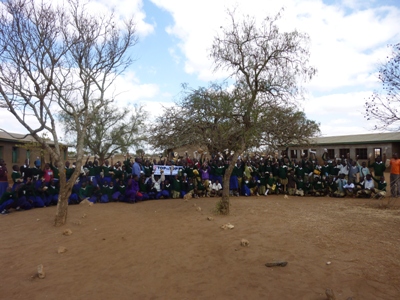 Proud students after the first clean up.
TOPtoTOP was in the school in Loiborsoit A. Only half of the 667 students can afford an exercise book to make notes. That’s half a dollar, – so a total of USD 200.- per year would improve the schooling efficiency a lot. 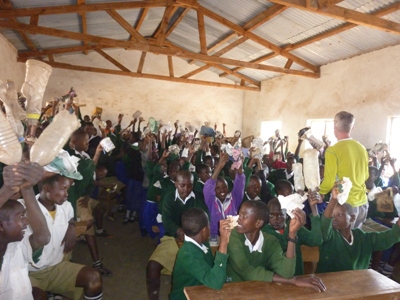 Recycling work shop
In this school we would like to build the “top practice example” in the region. Here some ideas:
– installing a biogas cooking facility for the 2 meals served to the students: This will help to reduce the tree cutting.
– building a water collecting system on the roofs of the class rooms leading to a water tank to fight the water shortage. 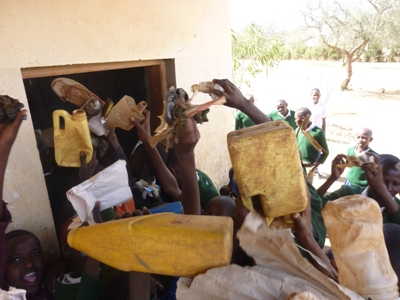 Clean up
Londorossi Gate Kilimanjaro – stop cycling and start climbing!
Finally we made it cycling to the Londorossi Gate on Kilimanjaro on approx. 2200 m and approx. 400 km from the sea.
Here the road stops and we start on Tuesday with TOPtoTOP volunteers Gabi, Nicole, Franz, Carl, Carl jun., Johanna, Marie-Louise, Veronika, Robert, Oliver, Kalanga, Stephane and many locals the “TOPtoTOP Clean-Up Kilimanjaro Expedition 2011”. Kalanga will be the first Maasai cycling from the sea to the TOP of Africa.
What you can do:
– Come to Loiborsoit A as a TOP-volunteer and help to realize above ideas? Get in contact with Lengai trough lengai80(at)hotmail.com or info(at)massailand.com
– Donate to above programs: Please mention “for Maasai project 2011” and may specify
– Can somebody approach the solar company “3S” in Lyss, Switzerland and ask if they are ready to contribute some solar panels to run a water pump?*
– Can somebody find out how we best repair a hole in this 10’000 l plastic tank from the company “Kiboko Water Tank – Chapa Kiboko”?
– Can somebody approach the company “Geberit” in Jona, Switzerland for new tubes to lead from the pump to the tank?*
* Exact figures like how many kW solar power, tube length and diameters etc. please contact info(at)massailand.com
Note:
Because of the pirate situation in the Northern Indian Ocean, the cyclone season in the Southern Indian Ocean and the birth of Alegra, we decided to go to the TOP of Africa just after the baptism of Alegra and profit from the good climbing condition. In August we return to the boat in Singapore and start to sail to Africa on a Southerly route to avoid the pirates. In this time of the year the sea and weather conditions are also much better.