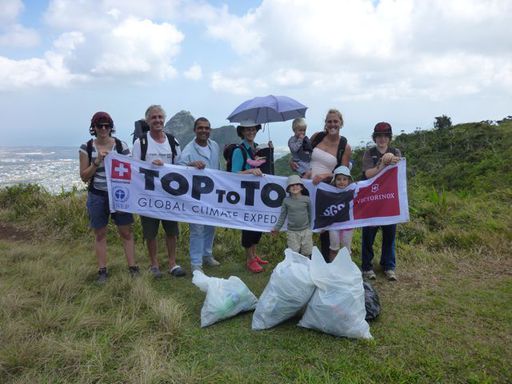 Hello, my name is Gillen. I live on a catamaran called Chaotic Harmony and we are sailing around the world for now. I come from Darwin in the Northern Territory of Australia.
We first met the family of Dario, Sabine, Salina, Andri and Noe from Top to Top at Langkawi in Malaysia in November 2010 but since then they have a new baby girl called Alegra. They were visiting schools to tell the dangers of plastic in the water and how it affects the turtles and sea life and collecting the beach rubbish. The kids like to come to my boat to watch DVD’s and play games.
We met up with ìTop to Topî again at Rodriguez Island in the Indian Ocean and again a few days later at Mauritius where we currently are berthed in a marina together at Port Louis.
Dario asked our family if we wanted to climb a mountain with him and his family on Mauritius and Celesta from Sogno Díazul and on Thursday the 22nd September 2011 I climbed my first mountain all the way to the sumit. The mountain is called Mount Le Pouce which means “The Thumb”. My family stayed on our boat and did some jobs that needed to be done like the dishes.
Most of the mountain is just walking until we got near the summit where we had to start climbing. The paths are very wide until about half way when they got narrower and became one person only so we had to walk in line. We saw a very important message on the way up!
On the way back down we took out garbage bags and collected as much rubbish as we could. Plastic water bottles, chip packets, paper and tissues were the main bits of rubbish. We got about 5 bags of rubbish from the one trail down.
When we got to a clearing at about the third the way up we went down a different path which took us on a winding trail of thick, dense jungle and eventually led to a place that looks like the Australian bush with eucalyptus and acacia trees.
We walked about 4 kilometers down and through the foothills until we reached the edge of the city and then we got a taxi cab back to the boats at the marina. Selina and Andri fell asleep as we were all very tired from walking and picking up other peoples rubbish.
It was a great day and even the taxi driver that took us to the start of the trail climbed with us all the way. We ate lunch at the summit and even saw about 8 monkeys but they did not get my apple core. I shared my chocolate with Selina and Andri and the taxi driver.
When I got home my feet were white from being wet from the wet grass and I have two big blisters but it was still good fun but tiring so today I am resting.
I think the Top to Top expedition is great and people should not litter our world.
This is Gillen signing off. Over and Out. 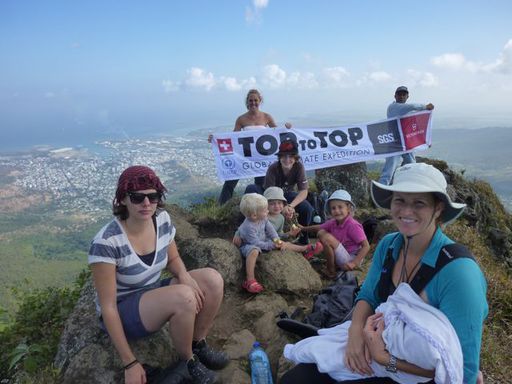