Video: Sailing to South Africa
See the video part 1 (Dario) and video part 2 (Sabine, Dominique) and the video part 3 (Michael, Ghadi) just before we left Mauritius! Many thanks to TOPtoTOP member Rene Soobaroyen in Mauritius to edit it.
Check out the Press Release! 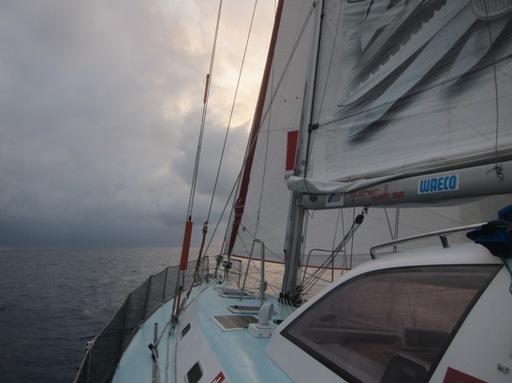 calm minutes before the blow 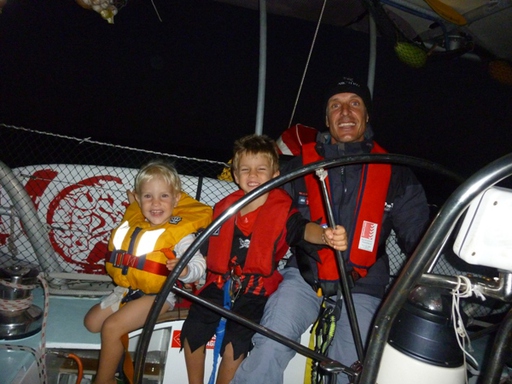 Andri’s 5th birthday at S 22.16 E053.46 at the 25th of October on the way from La Reunion to South Africa
On the 24th of October we tried the last time to calibrate the Raymarine Fluxgate compass of our autopilot in the coastal waters of La Reunion without success. After several trials we set sail and decided to hand steer to South Africa knowing that it will be a tuff task. Damage in our main sail was another disappointment and we couldn’t reef it out totally.
We were blessed with light winds down to the Southern tip of Madagascar, so that our crew got some exercise to steer the boat. On this leg we also celebrated Andri’s 5th birthday on the 25th of October in the middle of the Indian Ocean. 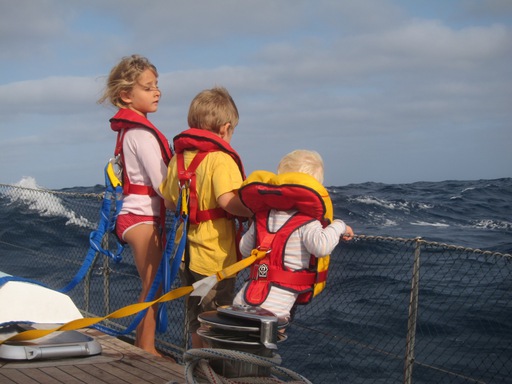 there was a big cargo ship with the same name like “Salina”
The next step for the crew was to handle the waves in the choppy sea around Madagascar. Afterwards we were pushed North towards Mozambique, because of Southerly winds picking in. Crossing the Mozambique channel we passed a Cargo ship with the name “Helvetia”(=Switzerland) and soon after another cargo ship with the name “Salina” (call sign C6V2064), – same name like our first child. Our second daughter Alegra did very well with 4 months and grow a lot during the voyage thanks to Sabine’s milk. Noe was busy with dad to help with small repairs. Salina and Andri had every day school with our volunteer and teacher Bianca, while Dominique and Michael are helming. 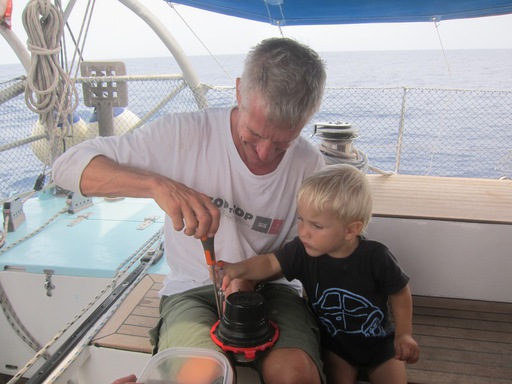 Noe helps Dario to repair the compass
Approaching the African coast we had only a 24 h weather window for the 200nm to Richards Bay. There is now shelter in between, but the Agulhas current and a strong northerly blow pushed us down South. There were times we averaged 9 to 10 knots! On the way down we heard from the weather radio net “Peri Peri” (8101 KHz at 15 h UTC), that the yacht Wizard sunk at S 26.45.38 E039.45.29, where we have been some days before. The EPIRB worked and all 5 crew were rescued by a big cargo ship from their life raft. – On this stage I like to send many thanks to the “Peri Peri” Net for its excellent service.
We made landfall at 24 hours UTC on the 3th of November in Richards Bay, South Africa (S28.47E032.04). The entrance was not easy at night with 30kn of wind, a current setting South and the many lights from this big port .
On the passage, our course was mainly defined to find the best course to hand steer around the low and high pressure systems coming in a steady stream from the west. It worked out as an excellent strategy to avoid bad sea – and weather conditions. In higher latitudes where you experience more sever and variable weather, it is THE way to go … instead to set a defined route and go blind for it.
The biggest danger on this passage is when you approach the coast of South Africa and you get a SW gale against the Agulhas current. Abnormal waves of up to 20 meters in height are encountered in the past! Some boats we met had a terrible time either South of Madagascar dealing with a confusing sea, because of the continental shelf sticking out far South or/and crossing the Agulhas current in a southwesterly blow (Southern bastard). The only way to avoid these hazards are to have at least 100 nm distance to the Southern tip of Madagascar and not to enter the Agulhas current when the wind swings to the SW…and always “reef early and not too late”…
Now we are ready and keen to start our project in this wonderful country South Africa…
We just got the message that another boat with 5 people on board sunk yesterday while sailing S against the SW winds and another boat lost its steering. 5 minutes ago we heared a distress call on channel 16 and the Richards Bay rescue team went out to support them.
Many thanks to Dominique & Michael who are now leaving us and have been with us from Singapore and the past 5,283 nautical miles! They did an excellent job and became close friends. We hope they join the expedition again very soon! In Singapore they are board members of TOPtoTOP Asia and go to follow up the TOPtoTOP activities in Asia. 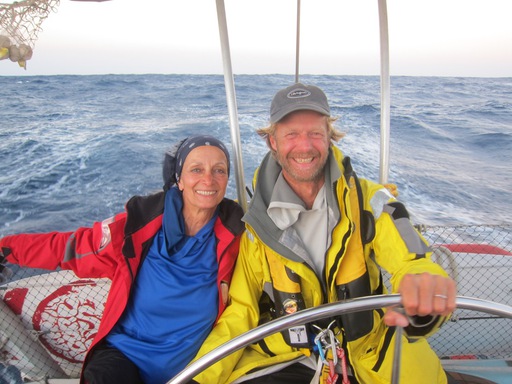