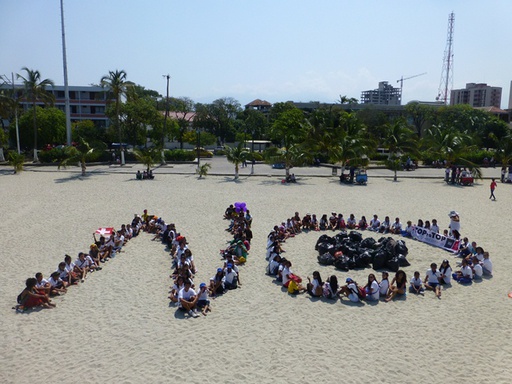 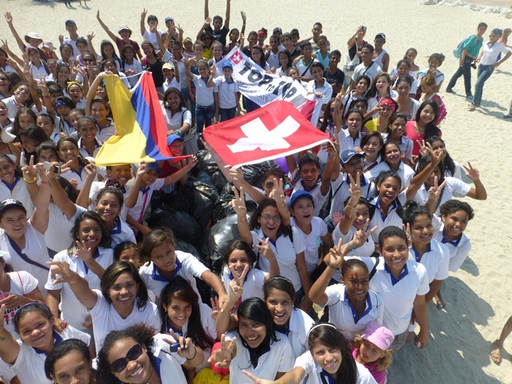 Saturday 23th of February: Expecting around 20 people we set off to the meeting point, we even had a plan if only five people showed up. No one was at the meeting point so we went on to the beach to prepare the bases for the planned contest.
At the beach we got a slight shock when we found around 300 students waiting for us. We had never even dared to think of the number of participants being in the hundreds. Nevertheless we started with a competition Switzerland against Columbia who could collect more rubbish in ten minutes. 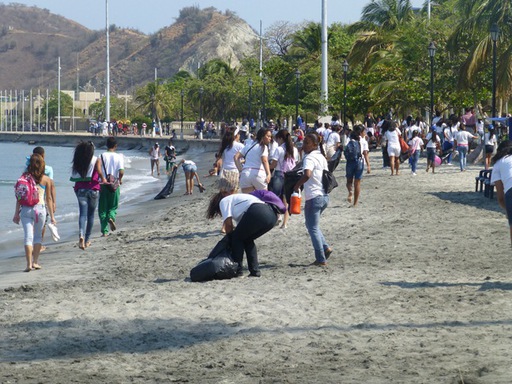 Again we’d been quite skeptical about finding any rubbish as the beach was very clean, there are people employed to collect the rubbish and there are a lot of bins next to the beach (and in general all around the town).
Yet the participants were extremely enthusiastic and all ran off to find as much rubbish as possible. Some emptied the existing bins to get more rubbish; others went beyond the set boundaries to get all the rubbish hidden between the stones. Ten minutes turned into thirty minutes and soon two large piles of full bin bags could be found around the two flags that served as the bases. Switzerland won by quite a few bags.
Unfortunately, time, weather and the logistics of organizing so many people didn’t allow for us to do the second more creative contest. Instead we did a big NO PLASTIC! 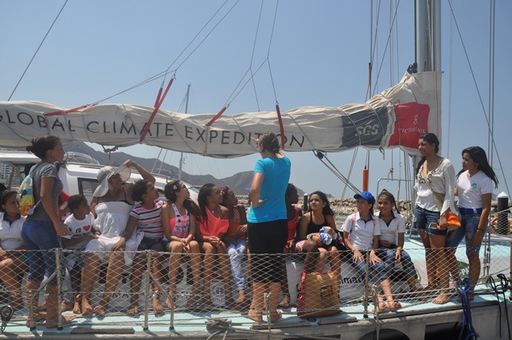 Afterwards, all the students got a quick tour of the boat to end this very successful clean-up. The plan is that this was the first clean-up in a series of clean-ups here in Santa Marta that will take place on every first Saturday of the month. The official meeting point will be the beach next to the Marina Santa Marta at 9am. We would like to thank Maria Janeth for volunteering to be the coordinator for these following clean-ups.
In the afternoon we went to the Gratiferia held at the Biyuka School. The idea of the gratiferia is that we shouldn’t throw away items that are still intact and could be used by others who need them. So everyone brings some things they don’t need and can take what they need, like a flea market but all for free. A few of the children going to this school had visited Pachamama the day before. We paid our contribution by doing a “chiaiai”. The children loved this school; Salina even said it was the best she’d ever been to.
Thanks to Maria Janeth and her family and Oscar we got a chance to see a little of the surrounding area of Santa Marta- Taganga and Minca. We spent two lovely days with them.
We would also like to say a big thank you to Manuel Davila, the President, and Mauricio Cucalon Micolta, the Sales Manager, and all the staff of the Marina Santa Marta. We have had a great time here and we can only recommend this Marina.