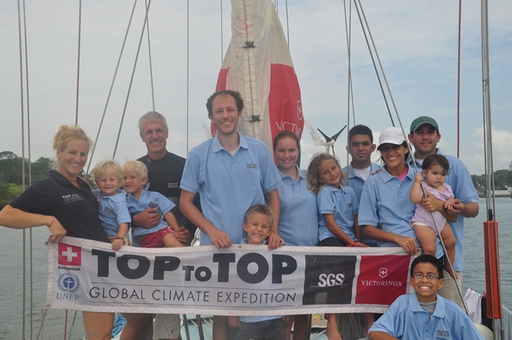 More pictures here!
Ever since we left Trinidad the kids asked every time: “Is this the Panama Canal?” – Now finally we could answer: “Yes!”
Once the special extra fenders and ropes had arrived, we busied ourselves by cleaning the boat ready to host 14 people plus a pilot for around 24 hours.
All aboard we sailed half an hour to an anchorage near to the entrance of the canal to eat, meet our pilot and get an introduction course on line handling from Dario:
• Fingers never less than 10cm away from the clamps – or you could lose your fingers
• Lines never too tight – or the force could rip the clamp out of the hull of the boat
• All lines should be slacked and tightened simultaneously – or the boat could get smashed against the wall
• Never ever go in the water! – You are dead for sure.
Unfortunately, the boat dropping off the pilot rammed into our boat a little and managed to bend our stanchion inwards by about 10 cm. When we asked what options we had to take the case further, we realised quite quickly none that wouldn’t cost more than the estimated cost for the repairs. Nevertheless we called the port captain Mr. Cap. Alberto Herrera and a boat came to meet us on the lake Gatun and advised us on what further steps to take. They basically advise us to write a letter of protest and tell them what happened so that the incident would be in the archives. Heeding their advise Dario wrote a letter the same night to Cap. Miguel Rodriguez and handed it over the next morning. Our request of compensation was not answered till today, even we emailed the Panama Canal Authorities already twice? 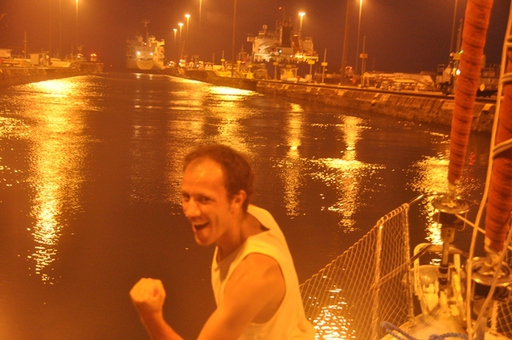 line handler Johannes
We went through the first three locks to the Lake Gatun tied to two catamarans; the SY Yam Yam (a Swiss/Norwegian catamaran) and another French one. We were on the left hand side, which meant we only had two instead of four lines to handle. A mistake could have cost the value of the three boats, which was around 2 million dollars. We had a few close shaves due to some of the line handlers on the side of the canal being a little slow and the three pilots, one on each boat, shouting different instructions. But we made it through without any further damage. It’s impressive to see how fast the water rises (and sinks – the next day).
In the evening on the lake Gatun we had another funny incident when, what looked like a buoy, turned out to be one of our floating fenders. Thankfully, Guillermo wasn’t scared of the crocodiles, that are said to live in the lake, and jumped in without hesitation thereby saving the day.
Early the next morning we awoke from our various sleeping places all over the boat and set off towards the last three locks. After around five hours of crossing the beautiful Lake Gatun, we once again found ourselves tied to the SY Yam Yam and began the descent.
Without any problems whatsoever, at around two o’clock we saw the huge gates of the last lock open in front of us: we had made it through the Panama Canal to the Pacific! See the difference when Sabine and Dario transited the Panama Canal the first time on the 24th of April 2004: 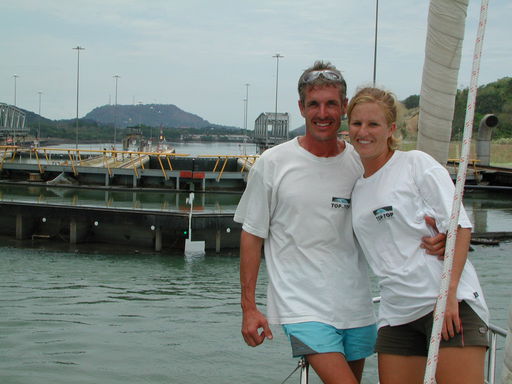 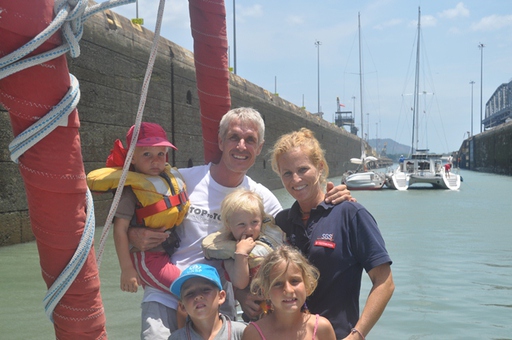 Sabine & Dario 20013; what happens without TV…
On our way to the Marina we passed under the famous ‘Puente de las Américas’ (an important part of the Pan Americana), which was quite extraordinary.
It was a pleasure to have Karen, Guillermo, Anthony, Gabi, Jael and Aldair with us for this experience. 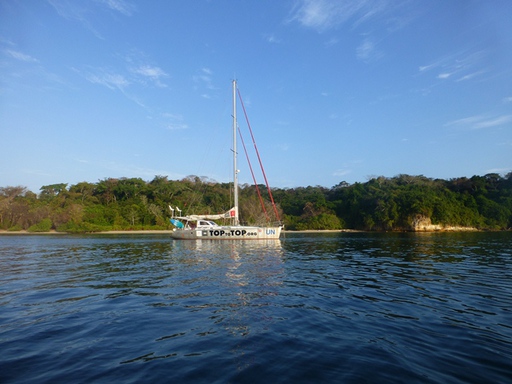 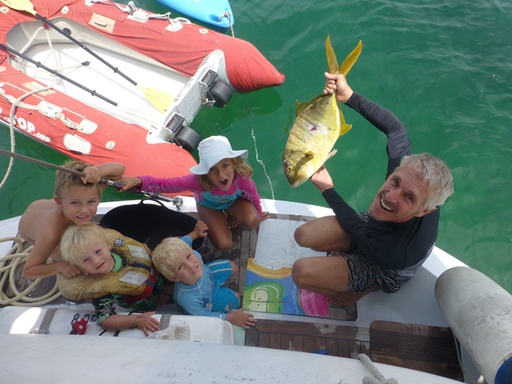 our dinner
Soon after we left to clean up Las Perlas and met there between Chapera and MogoMogo Island SY Geronimo. We last saw them in St. Helena Island one year ago.
While exploring the islands we kajaked accidently to two beaches where the US TV is filming the “Survivor”series. Where we played stupid, but soon chased us away. There is no coconut tree on the island so they have to bring some coconut by speedboat to play “Robinson”. A local told us on MogoMogo that they move every evening to Contadora Isalnd to sleep in a nice hotel…. 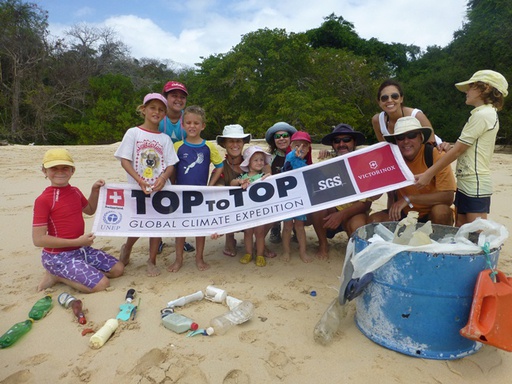