Toptotop helps international pacific research center in Hawaii to do an analysis of cesium radioisotopes, oil film, marine debris, drifters, and radionuclides in seawater in the north pacific. While we are sailing to Alaska and then again southbound to Hawaii, we will collect surface water samples. While IPRC found Fukushima related radionuclides, the levels were rather low (< 12 Bq/m3 of each isotope).
However, IPRC know based on results from other researchers that in some places radioactivity was much higher, about 1,000 times the normal. So there are some presumptions that the current push it northward. According to some models, if somewhere in the north pacific is a higher level of radioactivity, it should be between 35' and 45' degree nord. But it's hard to track the debris field in the ocean.
There is no danger for us or for the population. Jan Hafner (researcher from the IPRC) told me that if there is some radioactivity, it will have a lower level that the radioactivity in our body. 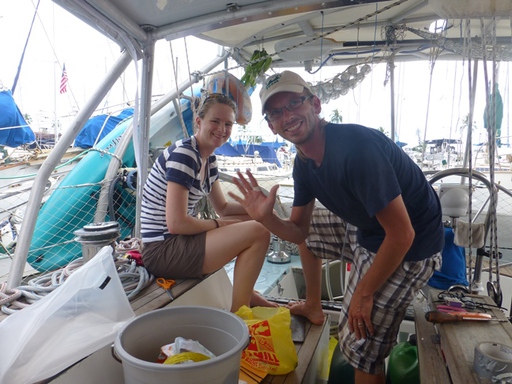 Jan Kamenik came to install the pomp and the filter for collecting the seawater samples. First, samples are filtered to remove undissolved particles. Clear water is then passed through a can. Then we will fix the can on the outside of the boat. The water will flow out through a catalyzer which will collect or measure the level of radioactivity.
For more information over the partnership and the research program from IPRC, have a look to the followings links:
partnership toptotop-IPRC.docx
tsunami video
A short description about the radioactive cesium analysis