Cooper gave Christina and me a lesson how to prepare the salmon for smoke. During our work we saw a great spectacle, a seal and five eagles were hunting fish in the harbor. 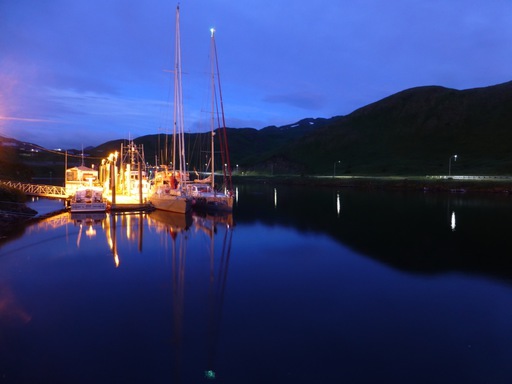 Our trip along the Aleutian Island, continue at midnight. Thanks a lot for the nice journey to Dutch Harbor. We appreciated it a lot and we look forward to see you again in 2015. Dario thinks to overwinter in Dutch Harbor in two years. Robe drove us over a pass to the summer bay, so that we could see something more than the village from this beautiful island.
The impact of the WWII is still visible in Dutch Harbor. Everywhere the pillboxes and bunkers remind at the WWII. In 1938 U.S. military decided to construct the main naval base and an air station. 3rd June 1942 the Japanese attacked the Aleutian Islands. Their mission was to neutralize the air base and destroy its ability to attack Japan. The native Unangan people were evacuated from the entire chain. The Japanese had occupied two islands on the western end of the chain, Attu and Kiska. In 1943, the Americans reconquered the islands. 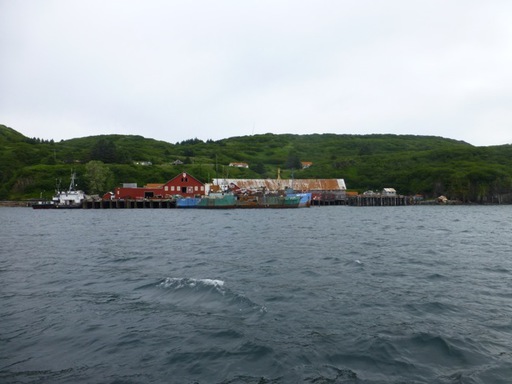 Passing the Akutan pass in direction to Sand Point, the high waves prevent to sail fast as expect. So we anchored in Unga. But except of some remote houses there was not so much in the bay. Unfortunately the fog block the view of the islands.
In Chignik we tried to go in the harbor but the wind (45kn) which blows through the valleys and around the caps prevent to go on land. Chignik was like a boarder in two ways. Around Chignik, it was the first time that 3 humpback whales followed us and since then we could see their flukes again and again. And we enjoyed the sun and warm temperature. In the night we saw for the first time star sky and full moon. Now, sailing along the islands is beautiful. 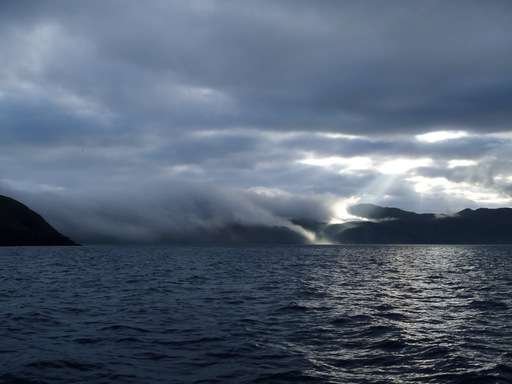 The Alaska Range keeps marching southwest to merge with the Aleutian Range and form the vertebrae of the Alaska Peninsula, Alaska’s rugged arm that reaches out for the Aleutian Islands. We can find here the most active volcanoes. The highest was on the Unalaska Island. Dario looks forward to climb it. 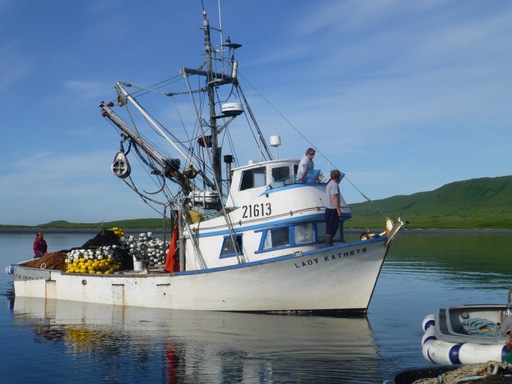 The next stop was Kodiak Island. Kodiak is the second largest island in the U.S. after Big Island of Hawaii. In Kaguyak bay we slept the first time next to 4 fishing vessels. They worked with Victorinox knifes and one fisherman told us that the night before he married, he dreamed that he cut the umbilical core of this baby with a Victorinox knife. But the doctor didn’t allow it. He was a bit jealous when Sabine told him that Dario did so. For lunch we anchored in Three Saints bay. The valley looks like Switzerland if the water would flow the land until 2000m over sea. We dare to go on land even if there were a lots of bears on this island. Dario toke the pistol, pepper spray and a horn for protection. 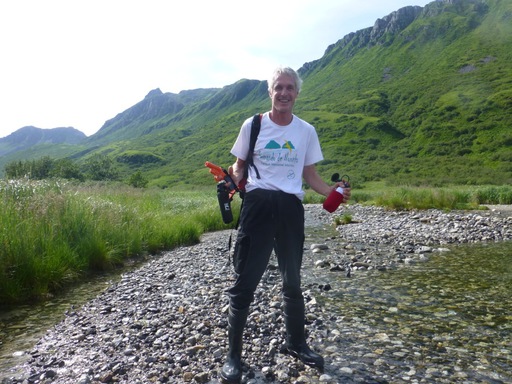 Luckily we didn’t cross one but we saw the bear mark on the floor.
In the fjords it’s difficult to sail and there was also no wind, so we went under motor to Old Harbor. 200 people live in this fisher village. 1964 North America’s worst earthquake took place. The tsunami destroyed many villages, also the two villages we visited have been destroyed. Old Harbor was reconstructed and a lot of natives from the other villages moved here. This lovely place is only accessible by airplane or vessel. 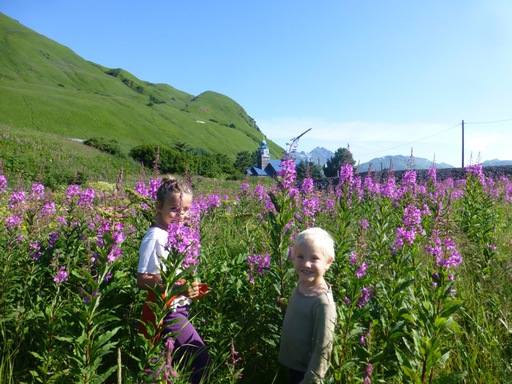 The Orthodox Church caught our view. The most natives were orthodox. The native language (Aleutiiq) was influenced by Russian, when the islands belonged to Russia. Even today, the people use Russian words for the things, which don’t have a name in the aleutiiq language.
In the afternoon we hiked for collecting strawberry and raspberry. These were two beautiful days, which is very rare in this season and region. 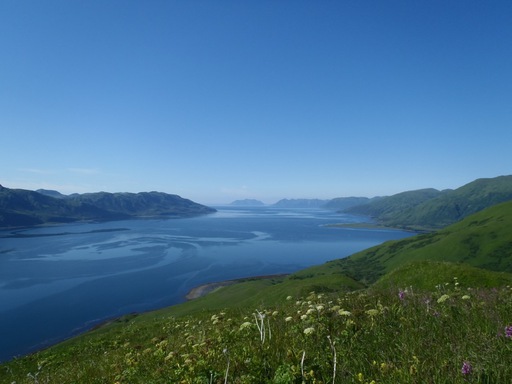 In Kodiak there is a crew change. I leave the boat and Nikolai comes.