Our phone number is +1 907 51 2 77 11
Report coming soon. Check already the pictures here!
On the 27th of July we had to say goodbye to Nicole. She has been on the boat for two months and we could not avoid some tears while saying goodbye. In Kodiak we had the chance to have a very generous harbormaster. He and his wife gave us a lot of vegetables, which we had not eaten for weeks. Thanks a lot!

Then we left Kodiak and hissed sails for Geographic Harbor. On this way we went through the “whale passage”, where we did not see any whales but a lot of river otters. We could observe these funny animals several times. It seemed that they were enjoying the nice weather as much as we are enjoying it.


Some Alaskan people told us, that this is the best summer they had since thirty years. On the half way to Geographic Harbor we stopped and anchored in a nice bay called Bare Island. The kids had fun to explore the near island but we did not see any bears yet. 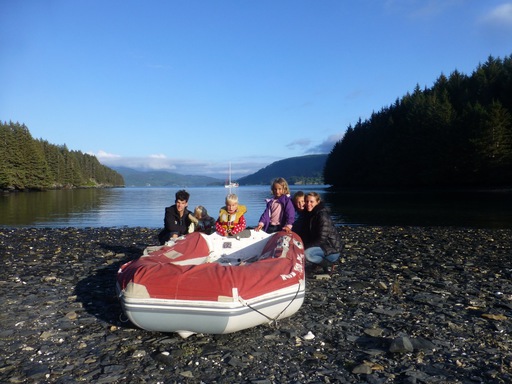 The next day we continued westward to Geographic Harbor. This is a lovely place on the Alaska Peninsula where we met the first yacht after Hawaii: SY Patago from France with Alain and Sophie on board.

Among sailors it is known, that you can often see grizzlys there. Even while anchoring we saw the first brown bear walking along the shore. A bit later in the evening, we took the tender and went a little closer to the shore. Very soon another bear appeared and we could observe him for a long time. These animals are really impressive. They look like some sweet teddy bears but we all knew better and went not too close…

The next day they we took the tender for another trip and in another bay we saw four more bears. We even could observe one fishing salmon. In the later afternoon we left geographic harbor and were happy, that we could see so many bears!
The next destination was Seldovia. On the way we anchored one more time in Devils Cove with huge glaciers in the background and it was obvious that they are retreating fast. We walked along the shore but had no luck to see bears.

After we had dinner we continued to Seldovia. This can be a quiet tricky passage over Cooks Inlet. We had very good wind and did the 120 nm in 15 hours; 3 waves made it all over the boat from bow to stern. Seldovia is a nice little village with about 250 people. They even have a playground here, which of course was a big sensation for Salina, Andri, Noe and Allegra. They already found friends here and enjoy playing with them. 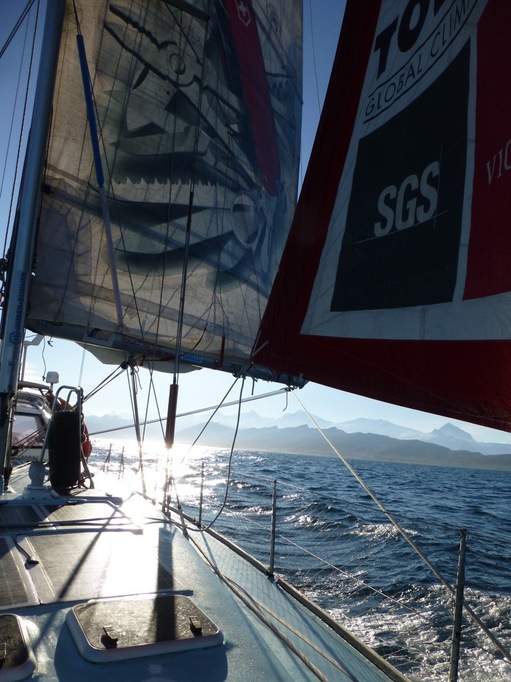 Michael and Dominique joined us for several months in 2011 from Singapore to South Africa. Today we got this very sad message from Michael:
“At 9:15 this morning of 27 July 2013 in Bad Salzhausen, German, Dominique closed her eyes, spread her wings and departed.
Please take all the energy, prayer and focus you’ve been sending her for healing and release it in joy for the wonderful life she has led and focus it on the transition she must now make to that which is next…”
Michael,we are in tears and have no words. We were always in hope and did not expect that outcome, but we know that Dominique spread her wings and follows us again… We send you all the strength from all of us to support you in this very hard lost….