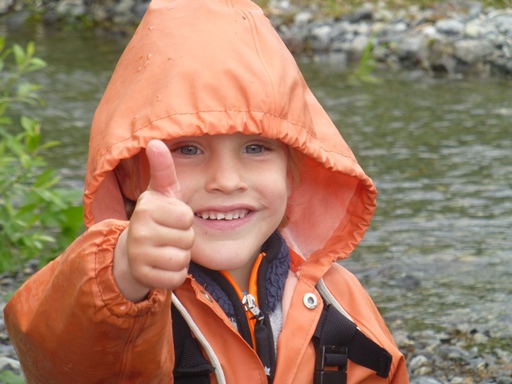 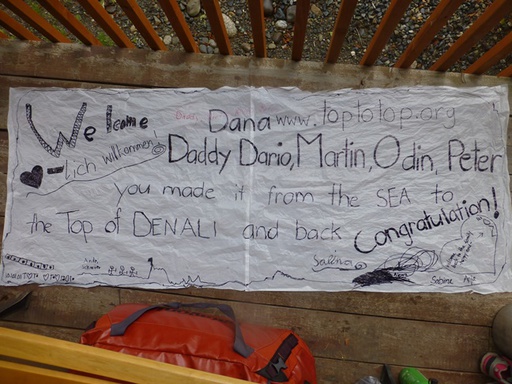 After sailing into Prince William Sound and Whittier Harbor we hiked Portage Pass, cycled over the frozen Portage Lake and further to Anchorage and Talkeetna and Kroto Creek near Petersville and back to Whittier (see previous reports). 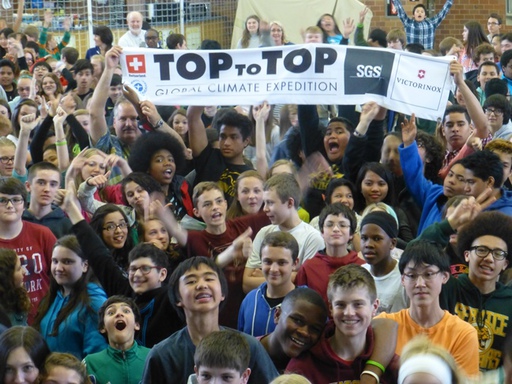 We visited approx. a total of 3000 students on the way towards Denali. 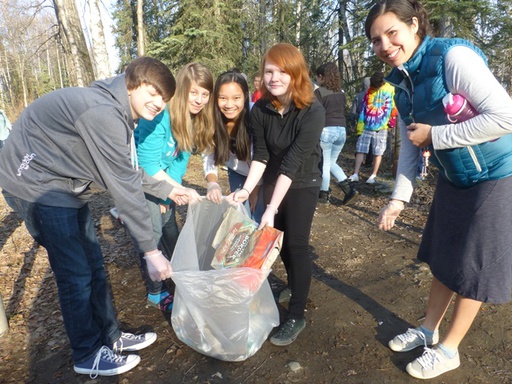 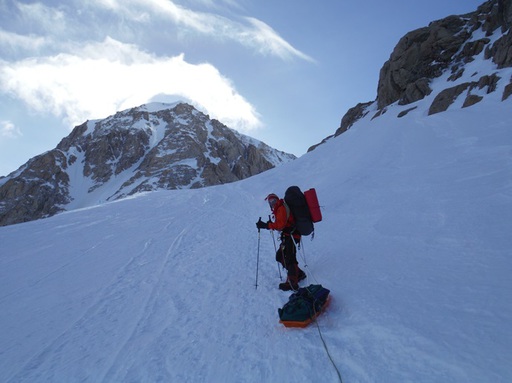 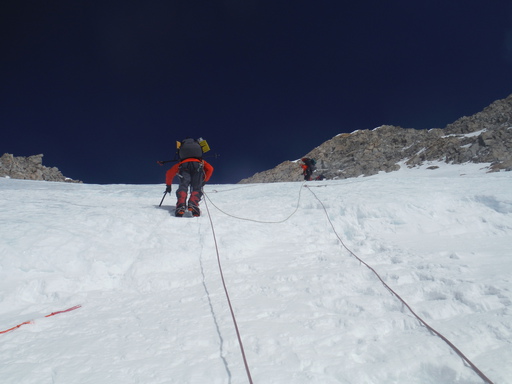 up the Head Wall 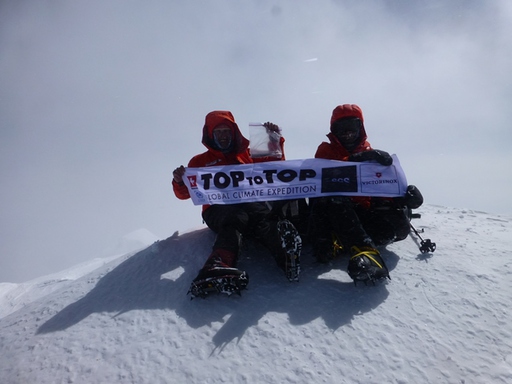 Dario and Martin on the TOP
From the point we stopped cycling, we skied up the whole Kahiltna Glacier to Base Camp in 5 days and have been on TOP of America 12 days after. We reached the top on the 23rd of May, 3 p.m. and learned that only 5 climbers made it before us this year. 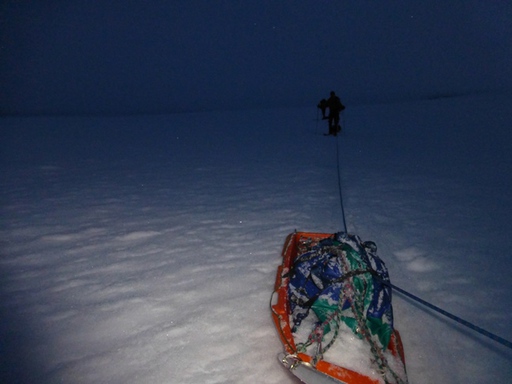 20h down Kahiltna Glacier
We climbed the same day down to our camp at 14000 feet and skied the next day for 20 hours through the night to little Switzerland. This because the snow was pretty bad and so the crevasse danger high on the lower Kahiltna Glacier. We did not continue on the Kahiltna like when we walked in. Instead we went up Pika Glacier, a side arm of the Kahiltna, and towards Excit Pass. Many thanks to Paul dropping us some pack rafts. 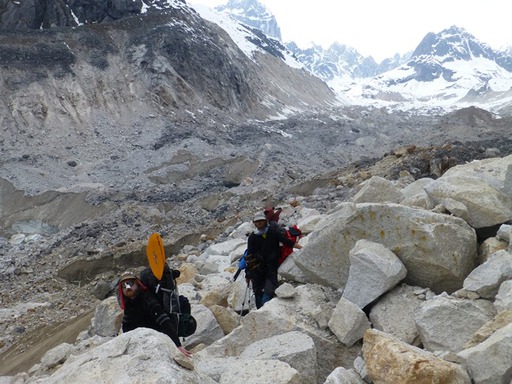 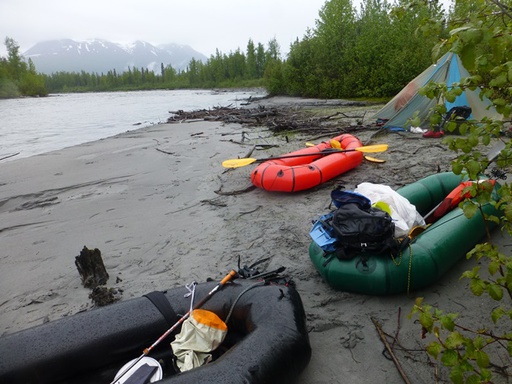 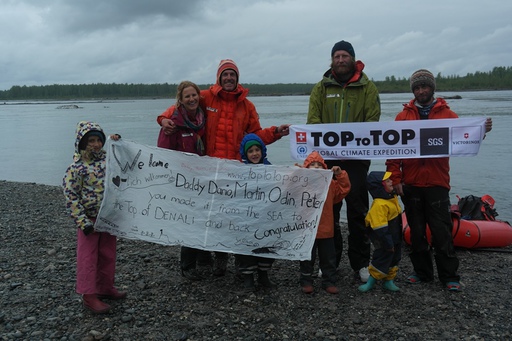 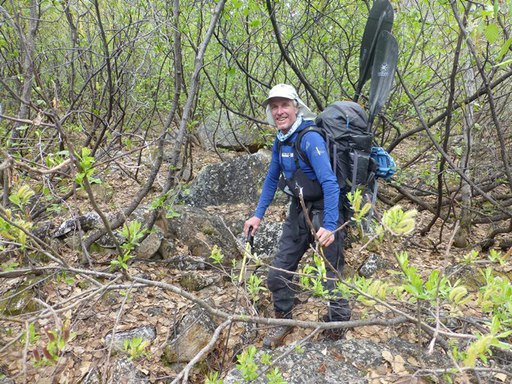 Surrounded by friends
The biggest challenges for me was to get through the dense forest (willows) to access and leave the glaciers on the walk out. I start thinking that all this small trees love me and like to hug me. Like this it became fun. The coldest was on top, but I felt much colder at the beginning cycling from the ocean to Denali and at the end of the trip pack rafting nearly 2 days in this icy water. 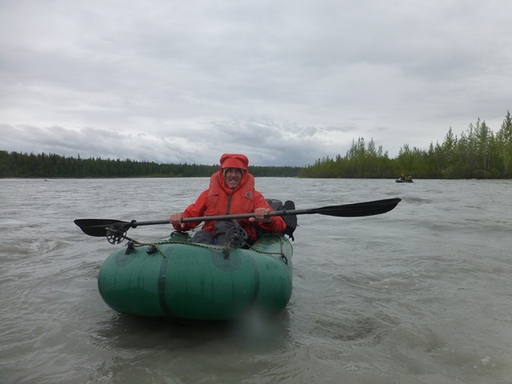 I used my pack raft as a tent to safe weight on the walk out: 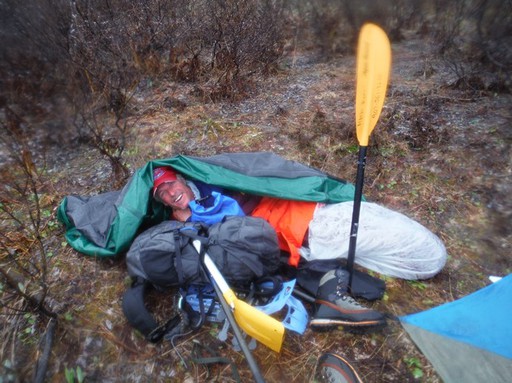 The best for me was not the TOP. I liked the slow transmission from the beach, forests, tundra, lower glaciers up into the alpine region and back. For me it is the right way to climb a mountain, starting at the ocean. It comforts my soul. It was a honor bringing the remains (ashes) of my friend Daniel and Karl (Ron’s sun) to the top. – But the very best was to see my loved wife and children again after the TOP and to continue the expedition again, together as a family: 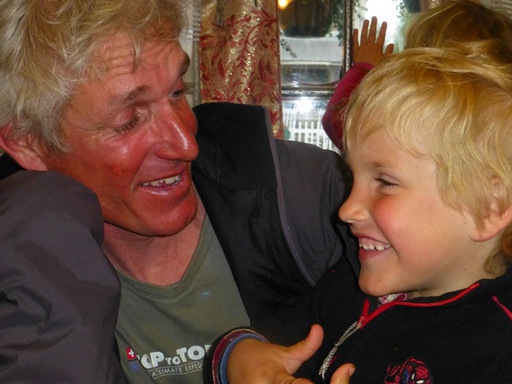 The scariest moments where when Martin nearly got hit by rock fall, Odin didn’t attached his sled and the sled torpedoed down the mountain for about 2000 feet; – luckily not ending in a crevasse and Dana unfortunately getting sever diarrhea. One rucksack with valuable equipment got probably stolen …let’s hope for a miracle. 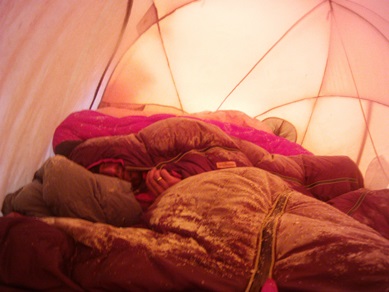 camp before the summit – all in one 3-men-tent!
I believe we were successfull thanks to the good team, equipment and friends. Many thanks to all the people supporting us, specially: Willie and Ellie Prittie, Chuck Homestead, Paul Roderick, Rayna Swanson and David Wigglesworth, Brian Okonek, Werner Rauchenstein, Ron Anderson, Higman Bretwood, Mark Cohen. 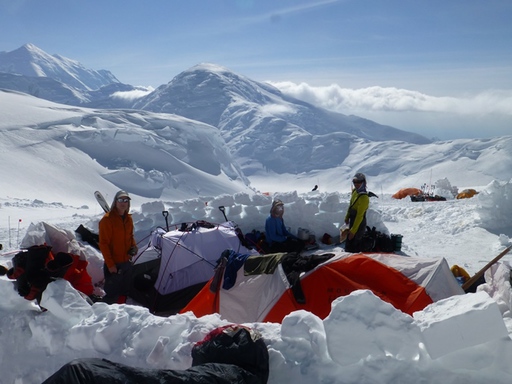 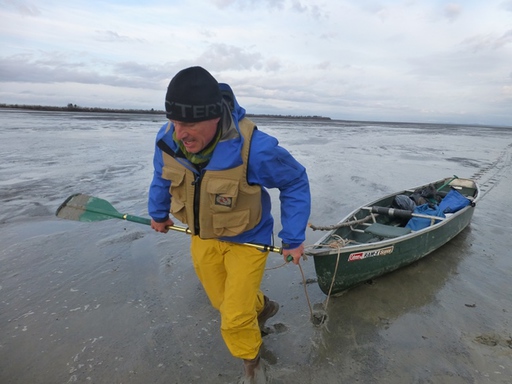 Back on the sailboat Pachamama, Sabine,Peter and I climbed Mount Mc Kinley Peak near Cordova. Sabine kayaked with me the first leg from the sea towards the peak earlier this year against a storm. We were happy to climb another Mount Mc Kinley from Sea to the TOP and back together :-). 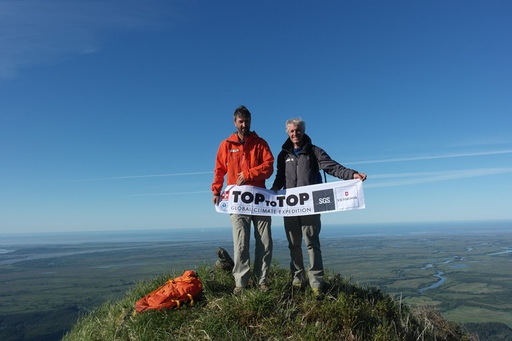 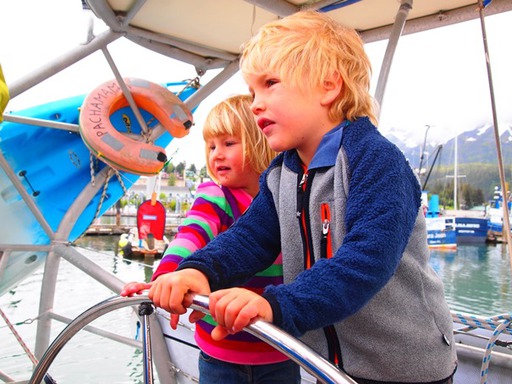 We are now back on the expedition boat Pachamama and continue to clean up the world and to inspire more young people to protect the planet; – collecting top-examples for the environment and act on the way to the next TOP. 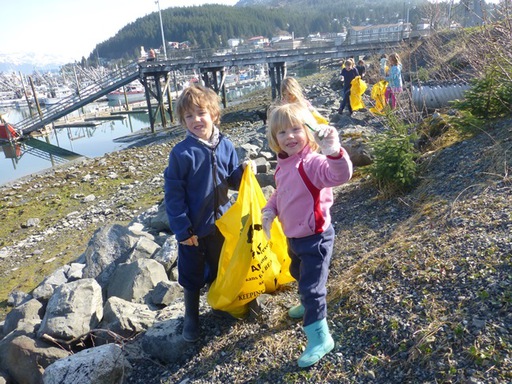 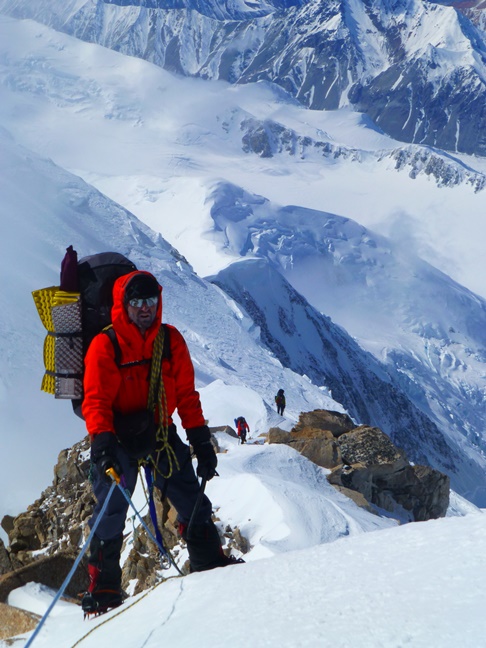 Peter on the West Buttress
It was not an easy decision for me whether or not to join the TopToTop expedition team climbing Denali. On the one hand it was a great, exceptional opportunity for me to do something really demanding and adventurous. On the other hand I was not sure whether I could meet the high demands posed by the highest mountain in North America and how to deal with the extreme weather conditions I would probably experience up there. I felt that I would decide against a climb if I were to read and think in detail about the risks and dangers of such an endeavor. So I let my heart decide and it simply said “go for it”.
In retrospect it was the right decision. I didn’t reach the summit, as the conditions were tough on the only possible day to go up to the very top of Denali – and this time I let my brain decide, and it came to the clear conclusion that it was too risky and demanding for me under the given conditions. But the two weeks on the mountain were very rewarding for me despite not summiting. I learnt that my fitness, which has seen better days, was still good enough for the long ascent and the heavy loads of equipment I had to carry up the mountain and my health was able to deal pretty well with the stress due to acclimatizing to high altitudes. Another experience was that the cold was less of a problem than what I expected. The excellent material from Arc’Teryx certainly helped a lot, and the group as well: four people in a tent designed for three kept as pretty warm during the coldest night at 17,200 feet while heavy winds made the snow walls around our tent collapse…. And, last but not least, the constant support by all the team members helped me a lot to overcome minor problems so that I felt free in my mind to enjoy again and again the great wilderness of the Denali area.
Personal report from Martin: Climbing to the TOP 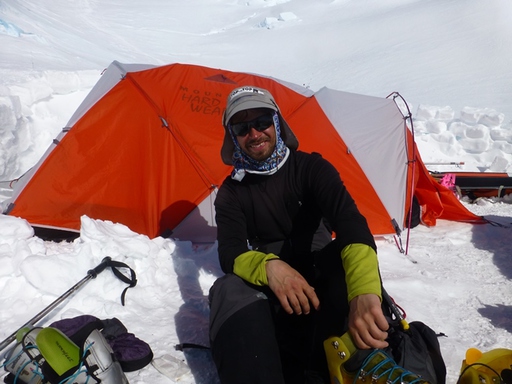 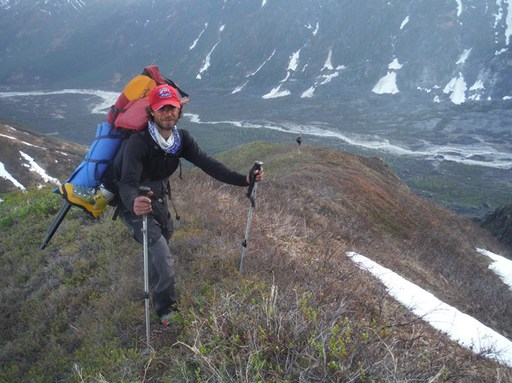 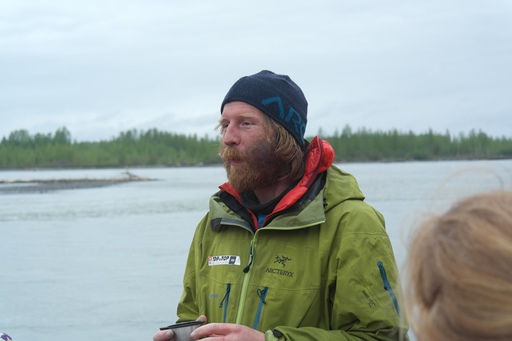 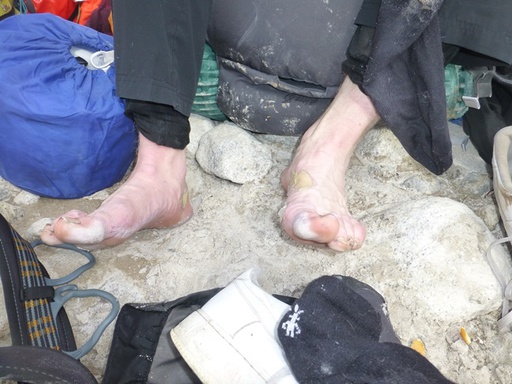 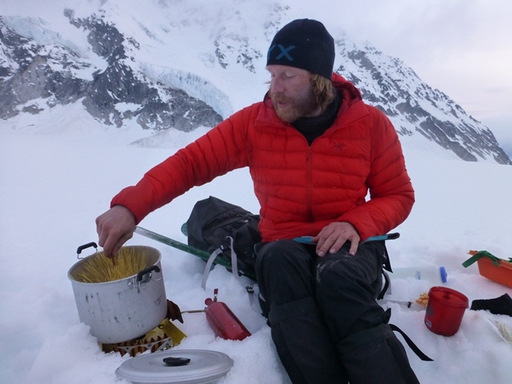 Odin cooking on Pika Glacier
Personal report from Dana:
When Dario asked me to join the Top to Top Denali expedition last fall it didn’t take me long to agree. I had played around Denali in the past but never attempted the climb, although it was something I had certainly thought about. Although I didn’t know any of the other team members I feel like we quickly morphed into a well organized team. And that is the message I came away with on this climb: the power of teamwork.
The climb was going well for me for the first week but then at our 14,000 foot camp I was stricken with severe diarrhea which really incapacitated me. The others and I realized that there was no way I would recoup at this altitude. The only thing I could do was go down to base camp and fly out. My fear was that I had compromised the entire expedition and the others would have to give it up to take care of me. This is where the teamwork kicked in. Martin and Odin volunteered to accompany me down, hauling all my gear. I was so struck by their willingness to descend all that way to get me out and then turn around and climb right back up to the 14,000 foot camp. It was an incredible gesture on their part. While they got me down to base camp, Dario and Peter were able to establish a high camp so the team would have a shot at the summit.
It’s seeing this teamwork and unselfish willingness to help that made this climb an incredible experience for me. 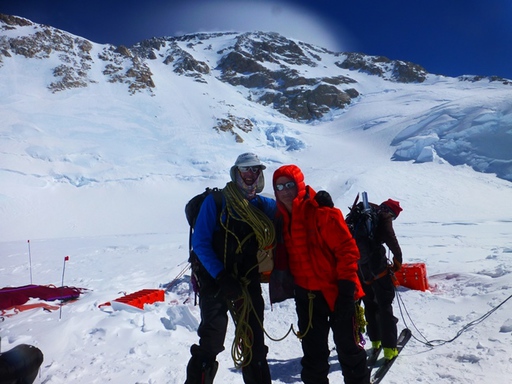