Have you ever thought how the wind might influence glaciers?
In Juneau we had the pleasure of meeting mountain guide and environmental researcher, Jamie Pierce. He saw Pachamama sailing past his house and e-mailed Dario to introduce himself. He has studied weather, snow and ice in the US, Antarctica and Europe, as it pertains to snow and avalanche research, guiding and education. Jamie’s interest in this field, like Dario’s, was spurred by his concern at how quickly the glaciers he knew were retreating. He invited us to participate in a data retrieval and maintenance mission near Juneau. With a difference: we would be helicoptering in to his station at Camp 17 above Juneau.
We met at the Era Helicopters helibase. Era aids in support of his research project by offering Jamie transport in between a very busy tourist schedule. After a safety briefing, we were on board with pilot Jiri Hanis climbing the 4500 ft in five minutes to a Juneau Icefield Research Program Camp 17 between the Cairn and Vesper Peaks on the Lemon Creek Glacier. This is the site of one of a long-term Mass Balance Glacier study. In the 61 years of study, the ice thickness has decreased 30 m (about 90 ft.) – similar to other glaciers studied in the US.
Jamie is interested in how the snow and ice grains form and the potential for avalanches. He measures how the wind force influences the buried snow thus affecting shape and density of snow grains and the potential for weakening at or near buried layer interfaces. This in turn might create conditions for avalanches- so critical in Juneau particularly because the capital of the State of Alaska lies at the foot of the valley below.
He was also interested in retrieving dataloggers that were measuring the pressure pulses at the base of Lake Linda. The lake, which ultimately drains through supraglacial channels into Lemon Creek at the base of the glacier. The old monitoring equipment was presumed lost under the ice but Jamie suspected that enough snow might have melted this season to expose the old station and allow retrieval of the critical data.
Measuring wind in these conditions is not easy. He has already lost sensors to the ice and… to high winds. His last sensor was rated at 150 mph…and broke. His new ones are rated to 200 mph and contain special materials to limit the impact of ice. All his information is stored at the station and simultaneously transmitted via satellite to his base. All power is provided by a solar panel. 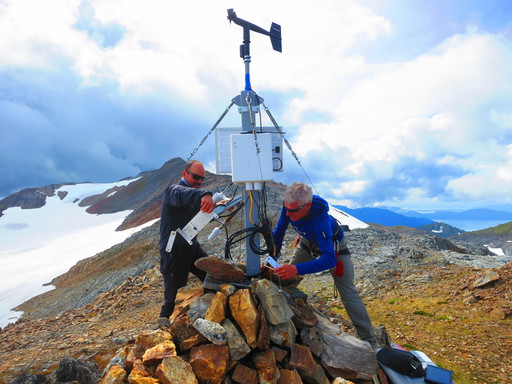 We helped Jamie rearrange his equipment and then Dario and him headed off across the glacier towards the remains of Lake Linda to see whether they could find the old weather station. An hour later they returned triumphant: they’d managed to collect two data loggers, one still collecting data. As they climbed the hill, Jiri returned to collect us. Perfect timing. And none too soon for Jamie who was anxious to access this data to see what secrets it might hold. For him, it was better than treasure; a view of the world beneath the ice that influences so much of what happens above and beyond it. 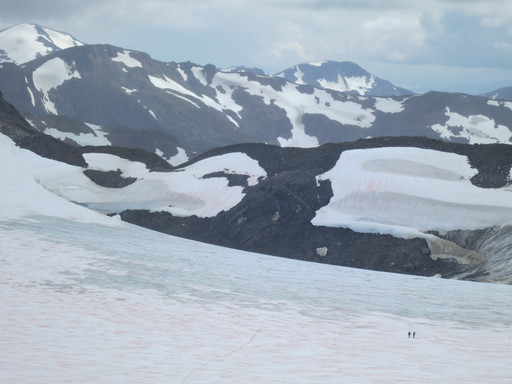 Jamie and Dario cut lonely figures on their hike across the Lemon Creek Glacier towards the now-drained Lake Linda.
The pink tinge to the snow is caused by an algae that grows in the warmer summer weather

Back at base we discussed glacier formations and how these might be changing. We talked about the particularly worrying phenomenon of Jökulhlaup– an Icelandic name for a glacial dam burst. With warmer temperatures, the rate of water accumulation within sub-surface dams in the glacier is increasing. When there’s too much water, this dam can erupt, causing a rapid release of water. On the Mendenhall Glacier above Juneau, for instance, the normal water discharge into Mendenhall River averages 2’400 cubic feet per second (cfs). During a Jökulhlaup, this rate can increase nearly ten times to 20’000 cfps, a tidal wave of sorts for those below. This type event is happening annually since 2011, far too regularly for the likes of Jamie and Dario. We hope that the unusual Top-to-Top mission to the Lemon Creek Glacier helps a little in improving our understanding of these events.

Our thanks go to Jamie Pierce of the University of Alaska South East and Era Helicopters for making this mission possible and for our opportunity to learn more about these fascinating phenomena.
More pictures here!