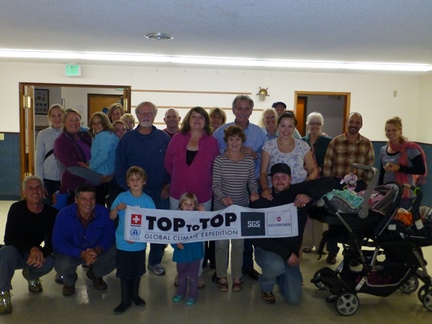 On the 6th of August we arrived in the capital of Alaska. We stayed with Bill and Marjorie in their beautiful house. Their hospitality was outstanding and we had time to recover and plan our next steps. Our friends Fred and Cinda joined us rock-climbing and fishing. The kids were excited to catch huge salmons at the creek close to Bill and Marjorie’s home. We had also the opportunity to make friends with Jamie and Adrienne’s family.
In the main newspaper we were on the front page. Before we left we did a public presentation at the yacht club where we got a computer donated to replace our damaged course computer.
On the 14th of August, after repacking, we were sent off by the Schwoerer’s very kind host, Marjorie and Bill, with a bag of bagels from the Silverbow Bakery (the oldest in Juneau).

We decided to make the most of the clear weather and head north and then inland along the Tracy Arm (a fjord carved by the Sawyer and South Sawyer Glaciers). The valley walls narrowed, icebergs dotted the water and as is so common in Alaska, waterfalls fed by melting ice cascade down to the sea. These are wild places where it is quite possible that no-one has ever walked.
Having passed one massive cruise ship that seemed to take up the whole channel we turned the last corner and saw the South Sawyer Glacier face. The water was covered with icebergs of all size and we had to move slowly and carefully to make our way forward, as if in a moving maze. Every so often, we’d hear the solid clunk of ice hitting the aluminium shell and worried glances were exchanged. If the ice is sharp, it can cut the hull like a can opener.
Pictures don’t reflect the size of the glacier. We must have been over 300m away because by the time we heared the irregular thunder of a sheet of ice shearing off into the water, the ice had already hit the water. The power and size of these moving jagged carpets is daunting. We watched from a distance, nervous of the moving icebergs and the risk of a wave caused by the falling ice- it would make us as vulnerable as an ant in a shaken glass of iced-water.
We turned with the tide to go back down the arm. With that the weather closed in and the rain and fog returned. We’d been just in time to witness the Arm and the Glacier in reasonable sunshine. We returned to our anchorage of the previous evening and took the opportunity of a short break in the weather to take a walk on the nearby rocky beach before returning to the boat to have a birthday dinner of spaghetti for Noe.

On our way through the Inside Passage we spotted whales several times. Once, a mother and its calf swam with us for about half an hour. The calf’s playfulness was the cause of much amusement.
The next place we moored was Petersburg, a small town founded by the Norwegians, where we spent a night before making our way to Ketchikan. After getting fuel and water, we set off again to a nearby bay to anchor for the night. We had to be very careful as we shared the channel not only with other boats but also landing seaplanes.
On August 20, we entered Canadian waters and cleared-in in Prince Rupert. After being inspected by two very nice officers we were granted access. Yupeee, we’re in Canada! We’ll see how long for…
Leaving Prince Rupert in the morning fog on the 21st, we initially set sail for the Inside Passage towards Vancouver but as the day progressed and the wind picked up, we set sail west for the Queen Charlotte Islands. After an overnight passage, we arrived at Hot Spring Island, where we expected to relax in the waters of the natural spring. 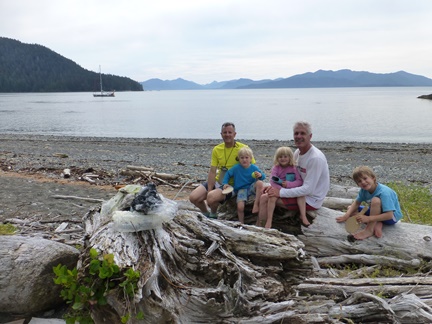 Unfortunately, two years ago a 7.8-scale earthquake blocked the springs and all that were left were two small puddles. So much for our relaxation. Instead, we passed a pleasant few hours walking around and across the island through the improbably high treed-forest. We did a small clean up of plastic and glass we found along the shore but left this with the Watchman because Environment Canada (who manage the southern Queen Charlotte Islands as a large park) ask that you remove nothing, including what may pass as litter from the islands.
That afternoon, we weighed anchor and set sail again for the inside passage. By nightfall we had made the northern tip of Vancouver Island and sailed between the busy channel between Hope Island and the main island. Thousands of gulls circled around the boat in the dark, calling eerily in the gloom. As day broke, we turned south east and headed for Cormorant Island, where we’d heard of an excellent museum on First Nations history. 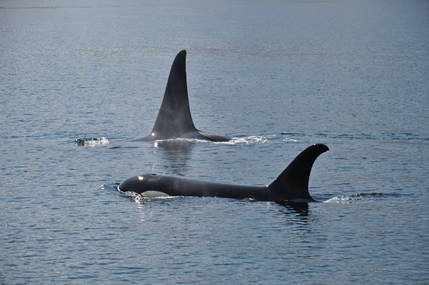 We anchored in Alert Bay south of the island and rowed ashore. After a couple of hours admiring the exhibit and looking at the impressive totem poles, we headed south again. We were called over the radio by a boat we met in Alert Bay earlier. They told us that Orcas had been spotted 5 miles behind us. As the conditions were against us, we decided to continue. Not five minutes later, we were fortunate to spot a pod all to ourselves. The kids were beside themselves as the Orca pod turned and next surfaced right next to Pachamama, a special birthday present for Noe, before heading for land.
The wind picked up the in the afternoon and we were forced to take shelter in a small cove. The anchorage was not perfect and we took turns to get up in the night and check on the security of our arrangement.
The next morning, the children put on an impromptu recorder concert for Dario&Sabine’s wedding day, championed by Salina and Andri joined by Noe with his own new birthday reorder. We then took advantage of the northernly winds for some good saling. As evening approached we sailed for Attwood Bay. We passed through three sets of rapids which bucked and twisted Pachamana as all the crew kept watch for rocks and eddies. We were relieved to make it through unscathed. We passed through an imposing channel which looked like a mountain had been sliced in two to make a pass for us and into the still of Attwood Bay, a pretty anchorage beneath. The water was clear and warm (or warmer than we had been used to) and we dived in for the first evening swim since Alaska. 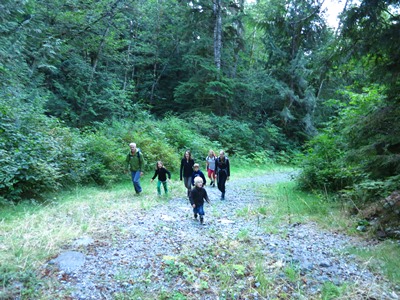 The dawn of the 26th was warm and still and we took off walking up a logging road to retrace Dario’s steps of 18 years earlier (1996). He wanted to show the family the place of an encounter he’d had with a Grizzly Bear. It had been one of the most frightening experiences of his life and he wanted to see the place in the light of day again.
Unfortunately, although the walk and views were fine, we were not able to reach the place in time. It was good to stretch our legs again but the winds and tides called and we were back on board heading south towards Desolation Sound by 11:00. The mountains rose from the still morning waters, opening up as the day progressed. As evening settled we took shelter in a small cove… along with many mosquitoes. It was an uncomfortable night and we were happy to sail for Comox in the morning, rounding Hornby Island and heading north up the channel for the Comox Valley. We needed to drop Meret so that she could connect with a flight for Switzerland to start school again. Unfortunately the buses and ferries were not in our favour and we had to make for Vancouver at nightfall. 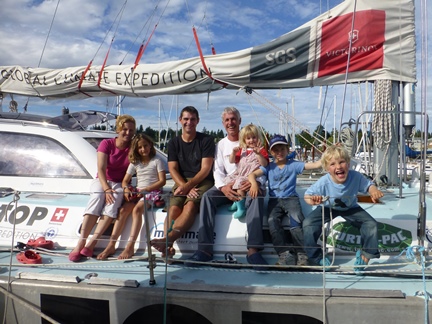 But not before catching up with Cliff Umpleby, one of the first Top-to-Top expedition participants on Mont Blanc in 2000. He is now settled and married with children in Comox. Dario and him managed a few hours swapping stories and news before we were off.
An overnight sail saw us arriving in Vancouver Bay around dawn. We inched through tanker and container ships towards our anchorage in the heart of Vancouver city. What a change for the quiet and privacy of our anchorages over the last few months. Now the view was of skyscrapers, water taxis and promenades. It would be our opportunity to restock and replan before the winds were again favorable on Sunday.