On Monday we made it over the Tioga Pass road and into Lee Vining. The Tioga Pass was constructed in 1883 and 1910 and at 9945 feet is the highest car pass in California, and higher than any in Europe. The original wagon pass was brought by the director of the national park service in 1915, which he then donated to the Yosemite National Park. It is now celebrated as one of the most scenic mountain roads in the USA and is commemorated as a civil engineering masterpiece. 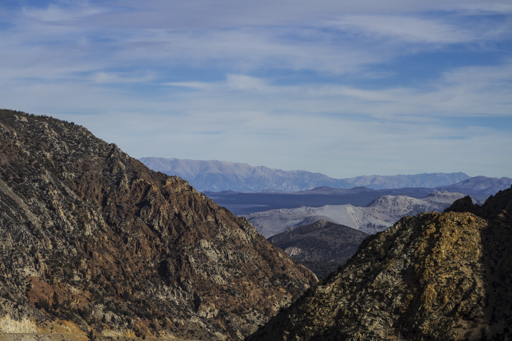 The scenery really was spectacular and as we turned the final bend Mono Lake came into view. The water a deep blue with salt lakes a stark white in contrast. The water level, as expected, was low, but there was still water in the lake, which we would later learn is due to an amazing fight for the lakes survival by the Mono Lake committee. 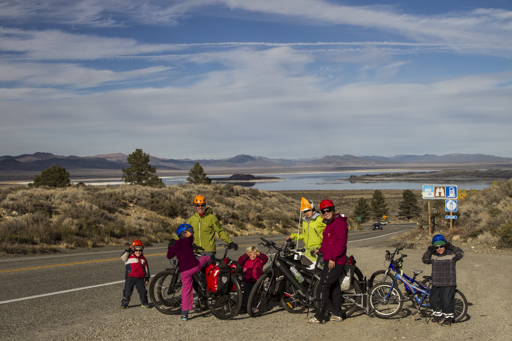 Having travelled 60km we found a small fishing camp to pitch our tents, right next to one of the streams feeding Mono Lake. We ate quickly and were all in bed by 7.30, due to the temperature dropping sharply as soon as the sun set. We rose at 7.30 the next morning and were greeted to ice on the outside of our tents and our saddles encrusted with a thin film of ice also. A very cold night indeed.
We set out soon after and headed to the Mono Lake Committee Information Centre and Bookstore. It was here that we learned more about the plight of Mono Lake and the inspiring lengths the committee have gone to, to preserve the lake and the habitat for so many of the animals which live there. 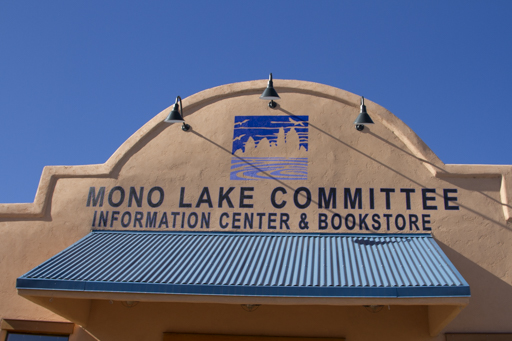 The below is lifted from the Mono Lake Committee Field Guide Series handbook and explains a little more of the lakes history in detail;
In 1941 the LA department of Water and Power (DWP) began excessive water diversions from Mono Basin Streams. During this Mono Lake dropped 45 feet, lost half it’s volume and doubled in salinity.
The Mono Lake Committee was founded in 1978 in response to the treat of inevitable collapse of the mono basin ecosystem. In 1994, after over a decade of litigation, the California Water Resources Control Board ordered DWP to allow mono Lake to rise to a healthy level of 6392 ft above sea level – twenty feet above Mono Lakes historic low. DWP has reduced its Mono Basic water exports by over 80%, and Mono Lake is now on the rise!
Over the last 15 years, with the help from the Mono Lake Committee, LA has become one of the most water conscious cities in the united states, conserving more then enough water to share with Mono lake. Today, the committee continue to work to restore and protect Mono lake and educate new generations on the importance of this area. 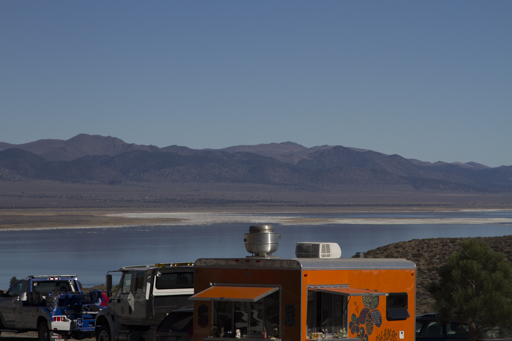 From Mono Lake we headed down the 395 highway towards Mammoth, stopping only at June Lakes for fuel and air for the tires. 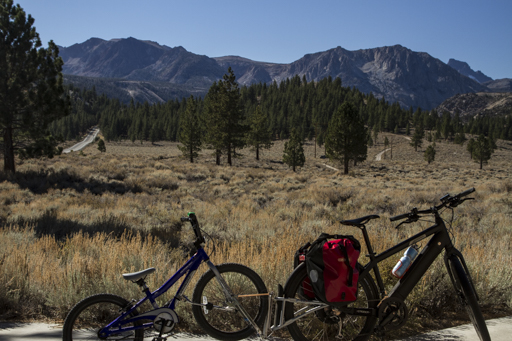 We then took the scenic road down to mammoth lakes where we had meetings with the main Elementary, middle and High Schools ahead of hopefully doing talks and presentations this week.
We were also very fortunate to have had spare batteries and parts for the bikes delivered to Mammoth Outdoor Sports, from Stromer, where the shop were very kind enough to fit Salinas bike with a new front brake, as this had unfortunately broken whilst we were in Yosemite.
Thank you so much to Chop and Luke for your generosity in helping us fix the bikes. It really is very kind and very much appreciated.