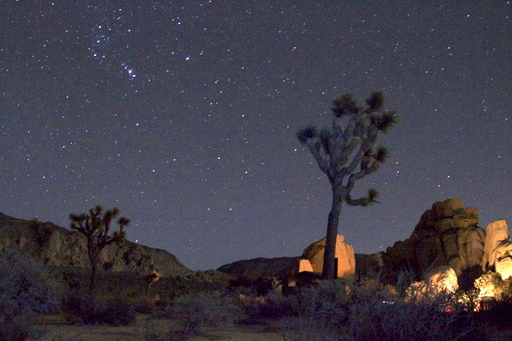 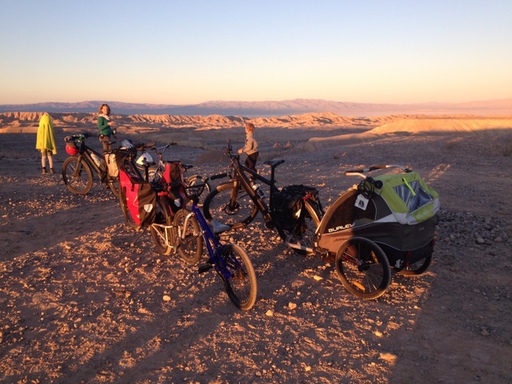 more pics here! by Stephan and Ron: «Due to the Californian drought, this cafe will no longer serve water unless requested» Is this one of the positive examples, the Top to Top Climate Expedition is looking for? Yes and no: Of course, the statement in a cafe in Joshua tree will attract people’s attention. Nevertheless we might call it “Pflaeschterli Politik” (politics by band aides) in Swiss-German. Sabine and Dario are searching for real solutions. In Borrego Springs, a town a few miles further down but still in the Californian desert, 70% of the water is used by the agriculture, 20% for golf courses and 10 % for residential purposes. Of the 10%, 7% is used for the garden and only 3% in the households. Water consumption is THE big issue in California: Who is allowed to use how much water where? We come across the topic every now and then. For instance, we crossed the Colorado River Aqueduct that takes water from the Colorado River and ships it as far as L.A. Or when we headed for the Salton Sea, a huge lake that was filled by an episodic flood coming from the Colorado River in 1904. The water got saltier since then because of evaporation. It is being poisoned by runoff from fertilizers and pesticides from agriculture. We were told about a farmer who grows almonds and pistachios – and tomatoes if the market allows it. His annual bill for water is about 1.5 million dollars. No wonder, since it takes 6 gallons of water to grow one tomato… 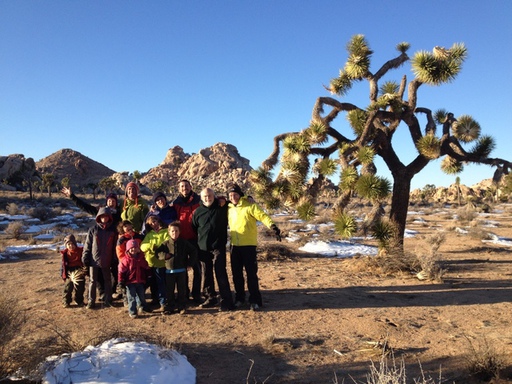 Ron Andersen from Alaska and Stefan Baumann from Switzerland met the family at December 27th late night 15 miles south of Joshua Tree at the camp ground Hidden Valley, a rather simple but marvelous camping site with no showers and no running water. 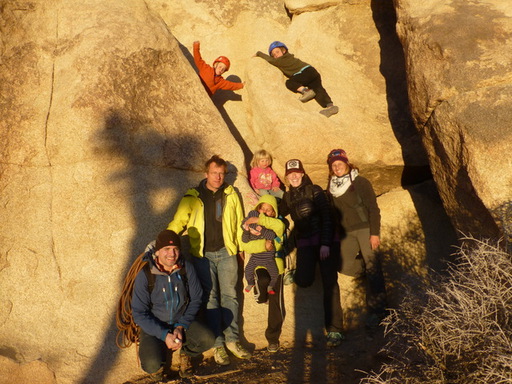 The family wanted to spend a calm Christmas time on their own, but as always along their route, they met a lot of new and old friends: – Carol, who made it possible to evacuate to the Lutheran Church in Joshua Tree village during a cold front – where we felt very comfortable. Being back on the background, the kids built up a snowman with the two inches of snow that had fallen. – Melk and Simone from Switzerland on their way to San Francisco – from where they reported the bad news, that the windows of Pachamama were open. Salina was upset and wanted to return there immediately. – Frauke and Paul from the Netherlands, traveling since last August through Canada and the US on their bikes and always happy to play with the kids – as well as backgammon. – The mountain guides Stoian with Ekatherina from Bulgaria and Jamie with Adriana from Alaska with their families and Lynn Hill – once the top female climber – showed us a few new boulders nearby. 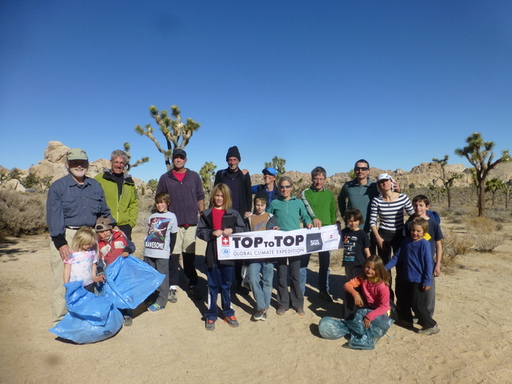 A lot of them participated in a Clean Up. – and we were astonished how little litter we found, mostly near the campsites themselves, a common finding in national parks. Might it be due to the fact that some Americans care about the nature also at other sites in the country? 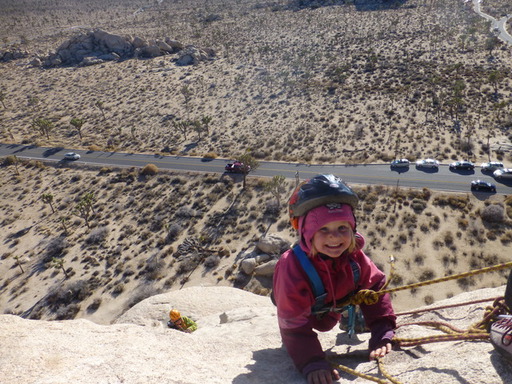 Joshua Tree and especially the region around Hidden Valley Campground, is renowned for its rock climbing. So the whole family and also most of the others there did a lot of it. 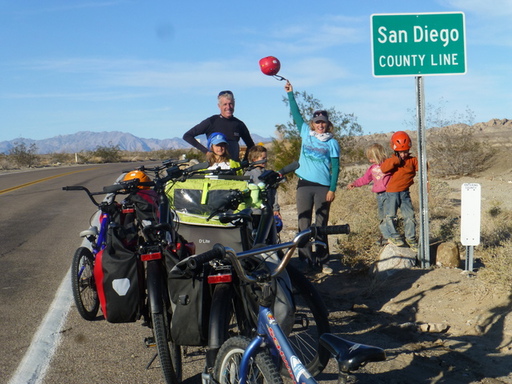 On January 5th, we left Hidden Valley for the Cottonwood campground on the west edge of Joshua tree. Leaving this campground the next morning, we had every long downhill ride through a beautiful canyon as we headed to Mecca and around the edge of Salton Sea to Salton City and then turned west to our next campsite where we watched the full moon rise like a ball of fire over the hills on the other side of the lake. The reflection on the lake was like a fiery curtain. That day the whole team cycled over 80 miles, which was only possible thanks to the electric bikes of Stromer. 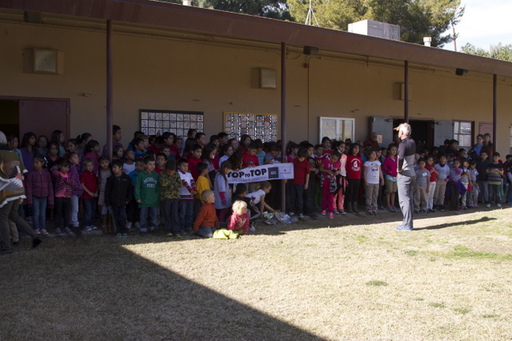 A good climb and then a downhill the next morning brought us to Borrega Springs, the first town in San Diego county, where we were able to make a one hour presentation to the students at the elementary school. The kids stayed the rest of the day as guests in classrooms and returned again this morning to spend another day with the students in the classrooms of Heidi Noyes and Polly Macuga. After the presentation, we met the fourth grade math teacher, Monica, who works half of the day and had a nice long conversation while we ate lunch as guests of the school. She helped us a lot by arranging an interview with the local paper and giving directions to a bike shop, the Chamber of Commerce. To top it off, she invited us to come to her partner, Troy, and her house to take very welcomed showers, have dinner, and pitch our tents in their yard. Early today we started the long climb over a pass through the mountains towards the coast and are now camping about 40 miles inland from the Ocean. After 2 months in the dessert we enjoyed the green grass, tress and already smell the Ocean. 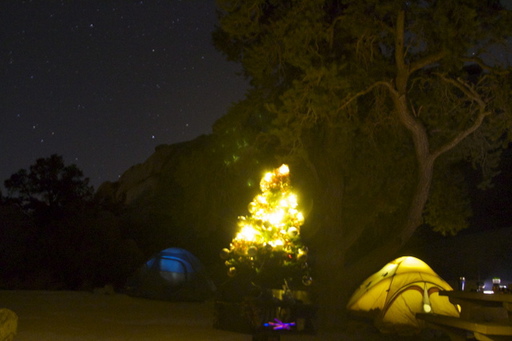 by Sabine: We arrived on the 17. of December in this wonderful Joshua Tree national Park. It was time to say goodbye to teacher Anina and filmmaker Jenny who coined us for 3 month. It has been a great time and we miss you! – Thanks so much. – Luckily Jenny will come back! – We met new friends John, Kim, Craig, Walter, Claudia to name a few. For me Joshua Tree looks like on another planet – astonishing! We had the most different Christmas, we ever had! I was trying to make it Christmassy, but for a typical Swiss, who is used to have an evergreen tree in the warm, cozy home in the sugar powdered snow mountains, I couldn’t. We were in the High-Desert, with Joshua Trees (we were not allowed to hang something on the trees, because of the rules in the National Park), living in a tent, with rocks and sand all around! The only thing what matched was the cold about minus 3 degrees Celsius at night, and we were prepared for Desert temperatures around 10 degrees Celsius. But suddenly I realized that Christmas is not about decoration, gifts and snow. It’s about to find peace. Here it was probably the most perfect place, we had no cell and internet coverage! So we started to have a good time making cookies on the grill. As I arrived at our campsite after a hike, we saw the invitation from Shelly, Shelly’s daughter Kye and her boyfriend Andy to celebrate Christmas with them. We met Shelly in Alaska, where she does an amazing job as a wale scientist. Thank you so much for giving us a home at Christmas. Back at the campground the kids did a Xmas play and invited all the climbers. So we had a wonderful Christmas. Thanks to Carol and Dick we got an evergreen Christmas tree. 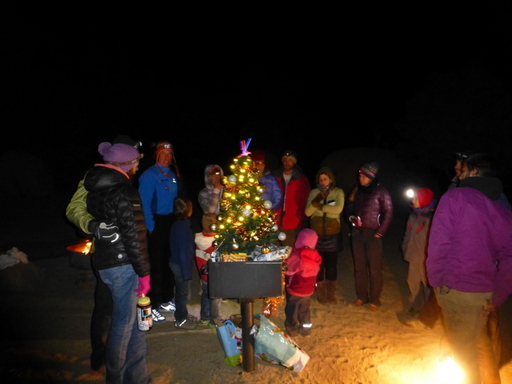 And last but not least: 5 days later it snowed! 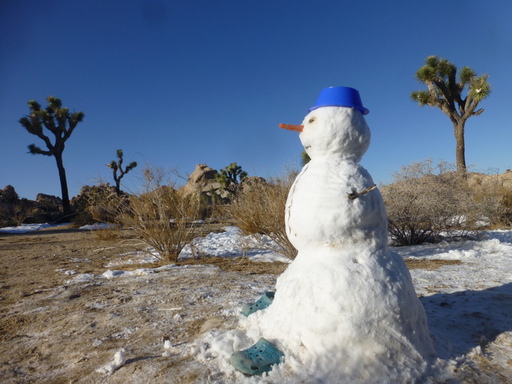