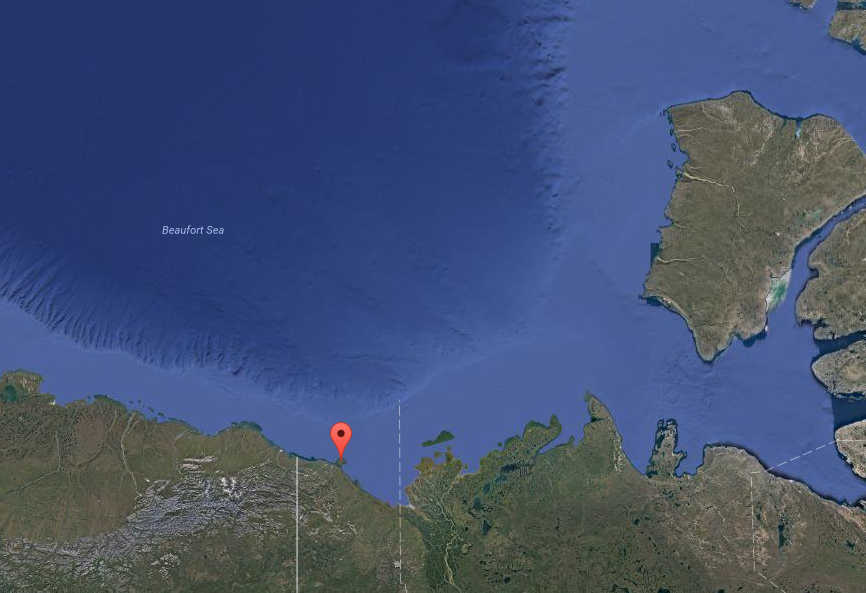 Meret reports:
First of all, an apology that our daily blog is late but so much happened in the past couple of days.
We sailed in towards Herschel Island from Barter Island in fog. As we got closer the fog lifted and we could see a green island with large cliffs that looked like rows of mud slides. We later learned that these were retrogressive thaw slumps, only we didn’t know their significance yet.

We anchored in the little cove and quickly got ready to paddle ashore to explore the buildings extending out onto the land slip that hugged the cove. To the children’s delight a dog came running to greet us the minute we stepped on land. He was followed by the parks biologist Cameron. He gave us a quick introduction to the island. Herschel island was the first territorial park in the Yukon, which means the park aims to protect both the cultural aspects and the wildlife within its boundaries. The park is on the list to become a UNESCO world heritage site. He explained there were two research teams and two park rangers in the camp. One research team from Germany, part of the Alfred-Wegner Institute for Polar and Marine Research (AWI), and the other from the University of Edinburgh.
Soon Cameron had organized a presentation by Professor Hugues Lantuit from the AWI. Hugues first visited Herschel in 2003 and has been there yearly during the summer since 2006. He began to tell us all about permafrost. 34% of the planets coasts are held together by permafrost. Herschel is frozen down to 600m below the earth’s surface, in Siberia it can be frozen down to 1.5km. The AWI looking at how the decrease in permafrost due to warmer temperatures is affecting coastal erosion. The average rate of coastal erosion is 0.5m per year. In Herschel it is 0.8m per year. The highest rates in the world mark loses of up to 30m per year and Herschel and the Yukon are one of the most affected areas. Herschel island has some of the largest retrogressive thaw slumps in the world. Retrogressive thaw slumps are these areas of large coastal erosion due to decline in permafrost caused by global warming. The samples from these slumps are taken using chains saws to cut into the still frozenlayers and analyze the composition of the layers. He tells us the thawed parts can be tricky to walk on and inexperienced people that step in the wrong place are sometimes stuck for up to an hour until they are dug out of this dense sediment.
One of the open questions is how this effects marine life and food chains in these areas. Not only the sediment from the coastal erosion ends up in the sea but with it micro-organisms. These can both have an effect on the local fish and from there on the whole food web. The sediment for example makes the water more turbid.

Hugues also explained how the island was formed. During the last ice age the glaciers extended until where Herschel lies. This was point was the end moraine of the glacier and all the sediment was pushed forward and up from under the ice, which raised what is the island today above the later sea level. This is why even today shells can be found on the hill tops.

After the presentation we go to go into the field and see how and where water samples were taken. On the way we stopped to look at the last standing ice cellar the whalers had used a hundred years ago. Apparently, to make them the whalers had used explosives to blow a hole into the frozen ground. The camps had used them until 2 years ago. They are little mounds of earth with a wooden door in them. After airing it out, we climbed through the door and and down an icy ladder. Down below we found ourselves in a room with ice crystals coating all the walls and the ceiling. The ice crystals were beautiful. This was a natural freezer and until the permafrost had started to thaw the ground causing the caves to collapse one by one, they had been made good use of.

Then we went on to study site. The water samples are being taken to analyze how the reduction in permafrost due to climate change is affecting the sediment flow in rivers and ultimately into the sea. Briefly summarized, there are two things that may be happening:
Firstly, there may be more and more sediment coming into the river due to it no longer being held together by the permafrost. This would cause the water to become more turbid.
Or, the water is getting clearer. This would be because, even though there is a thicker layer of earth at the surface no longer frozen, increased plant growth has been recorded. The roots of these larger plants may decrease the erosion by holding the sediment, which is no longer frozen, together. So in some sense replacing the permafrost’ she function. The water samples being taken twice daily by a machine in the river, they hope will give them a better idea of whether the water is changing and then maybe why or why not.