Expedition Report: Welcome back to the Atlantic

We made it out of the Hudson Strait into the Atlantic. “The door out” in the words of Victor’s advice:

Now we have completed our voyage to the East, we are in the Atlantic. In 2013 we left the Atlantic. We are currently in the Labrador Sea that is part of the Atlantic.
During the night we had a lot of wind from behind, we were moving along and quickly approaching the northern most point of Labrador. The fog was still with us and apart from the fulmars, with us as usual, we were alone. We knew we had to be careful due to strong tidal rips and more wind coming soon.
Then the fog cleared and we found ourselves in clear blue sky with very variable winds. The wind jumped between 10 and 30 knots. We had planned to join SY Caledonia at anchor near Cape Chidley. But they had over 30knots there and we had wind and current against us. So we sailed on instead. The whole day the wind jump up and fell back down, came from here then there. We have never used so many different sails so many times in one day this whole journey. It got a little annoying after a while, but if nothing else it was a work out. Though also a little nerve wreaking when there are reefs that should be avoided.
Ironically, what kept us going was the cause of death these messy winds: mountains. The landscape had completely changed from the barren flats expanses of tundra desert and rocky hills, to big beautiful snow covered mountains and valleys. Sometimes you don’t realize how much you missed something until you see it in front of you again. We were all so so happy to see mountains! If it had been possible, we would have gone and climbed one of them with its rigid glaciers straight away.
The strong sun warmed all of us and put a big smile on our faces. So it was decided school would be conducted in the cockpit for the first time since the North Pacific crossing. Christina and Salina instantly took to sunbathing during the break, while Noé ran to the bow and watched out for kelp. Instead, he saw a pink piece of styrofoam. The first piece of styrofoam in the Atlantic. We have started seeing marine debris again, not much but these have been the first sightings since Nome.
The night sky was clear and brought northern lights. They weren’t as strong as the once we had seen preciously but even Alegra and Noé got to enjoy them this time. Gofundme link:
https://www.gofundme.com/2gb7d6c
voyage link:
https://share.delorme.com/ChristinaHartmann 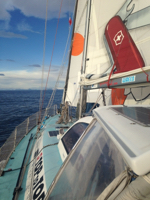