I woke up on the 16 th of October and we were just sailing in to Brooklyn .Suddenly, I remembered that l still had to put my presents out for Dad on the table. Birthday card and some sparkling water. Before opening the presents we ate breakfast. After all that we went to shore and met friends from friends. They drove us to a walk where we could get our energy off. After awhile we were at the place where they dropped us off. We played tag for some minutes until they came to get us again. They drove us to their house to have lunch and celebrate Dad’s birthday party.
Mia was so happy to see the cats and chase them around the living room. When she squealed, they ran for it!
We ate hamburgers and roasted potatoes, my favorite! Finally, it was time to eat cake and ice cream! (For us to eat ice cream was very unusual.) My Dad also had a hard treasure hunt where he had to tell us all of his birthdays until 48.
Later, Andri and I had a wrestle and of course I won! But we did a bet that in two years he would be stronger than me, but I do not believe that. In the evening, we sadly had to go back to the boat.

By Andri
I wanted to wrestle with Salina. And I promised Salina that I’m gonna win in 2 years. Today we saw deer poop. It was not warm. They ate some vegetables. We came in to eat cake. I wish it was my birthday. And it’s soon! It is on October 25 !!!!

By Alegra
We sailed to Liverpool. 😍😀😳😁😜😛
We ate ice cream.
We played with the cats

By Amanda
I joined the Schwoerer’s Saturday evening for the sail down here to Liverpool, Nova Scotia. We had a beautiful night, with the full, super moon, and gentle winds. I have never been seasick before, but then again, I have never sailed overnight…
So, after finishing a delicious supper we were given our night shift schedule; mine was to be midnight until 2am. I was both excited and nervous. For as far as they have travelled, I did not want to be the one to put them in danger!
Somewhere near Sambro, the combination of using the windowless “head” and the motion of the sea, left me feeling queazy. I ran for the deck, as they have never in 16 years, had anyone get sick inside, and ‘lost my guts’.
Feeling much better, I had a quick lesson on the navigation equipment before snuggling into my sleeping bag for my pre-shift nap.
I woke to calm waters and slow winds that pushed us along at around 3 knots. My shift was wonderfully uneventful, as Christina and Sabine hung up balloons and birthday signs for the party the next day.
I slept soundly that night, as the waves rocked me to sleep.

I awoke to an amazing sunrise and was relieved from my morning shift to take pictures. I even climbed the mast to get a better view! It was awesome! We moored in Brooklyn where we had breakfast on board, before packing up for the day’s adventures in Liverpool!
All ten of us: 5 kids, 2 parents, 2 teachers, and a PhD student, with our bags for the day, and a birthday cake, piled onto their dingy, and paddled to shore.
We met Dr. Tim Woodfort Last and his wife, Sharron, who dropped us off for a beautiful fall hike, before bringing us back to their home.
The kids were so excited to find out they had 2 rescue cats, one only a 4 month old kitten, and had so much fun playing with them all afternoon. Even Mia, squealed with delight every time they ran past.
It was a great day, making new friends and eating cake and ice cream! (A rare and exciting treat for the Schwoerer family.)
Exhausted from all the excitement of the day, we paddled back to our home on the sea. Before getting into bed, Salina played some of her favourite songs and Dario and Sabine danced around the cabin, while the kids laughed and played with the balloons.
I feel very fortunate to have met this wonderful, loving, ADVENTUROUS family, who didn’t think twice when inviting me along for the weekend.
And who knows, maybe I’ll see them again…! 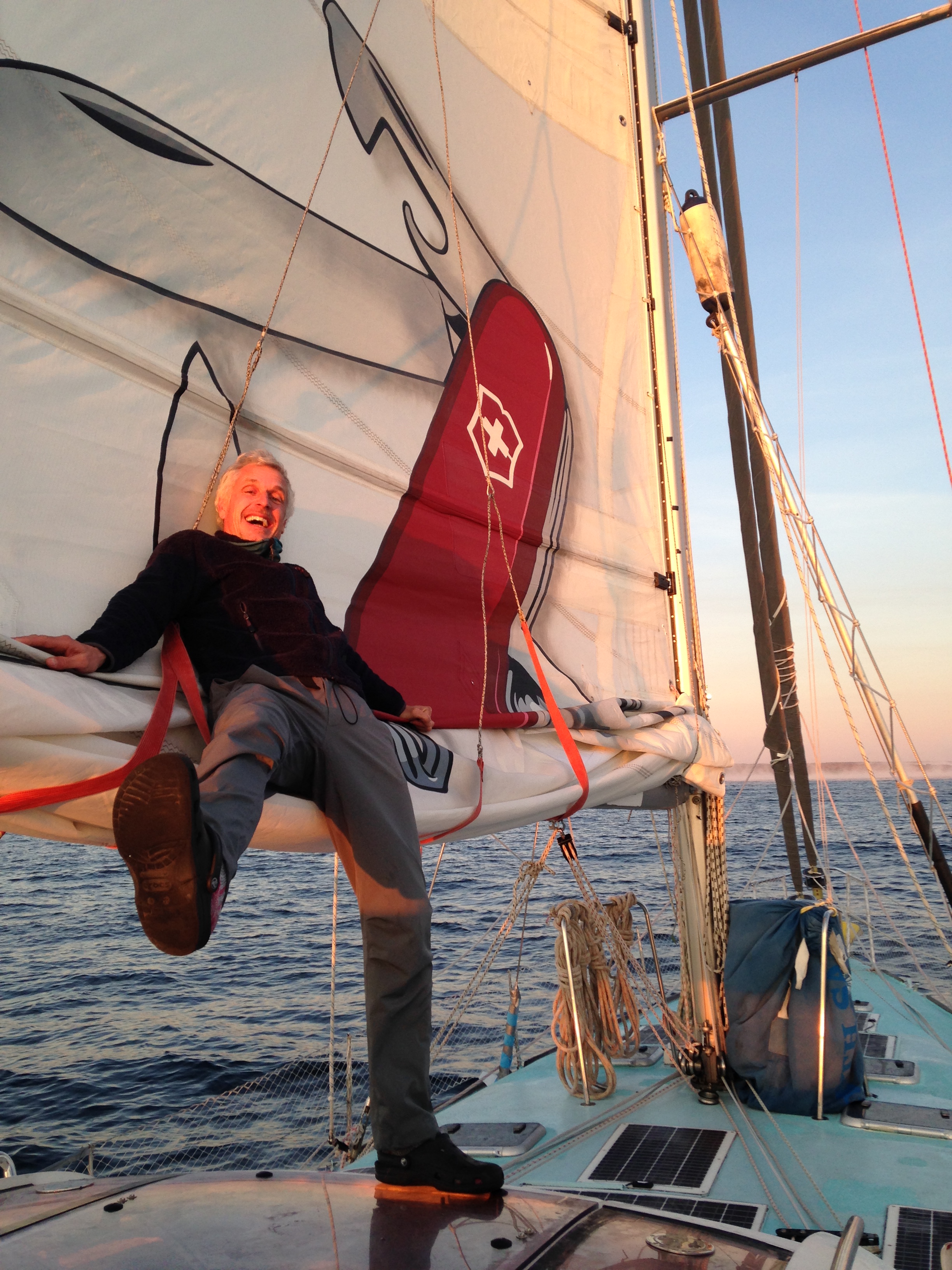 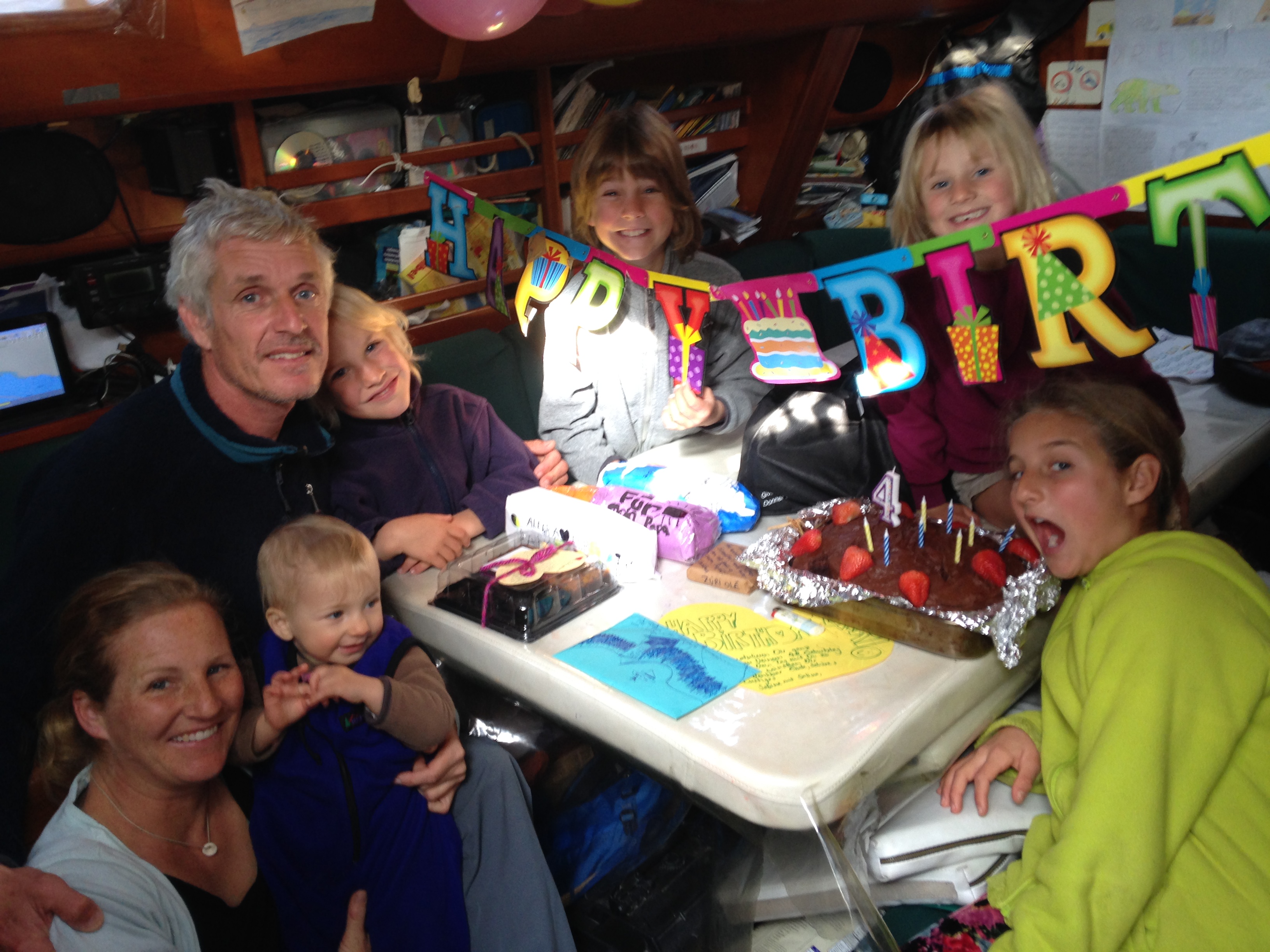