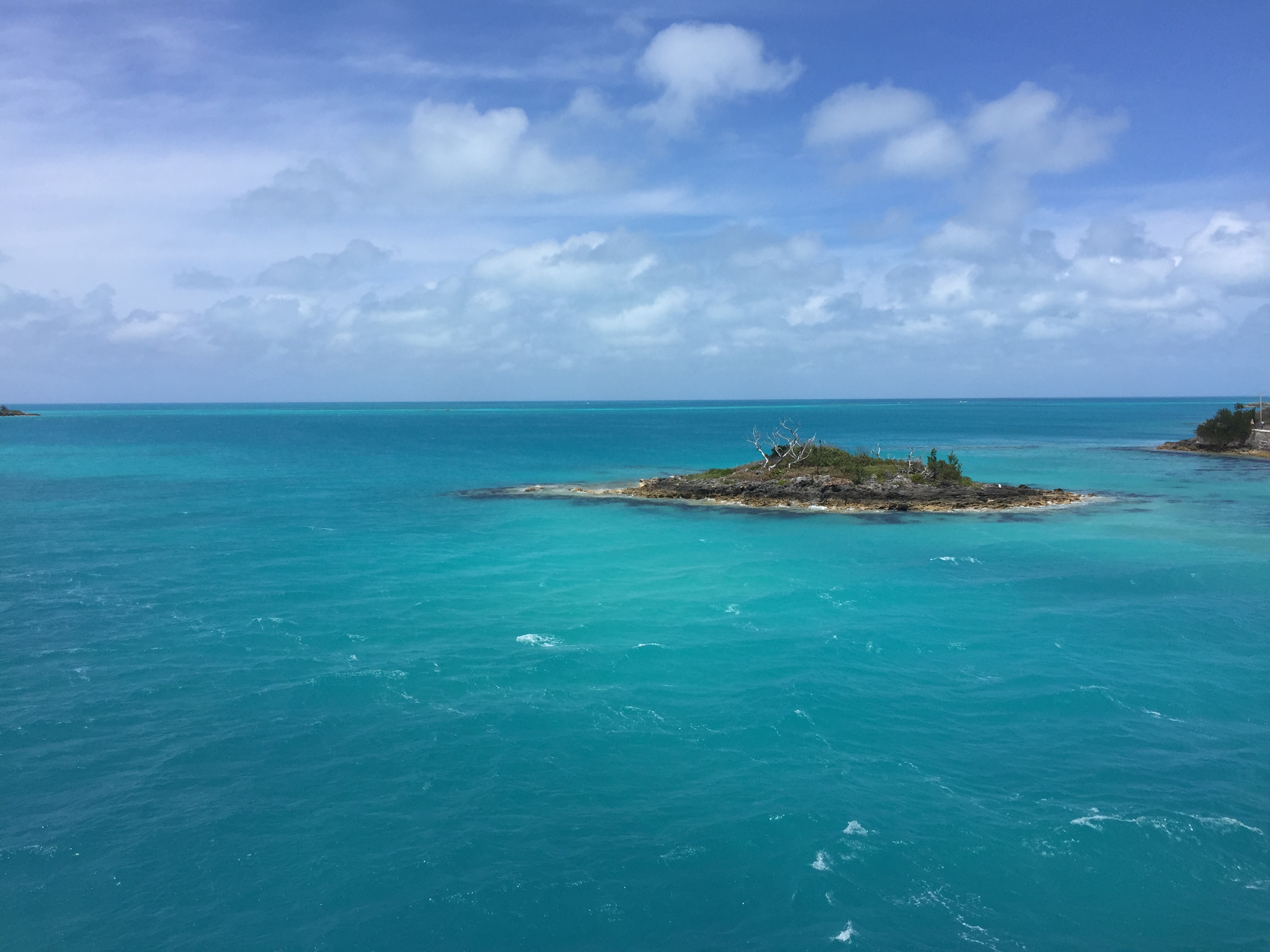 Follow us to Iceland and Greenland here! … and join us in June/July/August in Iceland and in Scoresby Sound at the East Coast of Greenland. 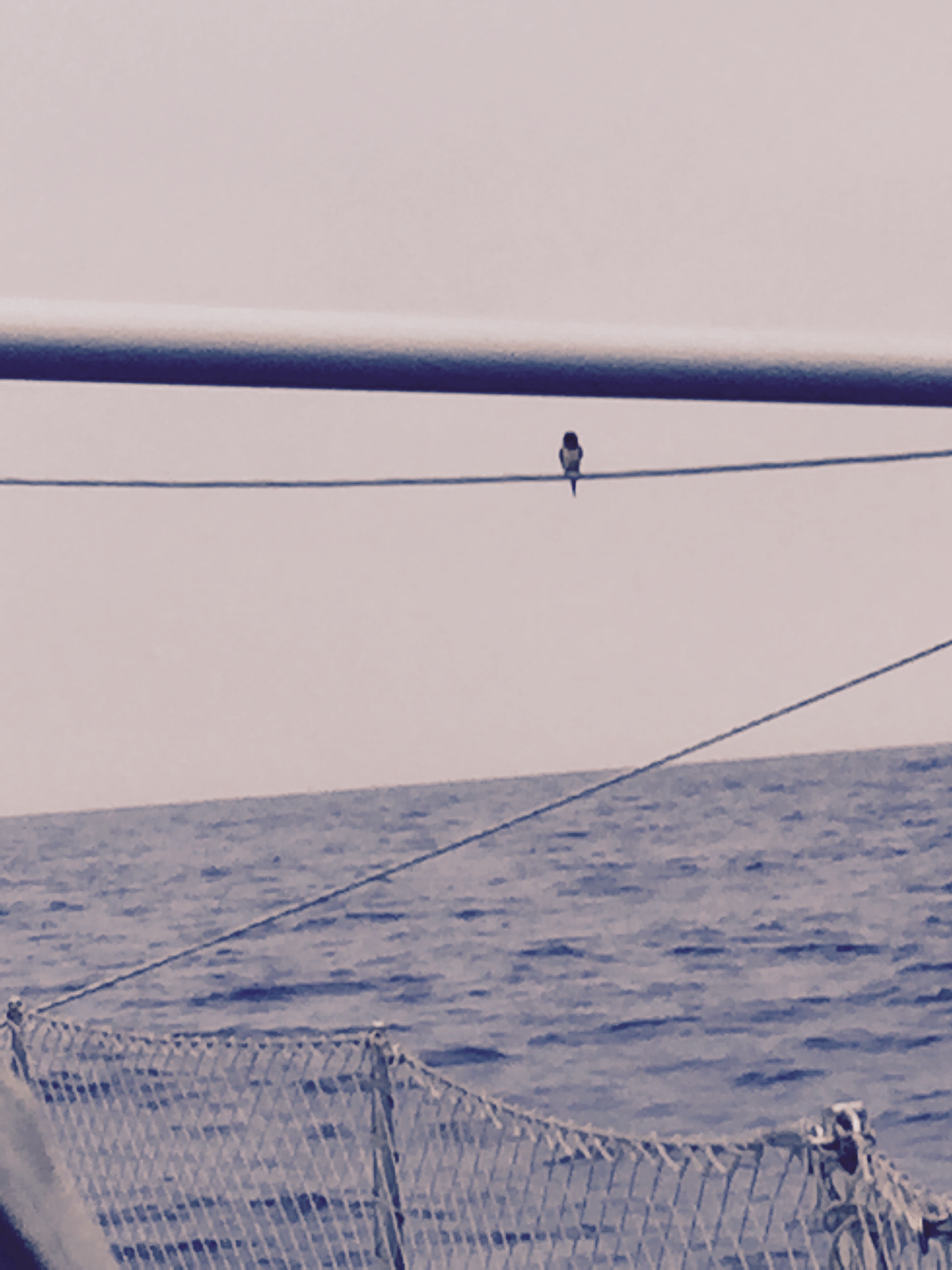 It took 6 days to sail to Bermuda from the Lower Bay of New York City. We crossed the Gulf Stream blowing approximately 45 knots giving us a full day with massive waves overtaking the bow and swimming all the way back to the cockpit. The water was 19 degrees celsius, and then slowly dropping back down to around 12 degrees signaling to us that we have completed crossing the Gulf Stream. I felt a sigh of relief when this happened because were we looking forward to clear skies and fair winds, and also the end of my sea sickness. At the same moment, a squad of singing dolphins approached the stern of the boat, dancing in our wake as we moved forward, almost assuring us we were still headed in the right direction of land. They kicked their dorsals in the air wishing us good luck for the rest of the journey to Bermuda. 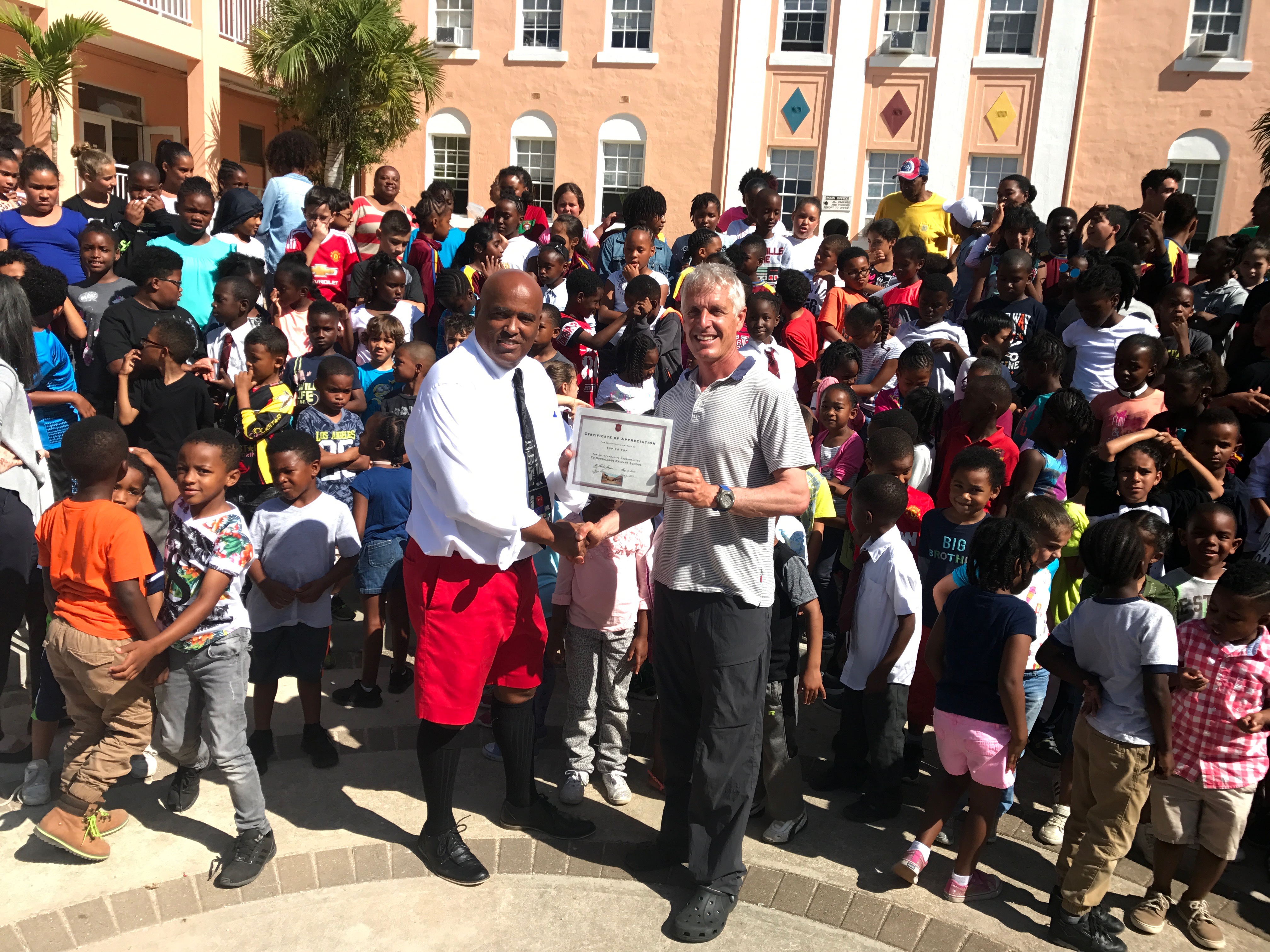 While meeting Charles Joynes, the principal of Northlands Primary School, he described to us the many pros and cons of moving to an island like Bermuda. For example, a little known fact that in Bermuda, residents are allowed only once vehicle per household, no matter how many people live there. With economical and political challenges very different than we face in the United States, Mr. Joynes and most other Bermudians face surcharges of taxed items up to two times the original retail price on clothing, food, and other imported goods like oil. This makes it increasingly difficult to survive in the islands and support a family with these economical pressures. People have some solutions that may help such as catching rain water, farming their own foods, and using public transport around the island. I found the bus and ferry system to be very convenient and probably the quickest way to travel from one town to another on the island without having to worry about parking. Luckily, the RBYC (Royal Bermuda Yacht Club) is placed in the center of Hamilton’s town, making it easy to walk most places. 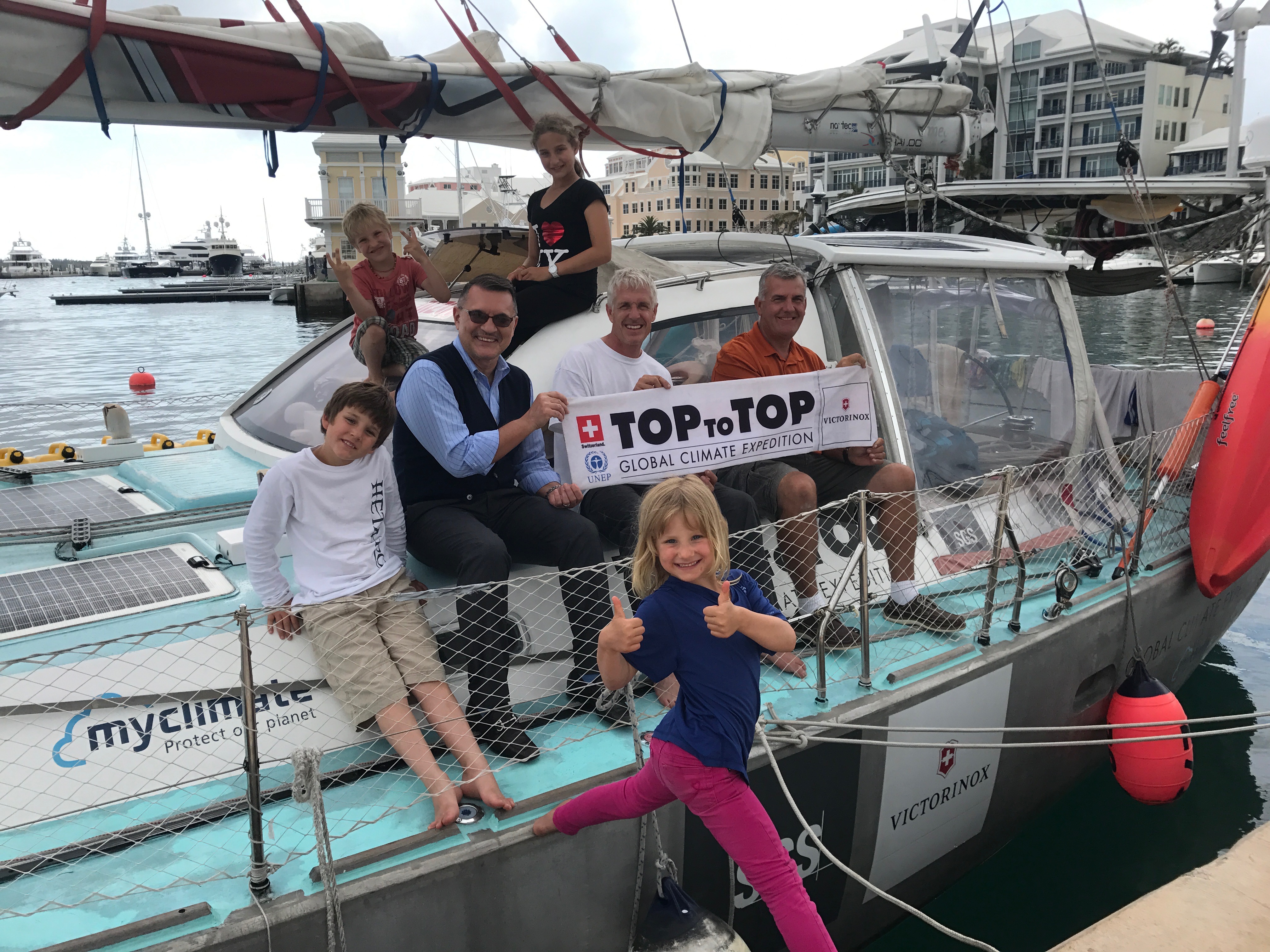 During the week we had 3 times students visiting the boat thanks to the courtesy dockage at Royal Bermuda Yacht Club: 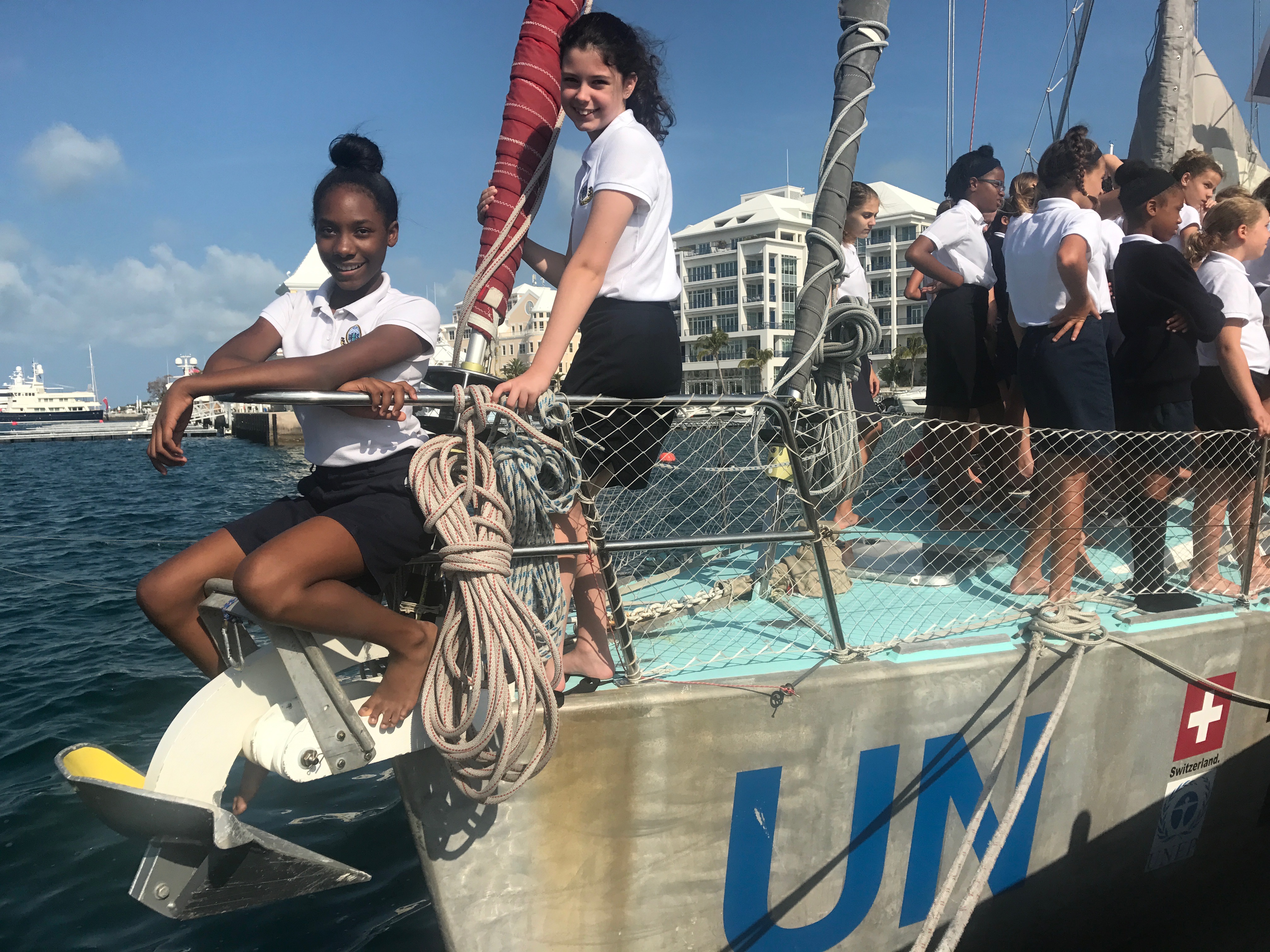 We maintained Pachamama and were able to talk to Danish Navy Captains Jens and Martin with Greenland experience:

We were featured in the article in the Royal Gazette that helped us to organize the events. 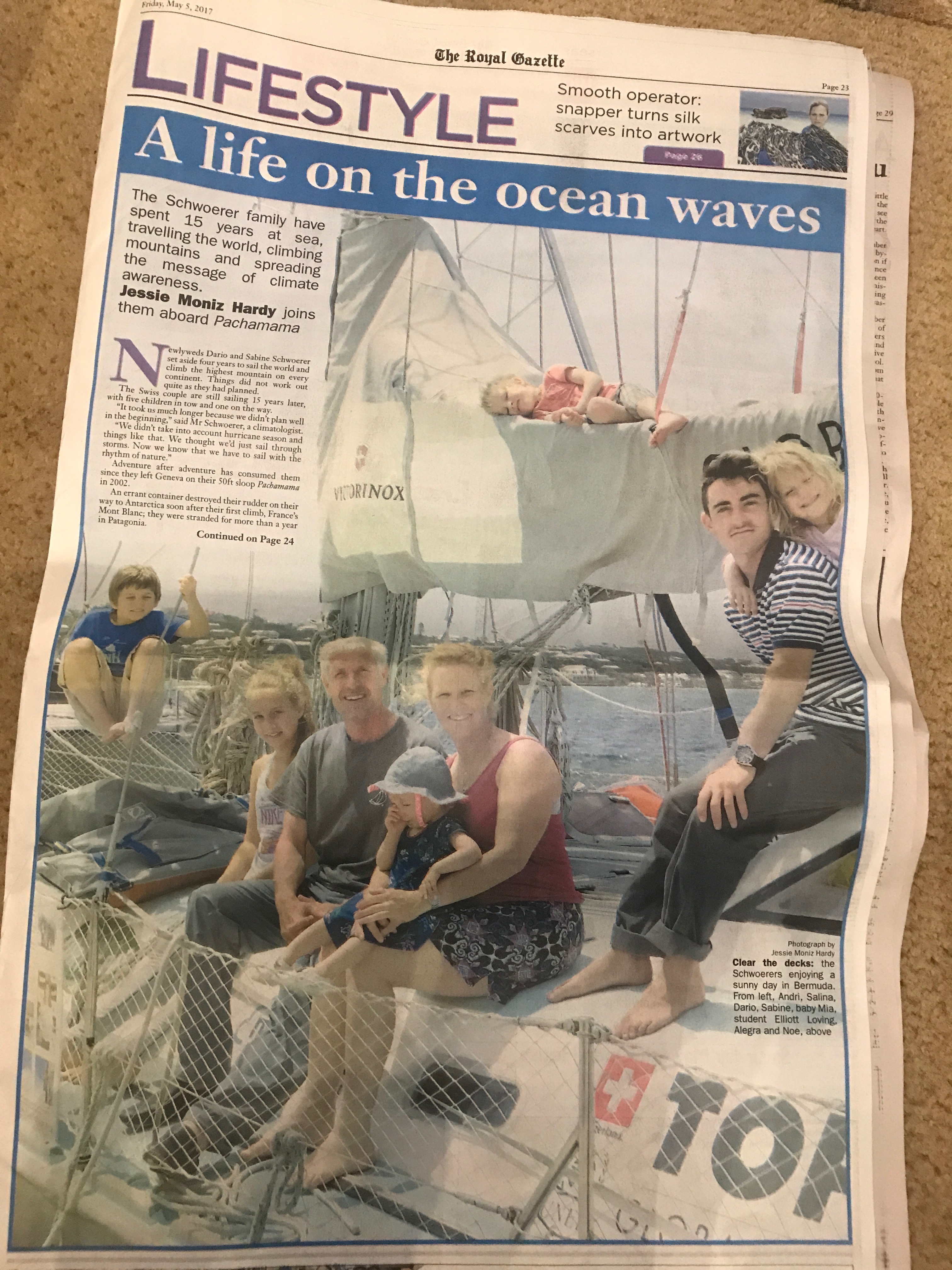 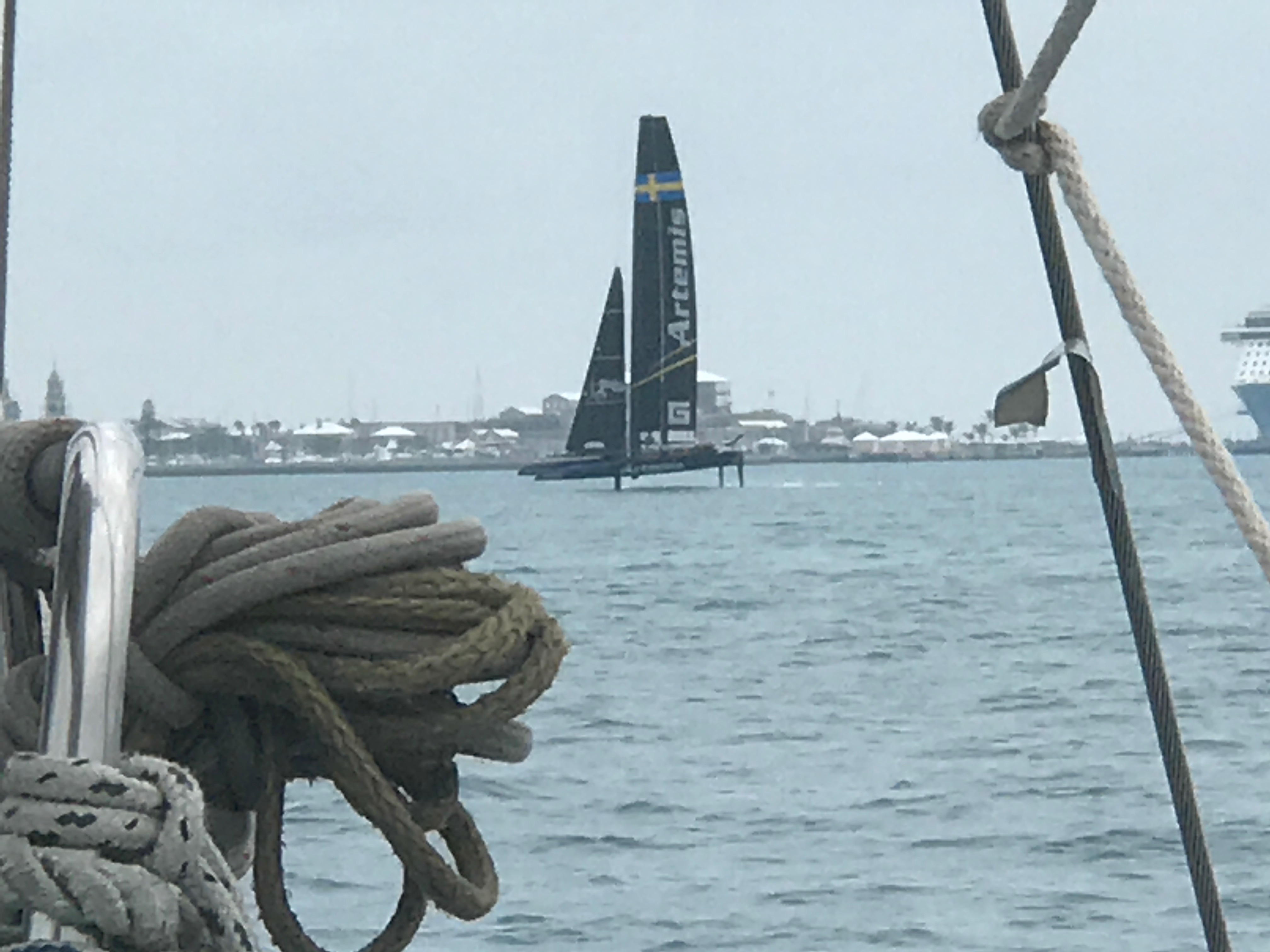 The minute we pulled into Hamilton Harbor we passed by multiple America’s Cup boats training for the upcoming competition. It is amazing to see a boat literally floating above the water using its foils and advantageous use of weight throughout the boat to fly 45 plus knots across the water. The wings produce so much underpressure that the water starts evaporating limiting the speed . Each boat weighs in around 3.5 tons, compared to our boat which is 13 tons, you can see how that can affect the speed. The boats they use here are constantly being changed to be used well in the waters they are going to sail in. For instance, it seems that when a boat tacks, the sails barely move. But, it is the boom that is being altered, not the main sail. This makes it easier to keep the same tension on the lines with only altering which way the wind is hitting the sail. In the race there are 6 national teams competing, but not one from Bermuda. Nowadays in these boats, it is mostly controlled by computer technologies, and because of its changes cannot be sailed in heavy storms or even waves higher than one meters. An America’s Cup boat can travel two times the speed of the wind, meaning when there is twenty knots of wind, a boat can get up to 45 knots easy. Once we docked at RBYC, we took a ferry to Dockyard where we toured the National Museum of Bermuda. It was really cool to see how the maritime industry has had a huge impact on Bermuda itself and on the rest of the world with major inventions and innovations that changed the way we navigate and conduct ourselves on the water. 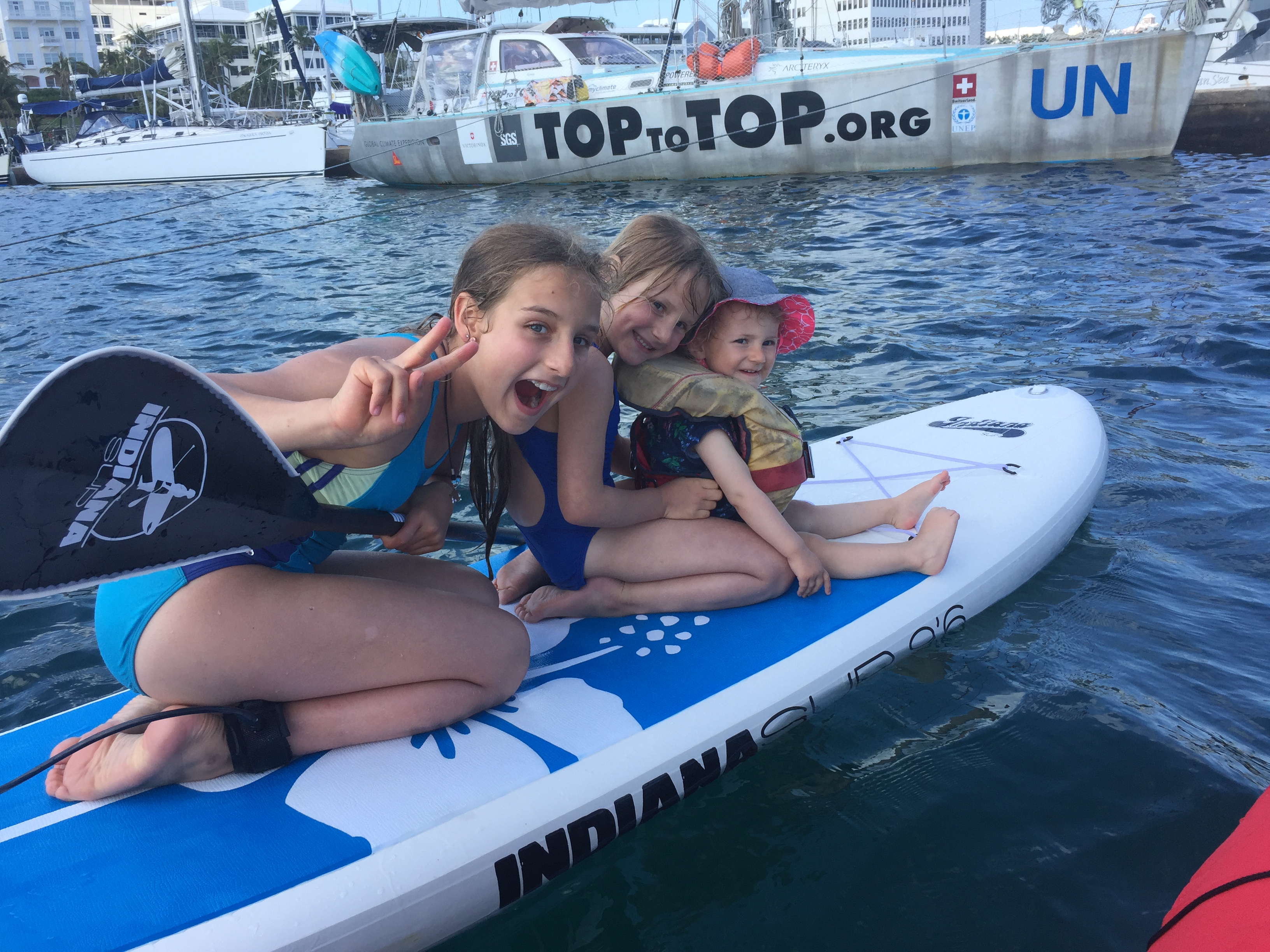 Since New York, I was desperate to go swimming. When we finally saw Bermuda I nearly flipped out in joy of going in the clear, blue water. But not just yet. We still had to go through customs and make it to our anchorage spot on the other side of the island. Right when I felt the anchor hook on the ground below, I instantly jumped in the warm water. Everybody followed in, and we all had an awesome time.

Yesterday, on the 6th of May, we walked the 30th year anniversary “End to End” charity fundraiser in which we walked from Hamilton to the Dockyard, a 24k race. On the way, there was an abundance of pit stops where we could refuel on water and snacks, making the trip feel not so bad. We finally reached the finish line, congratulated by hundreds of people and many tents with gifts and food.

We took the ferry back to Hamilton, then walked up the hill to BHS (Bermuda High School) to a school fair. 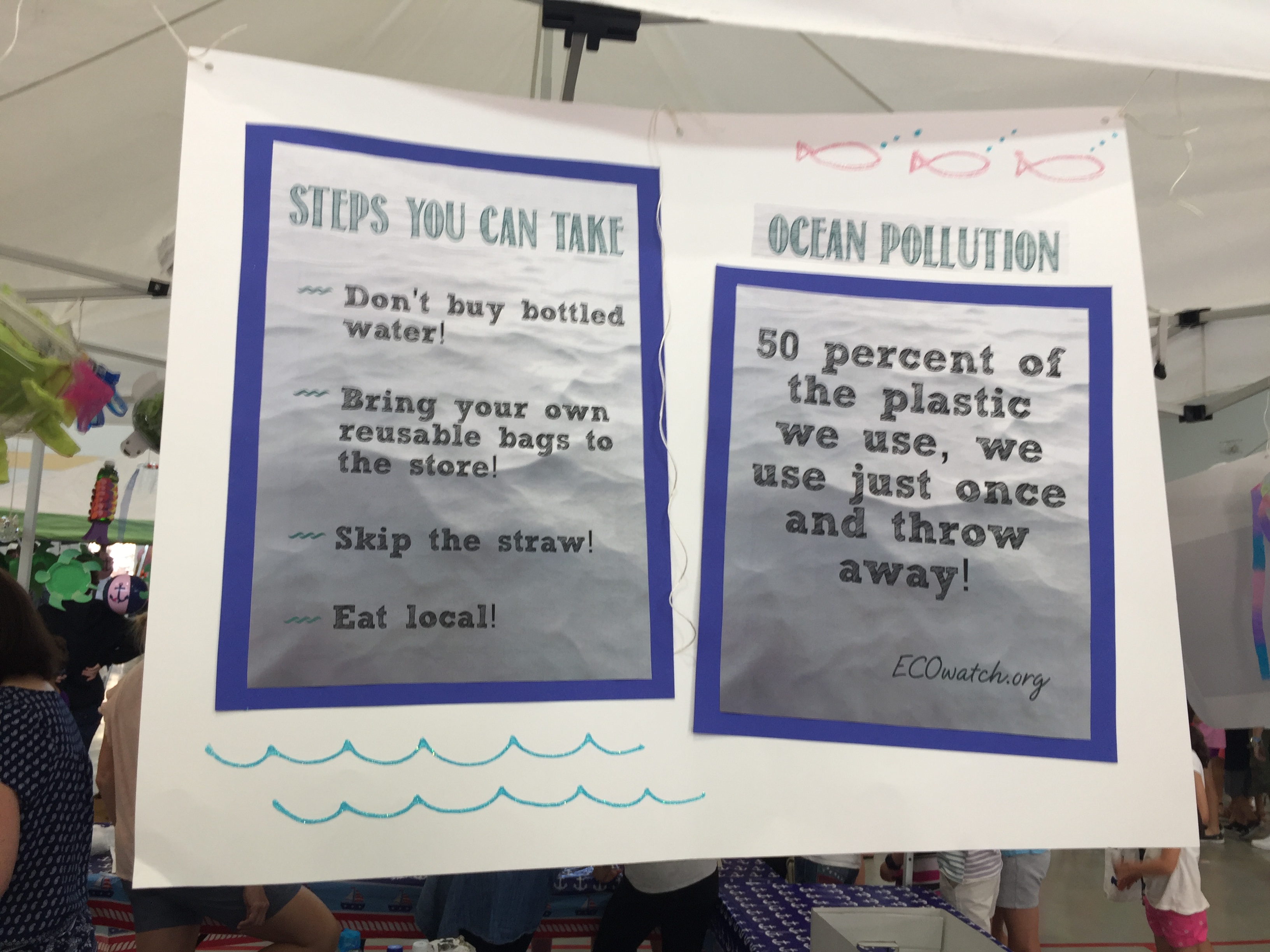 There was a bunch of games where if you win, you were given gold coins, and the more coins you got, the more toys you could trade them in for. I got 2, and my brothers got 76. One of my friends at the fair invited me to her house, taking a steep hill and narrow roads to get there. On the roof of every house, there was a step-like structure with holes that would collect rain water for the house to use. I found this interesting because Bermuda apparently has been in a drought for 3 months, so they find the water very precious. 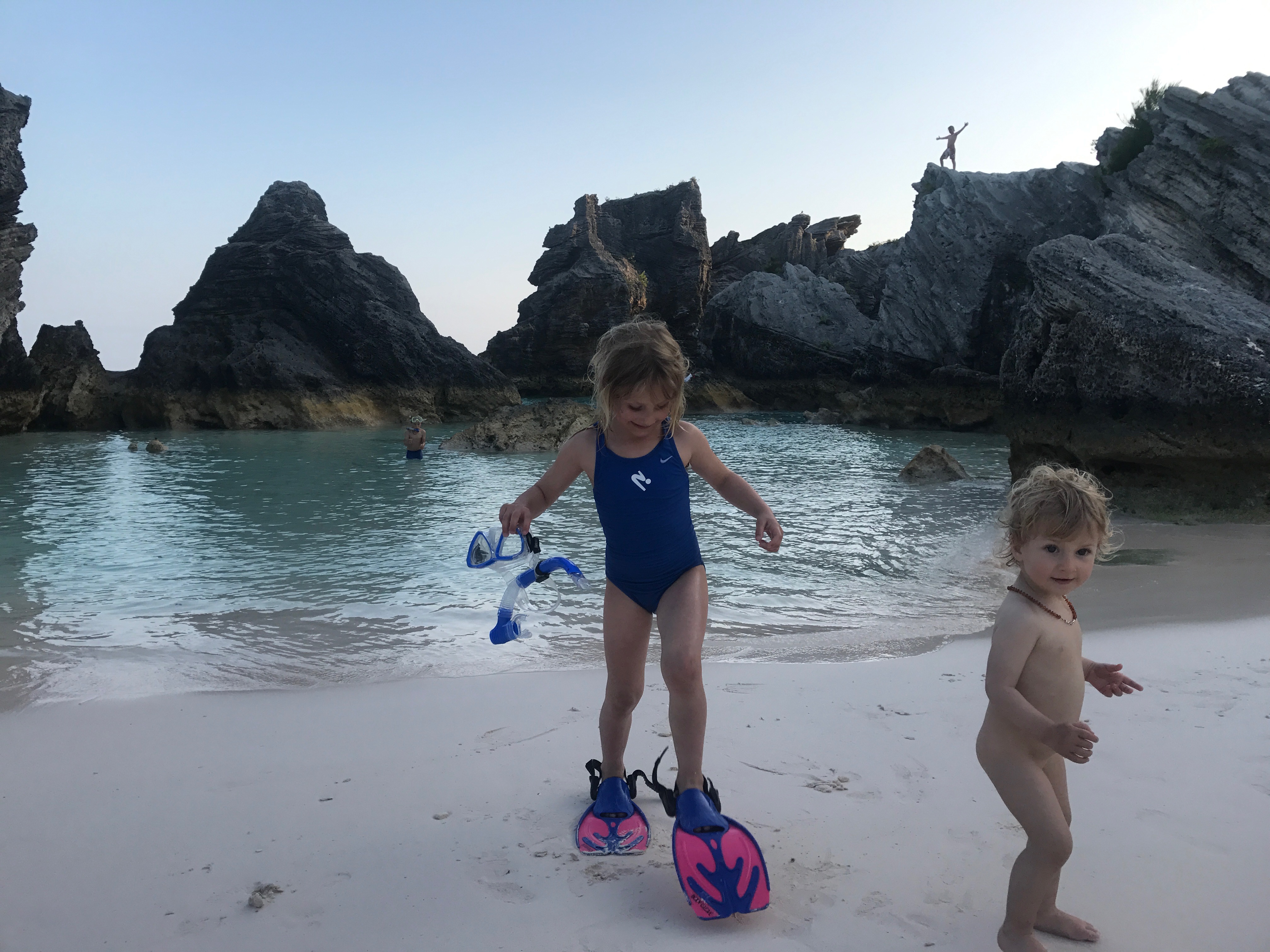 I was surprised with an early birthday gift from my dad of a really nice, new snorkel set. We took to Horseshoe Bay, a beautiful beach on the islands South side where we discovered an amazing array of coral rock spread throughout the beach. I snapped on my new snorkel set and began exploring the wonderful coastline. When we got home back at the Yacht Club, I started fishing and quickly felt a tug on the line. Unfortunately, I caught a puffer fish which is not very tasty and difficult to unhook. It took about an hour before we got the fish safely back in the water. I am so happy we got to stay at the Royal Bermuda Yacht Club because it is a beautiful spot in Hamilton Harbor and everyone is so friendly. The water is even nice to swim here, but we have to look out for moving boats! 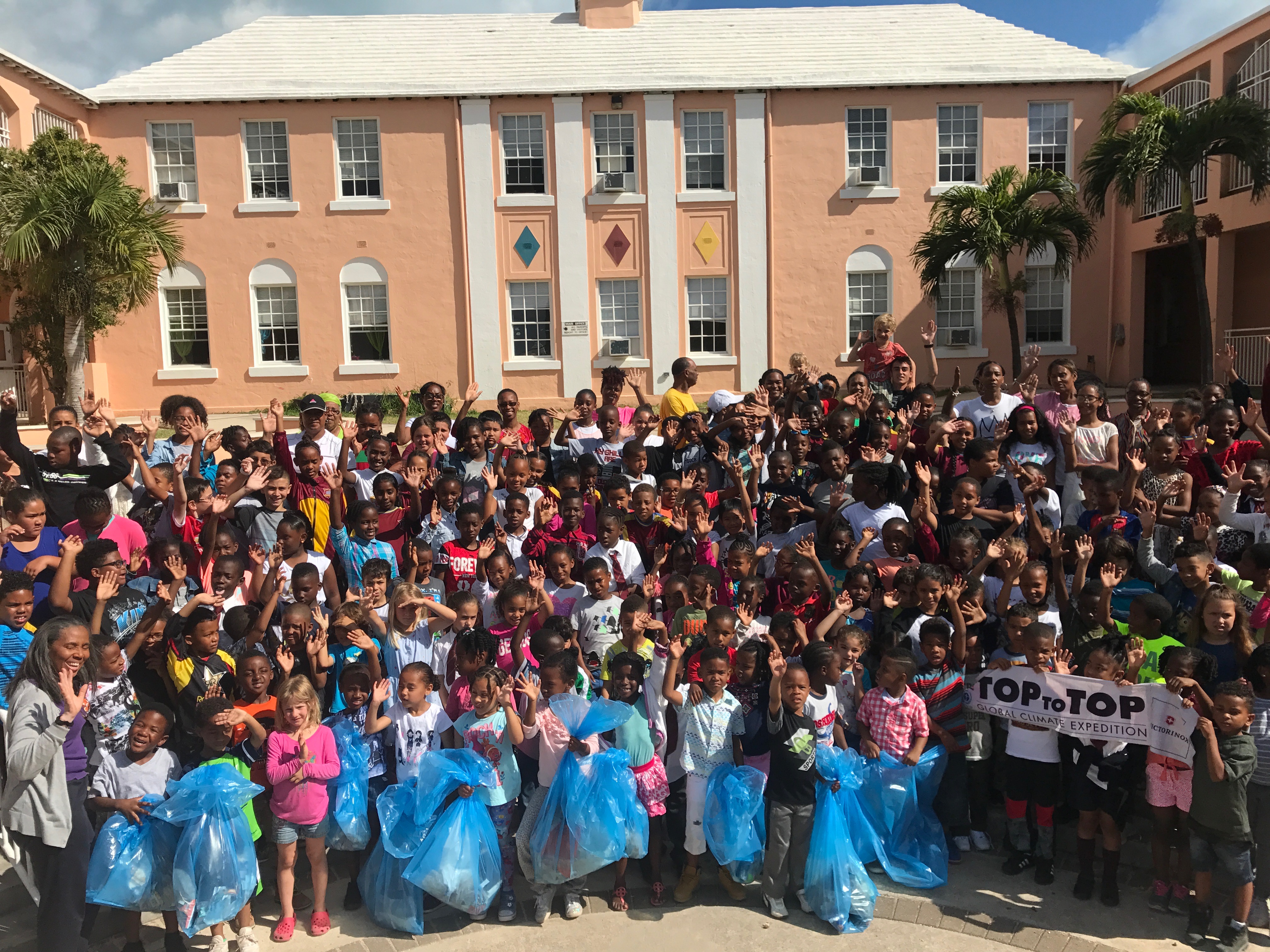 On Friday we visited Northlands Primary School, and gave a presentation about our mission followed by a cleanup of plastic around the school. The students were very nice and invited us to stay at the school the whole day and go through classes with them. We first started with a math class then moved on to the fun part, recess. We learned how to play cricket, a native sport here on the island, then played futbol.

On Sunday the 7th of May we climbed the highest peak in Bermuda, Gibbs Hill Lighthouse together with our friend Fabian Schoenenberg, the Swiss Honorary Counselor, tin 20 minutes to the ocean :

On Monday the 8th of May we did the last two schools in Rockaway and Hamilton, before setting sail on Tuesday. Because of a problem on board we couldn’t manage to do the Somerset Primary School Tuesday morning, but promised to do it when back in Bermuda end of the year. 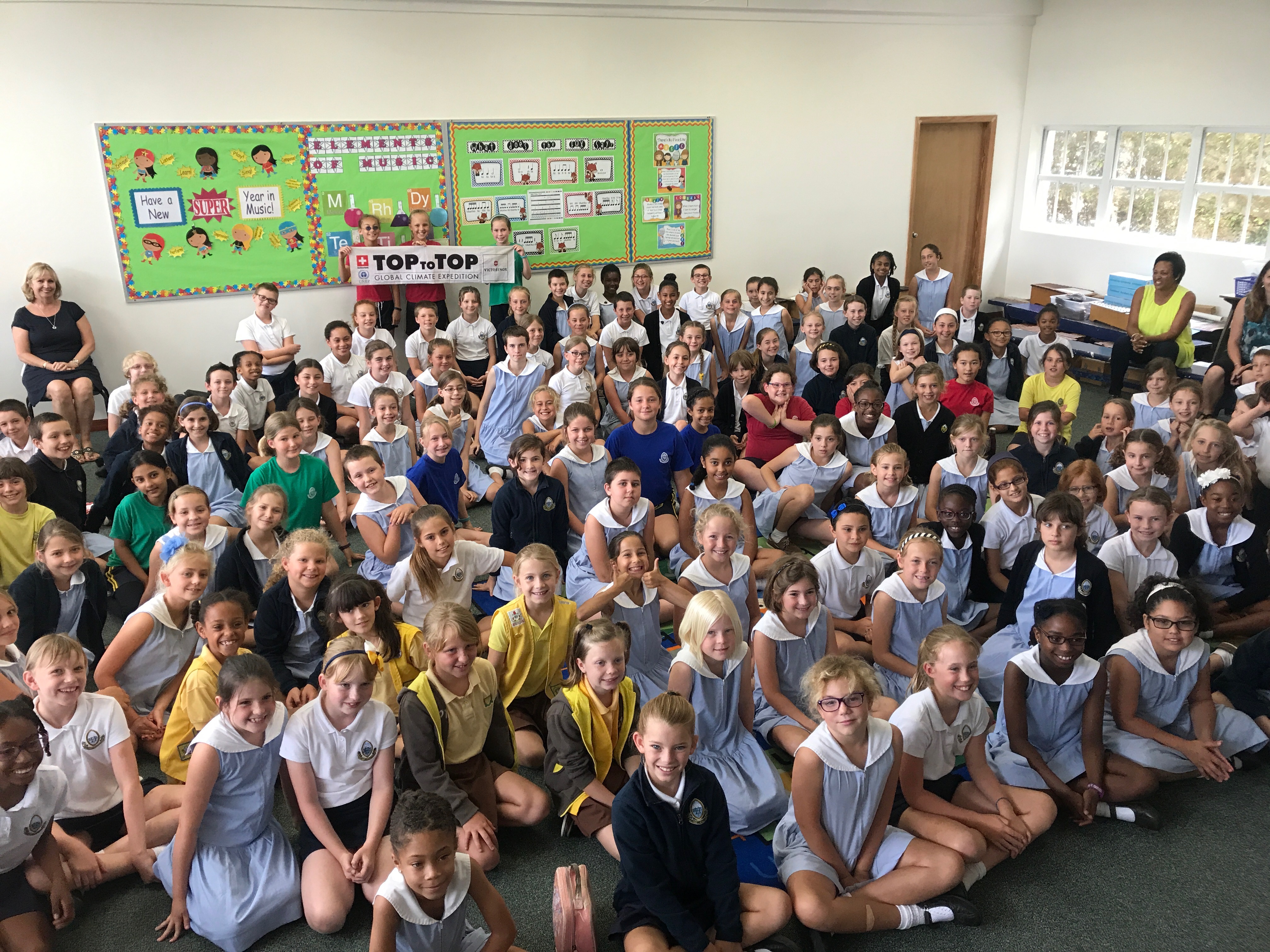 We had the former Swiss Honorary Counselor, Leo Betschart and our friend Pierre Honegger wishing us farewell. 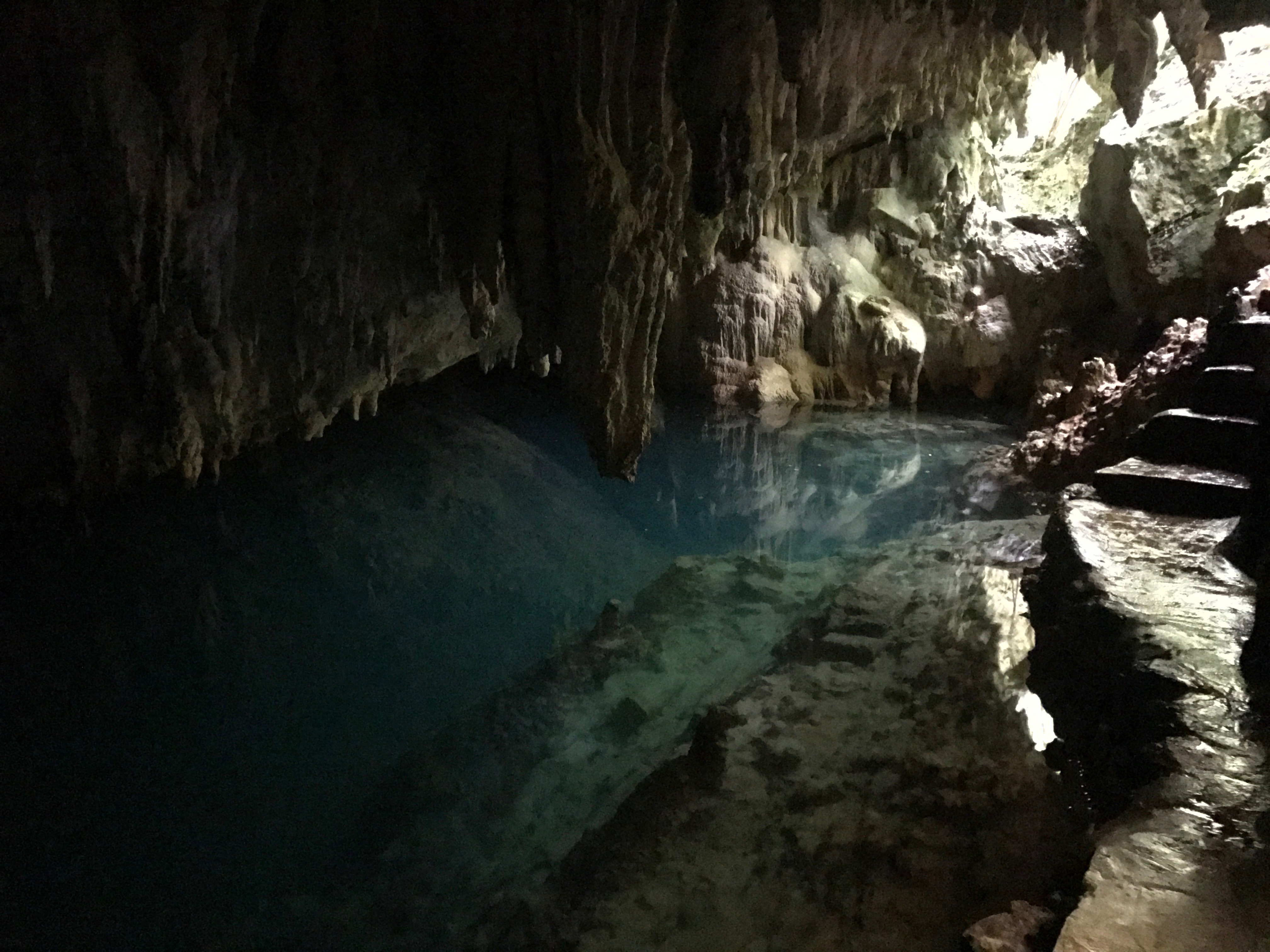 Thanks to our friend Kerri with her daughter Sasha we were able to explore the caves on the island at the last day.

Tom Watlington invited us on his island for lunch: 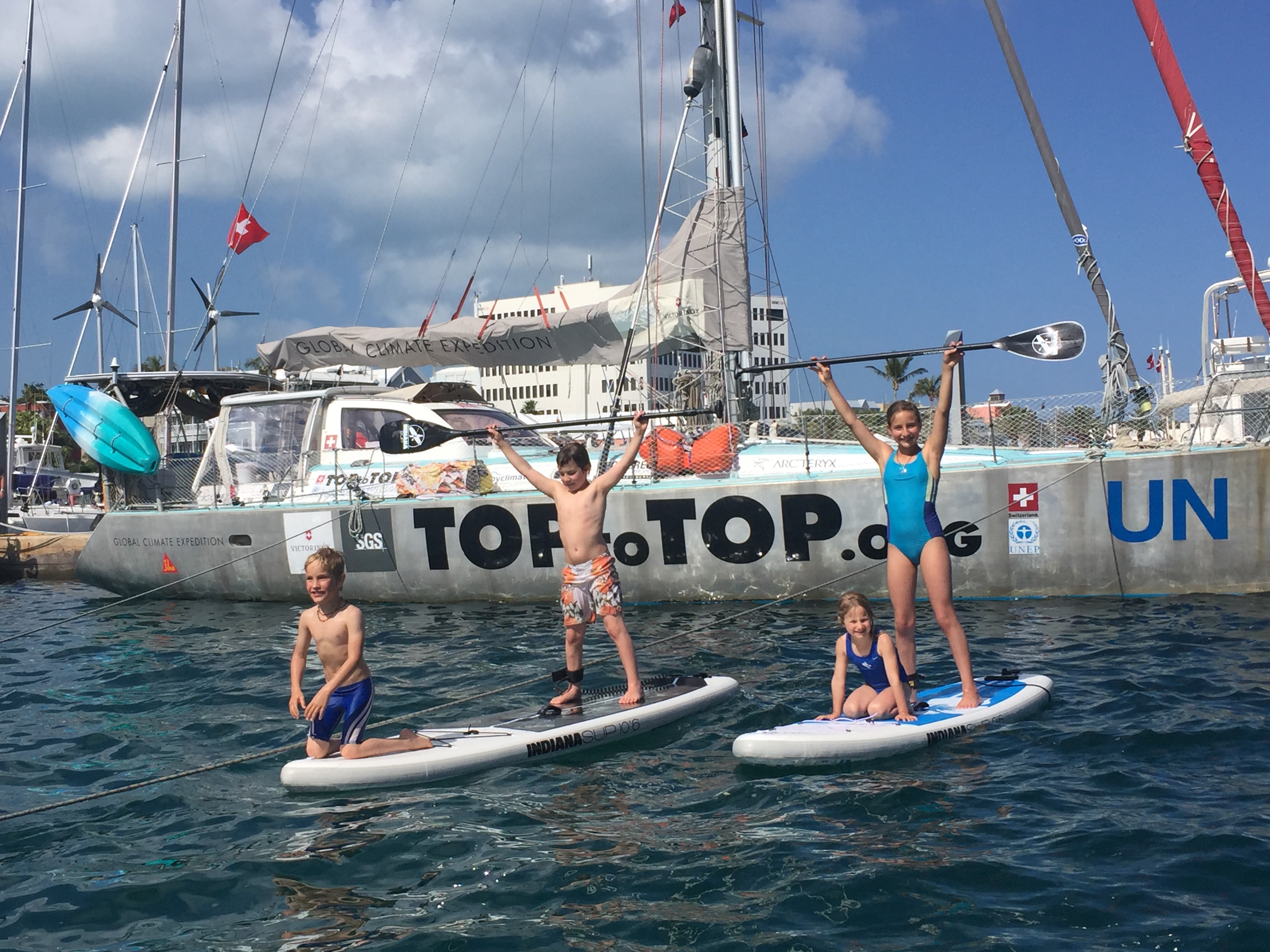 Noé: “So easy to set up, we got it going in less than 5 minutes. Once it was in the water we were zooming! It is fast and easy to paddle, even with extra weight on the board we stayed stable and didn’t get wet unless we wanted to.”

Alegra: “It is so good that it is soft and filled with air so I don’t have to worry about falling at all, I just get to enjoy the paddling. The paddle even changes sizes so someone as young and as short as me can use it perfectly. I wanted to bring snorkel gear with me so I just stuck it below the bungee cord on the nose of the board and it stayed in place the whole ride.”

Andri: “ Its perfect that the whole board fits into a bag which made it easy to carry from one point to another without having the inconvenience of holding the board. The board is so stable it works in any environment from beach waves to just paddling around in the harbor. “

Salina:  “The board gives people the opportunity to see nature from a different perspective and at their own pace, it’s fun to look below the surface and explore the ocean below you, the board makes it so easy to do that. For my mom, she was so excited she could paddle even with the baby with her. This is by far the best experience I’ve had with a stand up paddle board in my life, makes it so easy to connect with nature for my whole family.”