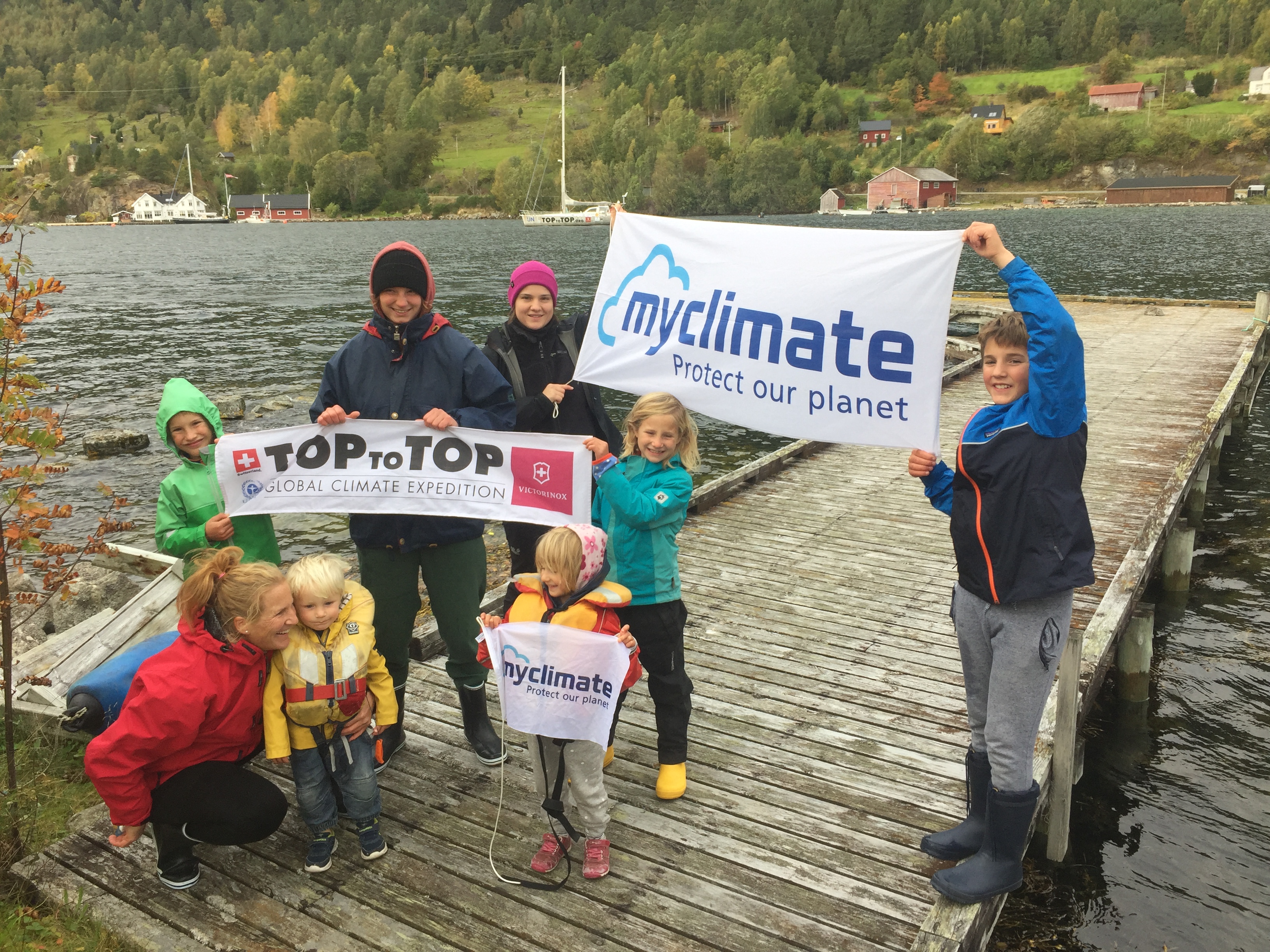 We sailed on Tuesday from Rosendal to Bergen to give a presentation at the high school of Bergen the organization Marine Wide was organizing for us. The students told us the problem of huge distances they have to travel in their country and the problem of CO2 emissions to do so. The solution we had for them once more is offsetting the CO2 for example with myclimate.

School presentation and clean up in Dalsøyra (by Andri)

We sailed away from Bergen, because we wanted to meet up with some friends (Kevin, Naxo, Dris, and David). We met them in Bergen because Kevin and Naxo have a project with microplastic, so we decided to visit a school up in the north and make a presentation together. On the way, we found a climbing spot at N60.33E004.52 and we went there in the morning. We saw the wind coming from the west and I heard on the radio that there is a gale warning for this night. So, we went to a secure anchor place at N60.52E004.55 named Viking Harbour, which was beautiful. Our friends came over for eating spaghetti with us. The next day, the 27.9.19, we got up at 06:30 and went to the school in Dalsøyra and we met an English and Norwegian teacher, Kjellfrid Bothun. The presentation together witch Naxo was very cool. He told the children about the microplastic problem and Dario told them about CO2 and our expedition. I learned that even a plastic bag can exist 300 years more in the wild. We also analyzed the plastic that we found in the clean up before. We saw that the plastic remains, but the color of the packaging disappears. In this school they have a very good recycling system; they even recycle compost in the classroom.

The school class came on board to have a look at the two sailing boats. After that, we went to the teacher’s house on another island, Losna, because she invited us to have supper with her. Kjellfrid knows very much and cooked two times very good food for us. We stayed on the island for two days and we could go fishing with her husband. The next day everybody got up at 06.30 again and we sailed off in the Sognefjord, the longest fjord in Europe.

As I stood up, we sailed into the Sognefjord. We had school and it was a little bit annoying. Then we anchored in this place: N61°006,619’, E005°45,235’. Sadly, we could not anchor at the place we were wanted to go climbing, because the cliffs went too steep into the water. In the middle of the Fjord, it is about 1300 meters deep. On the way to the climbing place, we saw some porpoises. Lea nearly freaked out because she didn’t saw them. As we came to the place at 3 p.m. we met a family near the climbing cliffs. The climbing was very hard. As we were done with climbing, we went back to the house of the family and saw that they had an apple tree. So, we went picking apples. As we came back to the boat, we saw that the tide was very low, about one and a half meters lower than before. We showed the father of the family our boat. When we were outside, I started fishing. I caught a fish, a pollack. Then he said that a fish farm has broken, and many salmon escaped out of there. He said if the fish mate with wild salmon, it’s very bad. So, the fishermen must catch many salmon. He told me that 17’200 salmon escaped. Then I was very tired, and we went to bed.

The next morning, we were in an ice-cold Storm. Lea and Laura screamed very loud because they saw a wonderful rainbow. Only with the staysail, we sailed very fast, 8-10 knots. I saw on the highest mountain peaks, that there was snow. Then we anchored in a calm place beneath an island with a little church. Our book says, that it is the smallest island on the planet with a church. On that island, there was very much garbage near a creepy house. We were sad, that we could not do a clean-up. Now I must quit my blog because it’s freezing cold and I have to knit a warmer pullover.

One thought on “Bergen – Dalsøyra – Losna”