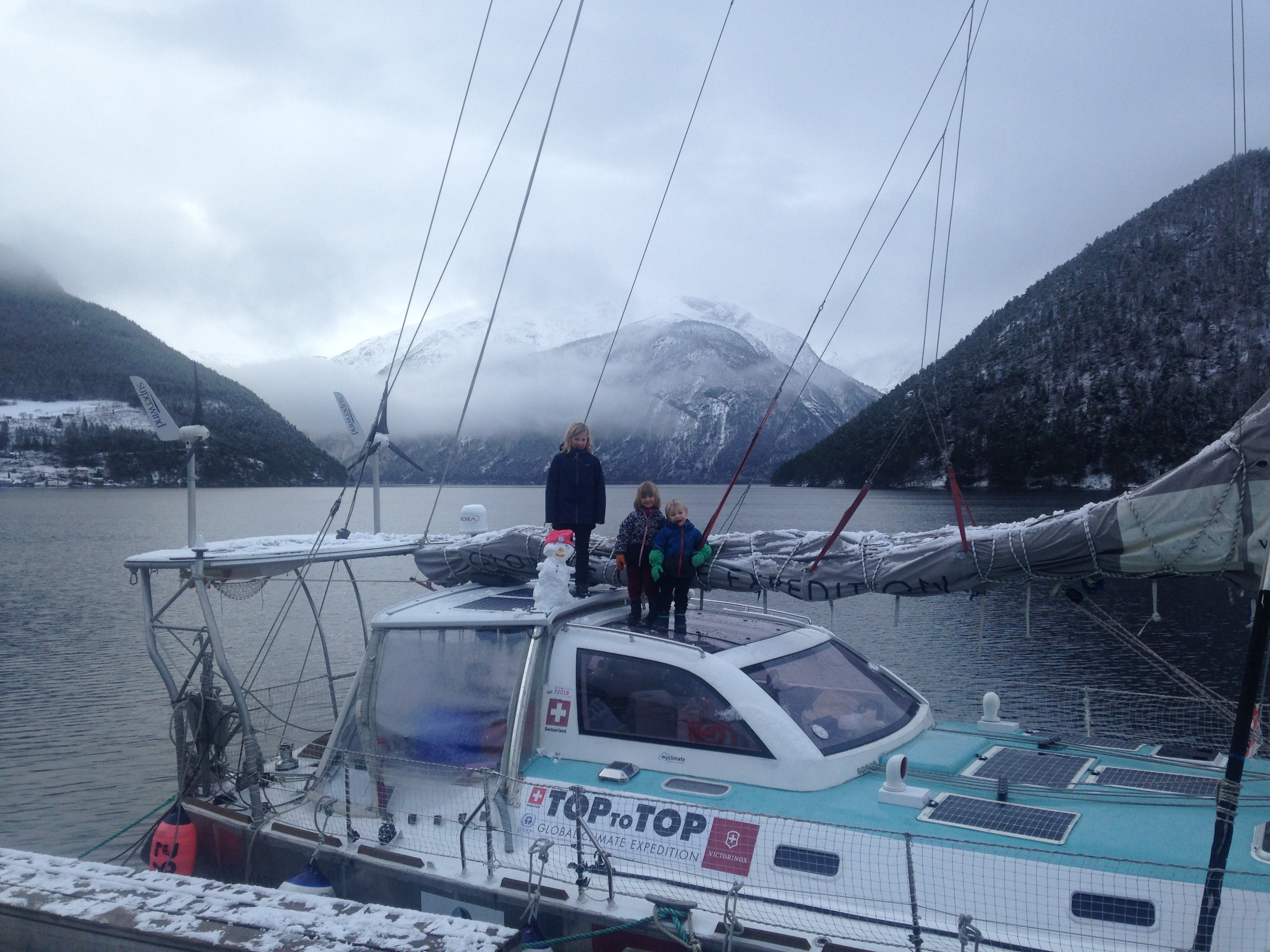 It’s been a month since we got back to Kaupanger where our expedition boat is moored since October 2019. In the so-called “Amblabukti Bay” the steep slopes of the surrounding hills fall directly into the Sognefjord. After the weather was relatively warm and dry all January, the first snow finally fell down to our Pachamama in the last weeks. Hence, the kids were able to build snow figures and we could climb some of the magnificent peaks in the Sogndal region with our touring skis. The “Frivilligen Center” also equipped us with cross-country and alpine skis so that we could switch to the slopes when the snow conditions were less favourable. The centre is an important institution when it comes to community building among newcomers and long-established residents in Sogndal. In addition to the provision of sports equipment, several free events are being organized during weekdays and evenings.

One of our highlights in the past weeks was the ‘Fjellsportfestivalen’ that took place in Sogndal from February 20th to 23rd. In line with our own philosophy, the festival encourages people of all ages to experience nature by engaging in winter sports. Various competitions in the categories freeride, freestyle, ski touring and several fun disciplines were offered during daytime while photographers, sports(wo)men, and organizations were giving public talks, presentations, and discussions in the evenings. The uncomplicated and open-minded setting invited a wide range of people to watch and participate. Many outdoor enthusiasts from all over Norway came to join.  On Thursday morning, Dario and Simon were part of the avalanche rescue team for the ‘kick-off’ free-ride competition. In order to analyse the snow stability, they had to be on top of the mountain at 6 a.m. Unfortunately, the event had to be called off due to poor visibility. However, people did not seem to let the clouds spoil their mood so that the atmosphere was exuberant throughout the whole festival. The whole Pachamama Crew, except for the smallest two, participated in the ski touring race on Friday morning. This was a great experience for all of us! Although Ski Touring is catching up on Nordic Skiing in Norway, competitions are still not as widespread and common as in Switzerland. On Saturday evening we were having a presentation as key-note speakers in front of a dynamic and very sympathetic audience.

The days after, we took advantage of the great weather conditions and went ski touring almost every day. On Wednesday, we also had two presentations at the Kaupanger Secondary School and at the Sogndal Heibergian Collection Museum. The first one was scheduled in the morning with an energetic group of high school children in the age between 16 and 18 years. The following presentation was held in the evening in the seated main room of the museum. The positive reactions of the very diverse audiences during our (10+) presentations around Sogndal showed us once more in a very nice way how many people are eager to set good examples for our planet. This feedback gave us a lot of positive energy that we can reinvest in our projects.

On these occasions, we could also inform about our next two big events that are planned for March. The first one is a cleaning up campaign in Sogndal on February 7, for which we would like to inspire as many people as possible. The second one is the “Fjord 2 TOP Expedition” from the longest fjord to the highest peak in Norway at the end of March. Norway is a unique place where the Ocean meets the Mountains and the Glaciers feet of the Sea. This interconnection we like to show in this outdoor activity and celebrate the wonders of Norwegian natural wilderness. We are sailing from Kaupanger to the end of the Sognefjord on two sailboats and move further on skis to get to Galdhøppigen. On the way,  we stop at several huts. Here, too, we would like to motivate lots of people to join us so that the event could even become an annual tradition. In the next three days, we plan a small tour in the Sogndal region in order to check our Material for the big trip (Simon, 02.03.2020).

In the weeks we were staying in Kaupanger we have adapted some kind of a routine. We do homeschooling from Monday to Friday,  we take violin lessons every Wednesday, we attend the cross country- and alpine ski training on Tuesday and Wednesday, and we spend the rest of the time climbing, ski- touring and preparing our presentations and events. The stay gave me also an opportunity to take a closer look at the beautiful surroundings of our boat dock. In this blog, I report on the lifestyle and habits of the people in the region on the one hand, and on nature and landscape surrounding us on the other hand. Some of this information I have gained in our weekly geography classes – others I have gathered through my own experiences here.

Kaupanger is located on a branch of the Sognefjord, which is the longest fjord in Norway. At some points, it reaches a depth of 1.3 kilometres which is a lot more than the all of the North- and Baltic Sea. Fjords are inlets of the sea that extend sometimes far into the mainland. They were formed when the valley glaciers retreated after the last ice age and left trough-shaped valleys towards the coast. The fjords in our region are surrounded by hills, some of which fall steeply into the sea. It is not uncommon for avalanches to fall into the fjords in winter. Most of the hills are overgrown with conifers and birch trees. This typical vegetation in southern and central Norway is called the “Fjell”. Further north the vegetation is called ‘tundra’; The tree line here reaches sea level so that only bushes and smaller plants can grow. Elk, wolf, lynx, brown bear and red deer are native to the forests of Norway. On the coast, you can find big schools of fish such as cod, flounders, haddocks, mackerels, halibuts, stone-bites and sea trouts. While the Vikings used to live here as hunters and gatherers a thousand years ago, all of the food is now available in the supermarkets. Furthermore, fishing developed into an important export industry of the country.

To get from our ship to the nearby village Sogndal, you have to cross a robust bridge to the other side of the fjord. The shopping centre, the university, the climbing hall and the football stadium are among the striking buildings of the town. The residents seem to be friendly and courteous. Lots of them engage in skiing, cross-country skiing, ski- touring, climbing and other outdoor activities. We also practice each of these sports at least once a week.

Lots of cars in Sogndal are electrically powered. In all of Norway, electric cars are promoted by tax breaks, exemption from toll and ferry fees and permission to use the bus lanes in larger cities. From 2025, cars with combustion engines will no longer be allowed to be sold. 98% of domestic electricity requirements are currently taken from “clean” sources. You can find lots of dams and hydropower plants in the mountains around Sogndal. Norway wants to be the first nation in the world to exclusively use renewable energies. However, the country’s economy is also largely dependent on petroleum promotion. Around 440 million litres of oil are extracted every day. Since the raw material was first discovered off the coast in 1969, Norway has quickly become one of the biggest exporters in the world. Nowadays, the former poor country finances its education and infrastructure from this income.

Sogndal lies on the northern latitude of 61 degrees. Accordingly, the days in December and January were relatively short and dark. This phenomenon becomes more extreme the further north you go. The North Pole is even dark twenty-four hours a day in this season. One speaks of the polar night! The opposite is true in summer when the north pole is illuminated by the sun twenty-four hours a day. In this case, one speaks of the polar day. The contrast of day- and night length increases the further you move from the equator towards north or south. In the next few weeks we will sail further north towards Tromsø and I can read my books till late in the evening! 😉  I’m also hoping to see the Northern Lights; a phenomenon that is caused in polar regions when accelerated charged particles hit the atmosphere.

Noé & Alegra: Our experiences at the Fjellsportfestivalen:

On Thursday morning, we arrived at the ski area with the whole family when the lifts were opened. When we arrived we met a whole bunch of cheerful people. Apparently, the clouds did not affect their mood at all!

The two of us were most looking forward to the “Paintball Biathlon” at noon. For this fun game, we had to sledge down the slopes in snow sliders and then shoot three objects with coloured bullets. The competition showed us how difficult it must be in biathlon to run fast and still shoot calmly every now and then.

In the afternoon, we could watch the freestyle competition on the quarter pipe. A lot of people of different levels took part. The atmosphere was relaxed and not too competitive. We also brought our alpine and cross country skis so that we could enjoy the new snow ourselves after the event. Our personal highlight of the day was the free pancakes in the restaurant. After that, we visited the flea market at the festival and then went then home to get some rest for the next day.

On Friday, we participated in the ski touring race with the Pachamama Crew. Sabine and Simon took turns in the race in order to watch the two little ones in between. Since we were the only children participating, we were specifically mentioned and honoured at the award ceremony in the evening.

On this occasion, we also joined some of the talks and presentations. One of them was held by a photographer who sailed around the world like us. Doing so he took mind-blowing pictures of the natural spectacles he encountered on his journey. As volunteers and keynote speakers we got free entrances for all events.

On Saturday it was snowing all day. Hence, we used the day to relax and prepare for our presentation in the evening. For the introduction, we practised a theatre pointing out that events like the “Fjell Sports Festival” depend on a snowy winter. “We do want to ski and not just water ski” was our message. People seemed to have fun with the performance and presentation.

One thought on “Sogndal Fjellsportfestival and Presenations”