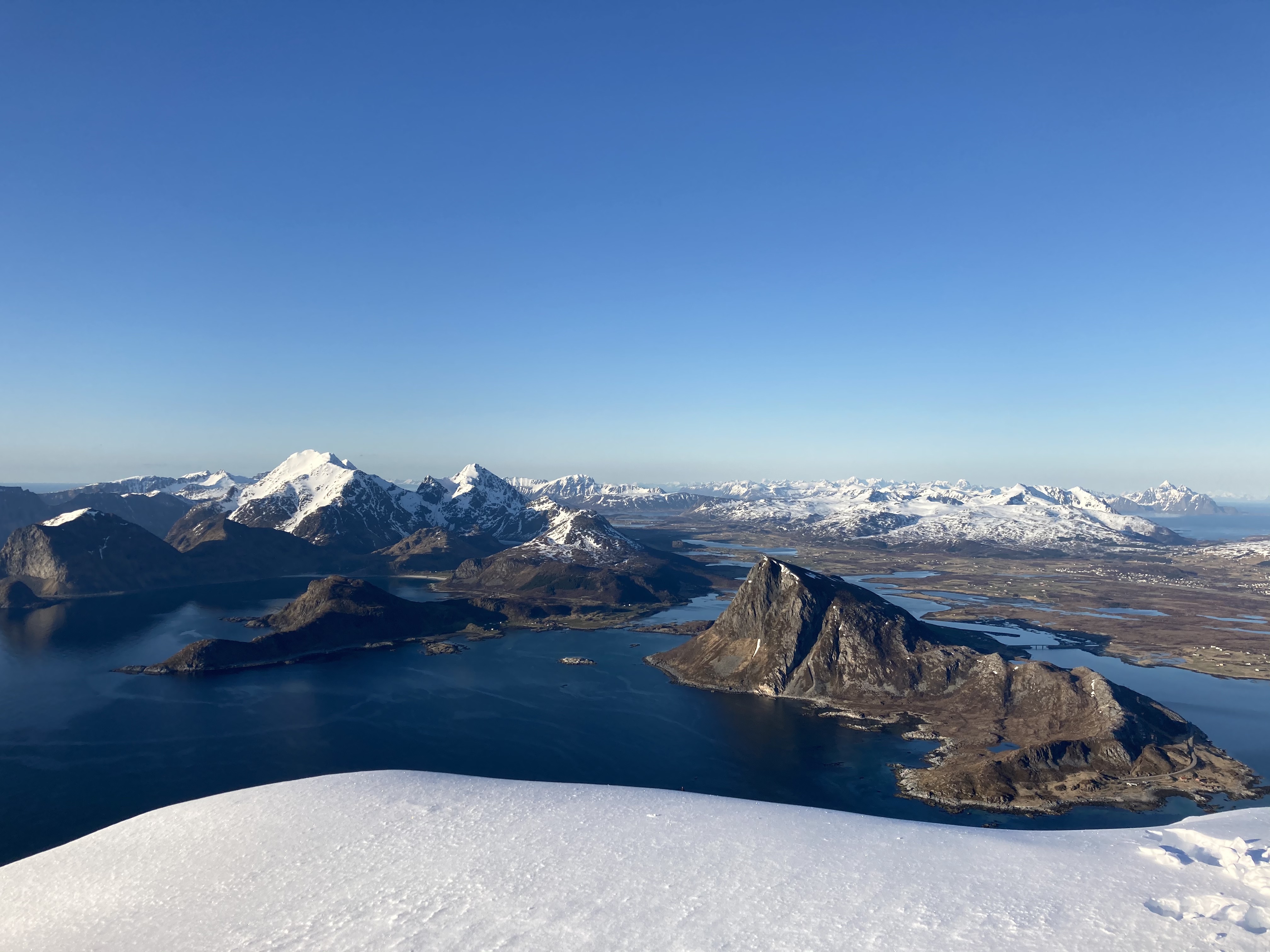 Upon our return from Flåm,  it took us roughly one week to clear our temporary home at the end of the Sognefjord. Even after 20 years of moving around, it is not easy for us to leave a place like Kaupanger, where we have felt so comfortable for the last seven months. The most difficult part was to say goodbye to all the kind, generous and warm-hearted people who have become an indispensable part of our global family. On Mother’s Day, we slowly moved out of the 205 km long fjord towards the open sea. As the wind in the sheltered inlet is relatively weak, we were able to take our time to break away from our familiar surroundings. Filmmaker Jørn and Climate Change student Simon accompanied us on the first leg of our journey, as did our dear friend Odd Tufte and his family.

We then made the first stop on the island Losna, where our friends Einar and Kjellfrid gave us a warm welcome. When we sailed to Norway in October 2019, they were two of our first acquaintances in this country. The weather changed to winter at short notice and it was once more amazing to find ourselves in this small patch of land dominated by rugged coasts and spherical meadows!

An at least as spectacular landscape was revealed to us on our next stop on Vaerlandet. The humid wind from the Atlantic together with the warm Gulf Stream and the close distance to the steep coasts of the mainland give the island a “warm”-humid climate that rarely leads to precipitation. So it was all the more astonishing that the very first snow of the winter fell right at the time of our arrival in mid-May! When the weather conditions changed to springlike in the afternoon, the gravel paths through the picturesque volcanic island invited us for a vivid discovery walk. Spontaneously, we cleaned up a contemplative beach, which was covered with plastic by the strong current from the south. The organic farmer Hilde Buer and her husband Anders Braanaas, who keep around 550 sheep, helped us with this action and invited us to their beautiful home for dinner. As their house is built to 100% from materials from the surroundings, it is hardly recognizable in the landscape from far. The dining table and the floor are made of lava stone from the primaeval continent of Pangaea, which has resurfaced in Vaerlandet after 150 Million years. Since the house is off the grid, the couple obtains its electricity from solar panels in summer and from wind generators in winter. Though the location is exposed to strong winds so that every propeller has been burst in the past years. And so we happily recommended them our own wind turbines from Superwind. Klaus Krüger provided us with the sophisticated regulatory system 16 years ago in order to test it under the most extreme conditions. Since then, it has withstood every storm and delivers electricity in a continuous and reliable manner.

The next morning we set off to meet with representatives of the ‘Red Cross Nordic United World College’ in Flekke where we were supposed to give a presentation two months ago. As one of currently 17 United World Colleges, the school focuses on a nordic, environmental and humanitarian education. The sustainable and future-oriented guidance made a congenial impression on us and we could well imagine sending our own children to one of these Colleagues! One last stop on our way north, we made in the harbour town Ålesund, where we stock up on necessities for the crossing. After that, we meandered through various islands and drifted out into the open sea for two days. Again, we were impressed by the beauty of the glacial mountains along the coast, whose steep cliffs rise out of the sea like mighty bulwarks. On the 16th of May, we crossed the Arctic Circle and sailed towards a permanently bright horizon.

Soon, we recognized the farthest foothills of the Lofoten archipelago that is almost as old as the earth itself. As the liquid ball of embers cooled 3.5 billion years ago, a crust formed over the still glowing hot mantle and the first mountains rose. Over the next 3 billion years, the islands sank several times into the earth’s interior, deformed and rose back to the surface. 500 million years ago, the Caledonian mountains formed the “motherland” Norway and gave the Islands largely their present topography. Every mountain, it would seem, is a metaphor for a legend.  Traces of human existence go back to the older stone age 7000 years ago. From the 3rd millennium BC through the Iron Age, agriculture was pursued and the first chieftain’s seats were set up. In the 9th century, the Vikings founded Vágan as probably the first town north of the polar circle.

On Sunday, the 17th of May 2020, we arrived in the village of Ballstad just in time for the celebration of the Norwegian National Day. As soon as we docked, we were inaugurated in a festive parade with one hundred other ships. Thus, we raised the Norwegian flags and welcomed a bunch of locals on our ship for the spectacle. Such contrasts are not uncommon on our Pachamama; You don’t meet a single soul for days and weeks and instead of a slow arrival you abruptly find yourself in a roaring circus of sounds and crowds (of course with the necessary distance ;)). As soon as we returned to the dock, we were invited by our new friends to a sumptuous feast. “As much ice cream as you can eat” – is the credo for every child in Norway. Apart from that, we were spoiled with a wide range of local specialities. Among these, the so-called stockfish is particularly well known. It is mainly cod, which is preserved by air-drying and optional salting. The fish are tied together by the tails and hung on wooden racks. These “stokks” have shaped the landscape in Lofoten from the 8th century onwards. From the 12th century, Stockfisch served as a barterable commodity for large ship convoys from Nordland down to Bergen. Later, the conservation method was used to feed armies and ship crews. As is well known, the Vikings discovered America three centuries before Christoph Kolumbus and his companions. The Norse(wo)men owed their advantage over other Europeans not only to the advanced technology in shipbuilding but also to their knowledge on the preservation of non-perishable food. Until well into the late 20th century, stockfish was regarded as “poor people’s food” due to the great occurrences. Since 1978, however, fishing has steadily declined and the classic stockfish has become relatively expensive. But even if the Vestfjord today only yields fractions of the quantities caught in the past – Lofoten has remained the “archipelago of cod” and keeps attracting a large number of fishing boats and winter tourists. The quiet spring in Ballstad is, apparently, more likely to be due to the spreading pandemic than to declining fish stocks. One way or another, Ingvar and his wive Torgun kindly invited to use the facilities of the Kræmmervika Fishermen Hotel during our stay here. And so, we were (once again) able to celebrate Alegra’s birthday in the rooms of a spacious guest house. Our good friend Hanne, who has lived in Lofoten for 15 years, spoiled us with her friends to the letter. It was not the first and not the last time that the sun and good company kept us awake until late in the evening.

As the exceptional winter is expected to last till the end of August, we are happy that we dragged our skis up north. Out friend – and excellent kayak guide – Román Aguaviva took us to some breathtaking viewpoints in the region. Since pictures are known to say more than a thousand words, I will refrain from describing the view in detail. While the wind was still a little calm for surfing, we took advantage of the conditions by a two-days kayak course!

In order to make the most out of our outdoor activities, we have also carried out two more beach clean-ups last weekend (Simon, 25.5.2020)!

Noé – One day on Vaerlandet (For english use deepl)