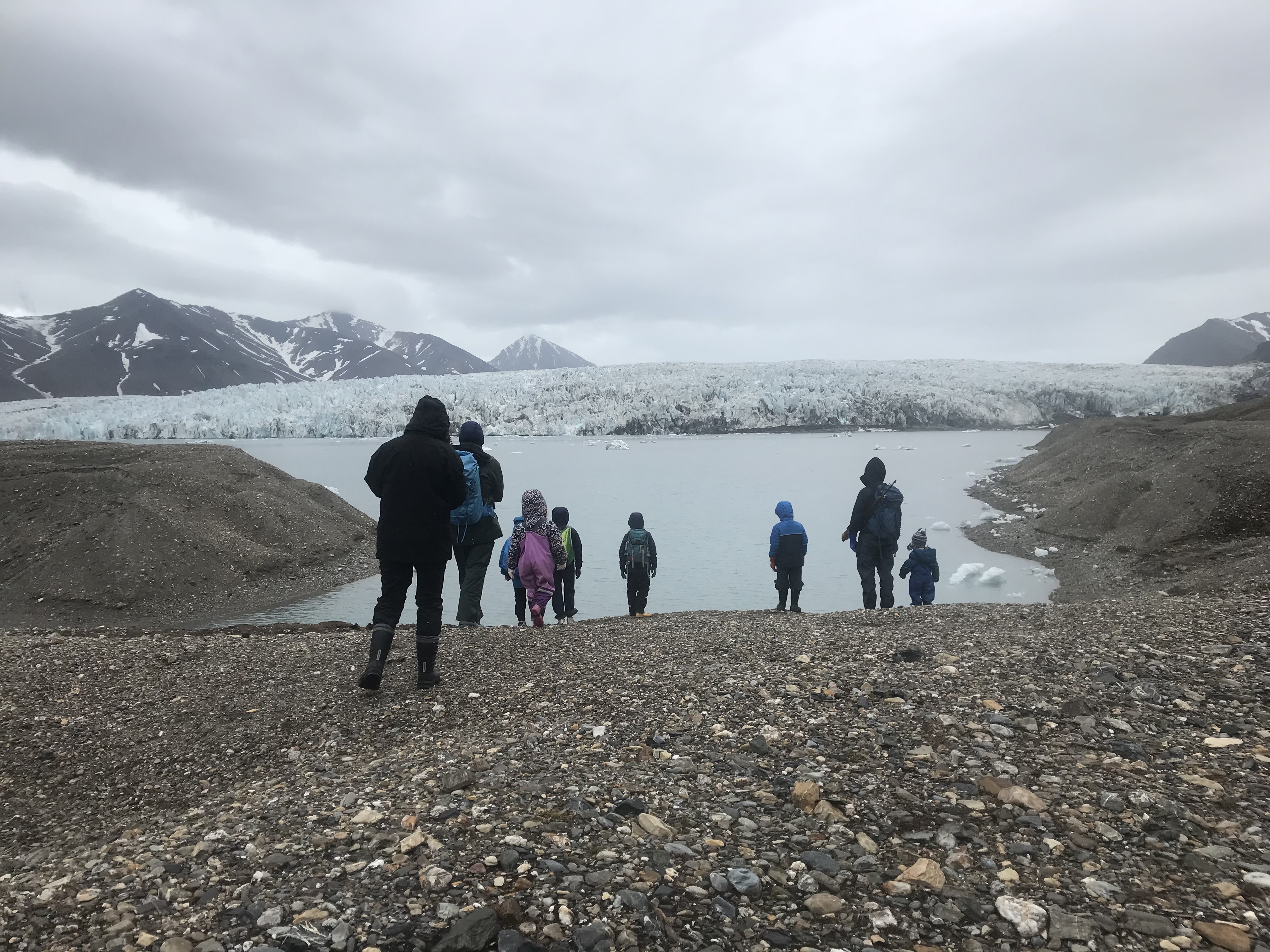 Watch our new film “TOPtoTOP sails stormy arctic waters to sample micro-plastic in Svalbard” and read our report to find out how we made it to Svalbard!

From the ‘Top of Finland’ back in the Lyngenfjord, it was soon time to pack up and get ready for our big project in the North. As is well known, the sea between Norway and the southern Tip of Spitzerbergen can be very rough and every possible time window with good weather must be used to set sail. Shortly after Salina and Meret reached us save and sound (see the last report), fortunately, also the lost-thought luggage followed. Hence, we could start our first expedition stage from Lyngen to Alta. Just arrived, our friends Inger and Lars Krempig spoiled us with a delicious meal, a warm shower, and even some relaxation in their garden sauna. We especially enjoyed gobbling up vegetables and fruits for the last time, knowing that these pleasures will be meticulously rationalized in the weeks coming. Inger is a tutor for biology at the Alta University and Lars teaches young adults arctic survival skills in the local ‘Folkehøgskole’. With their children, Narve, Runa, Ida, and Guro the couple produced a series of thrilling outdoor movies with the title „Villmarksbarna“. For our trip to Svalbard, they were able to provide us with some precious advice, a couple of maps, and a riffle for polar bear attacks. Hoping to never actually use it, you have to be prepared for all eventualities on this remote Arctic Island. After the last big shopping in Hammerfest and a skilled food-Tetris on the mama-boat, we were finally ready for the crossing.

The sea was choppy at first, but settled off the coast of Bear Island. The wind forecast, however, provided us with two options; Either we stop at the Island and wait for one whole week or we sail through and make our first stop in Svalbard. Given a rather tight time window where the ice in the north is passable, we decided on the latter option. The ongoing rhythm of two hours watches and four hours break in a steadily bright and cloudy environment made us feel like in a semi-awake delirium for three days. One difficulty was caused by a loose Dingi which we almost lost in the high waves. Only masterly teamwork in a hectic night shift could solve the problem. Another issue was caused by two broken toilets, which forced us to do some balance exercises on the deck every now and then. In between those acrobatic feats, we took diligently care of our microplastic samples. So who thinks that sampling is a piece of cake has definitely never been on the Greenland Sea! 😉 For our encouragement, though, we were faithfully accompanied by a group of dolphins jumping and prancing in front of our bow.

On the fifth of July early in the morning, we could recognize the silhouettes of Svalbard appearing on the horizon. The closer we came, however, the more difficult it was to navigate through alternating winds and drifting ice blocks. In a sheltered bay called Kamavika, we found some more protection tried to anchor the boat. The first try failed because the chain slipped out of the roll. The second cast was successful but did not hold us in position as the anchor wrapped up in the algae of the seabed. In a head over heels action, Salina freed us from the plants with the Jungle Knife. One last attempt we wanted to make and we finally managed to find a safe anchorage. Now we could breathe and take notice of our surroundings; A barren but fascinatingly beautiful landscape made us realize well that the tree line was now no higher than the sea level itself. Especially impressive was the mighty glacier that adorns the scenery. Its outlets flow directly into the sea where a good number of break-offs sent waves and drifting ice in our direction.

During the first two days, we were able to catch up on sleep and took turns with the anchor watch. When our batteries were charged and our clothes dried, we decided to move northwards into the nearest fjord. Already at our arrival, the first visitors welcomed us with great curiosity; the so-called Svalbard reindeers. The tame mammals are a small endemic subspecies of the reindeer that is at home in the high arctic archipelago. Since the animals rarely see people in this environment, they were approaching us with great interest. Being back on land after a long time made us all feel pretty exhausted. Nevertheless, we enjoyed it very much to stretch our legs for two days. Salina and Andri were especially happy to have a bit more space for their daily training session than the boat deck provides.

After two days, we decided to set off for Longyerbean –  one of the most northern settlements on earth (78° 13′). The capital of Svalbard was founded in 1906 by an American entrepreneur as a mining town. Until that time, the entire archipelago was an uninhabited and stateless territory, where people of different nationalities were engaged in fishing, whaling, and mining. The Treaty of Svalbard from 1920 gave Norway sovereignty over all islands but obliged the country to ensure that citizens and companies of all signatory states may engage in economic activities on equal terms. Switzerland has been part of this agreement since 1925. Coal mining today is mainly operated in Sveagruva and Barentsburg whereas Longyearbyen lives from tourism and research. There is a branch office of the Norwegian Polar Institute (NPI), the UNIS – a joint project of Norwegian Universities – as well as the Svalbard Global Seed Vault, a long-term storage facility for seeds. The researcher Andrew Hodson welcomed us on the harbor and took us out to the nearby swamp area. Andrew has been conducting research in Svalbard for 20 years and could show us on-site, how stored methane deposits in the permafrost soil are increasingly released into the atmosphere due to global warming (see video for details).

Last, we could use the provision of the internet to seek information on our onward journey to the unknown (and sparsely recorded) north. The next opportunity for a post could be some four weeks away – we look forward to keeping you up to date asap! (Simon, 14.07.2020) Until then – track us!

Check out our newest media coverage:

Check out our references.