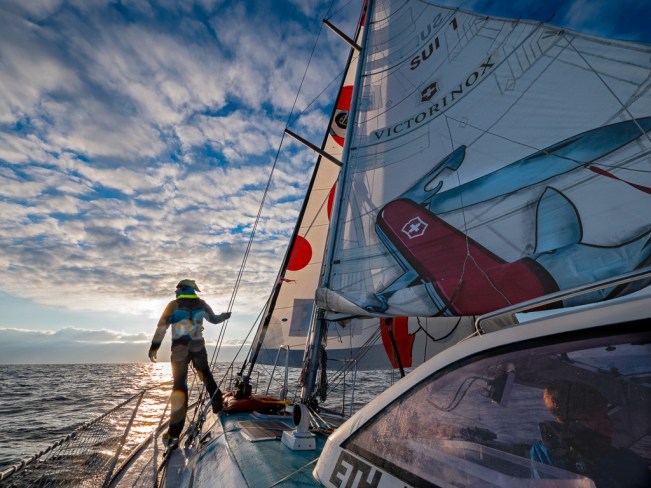 Last year it was a different story:

Unfortunately our journey started with some complications with the engine. A few hundred meters after leaving Lyngseidet there was no cooling water coming, so we had to immediately shut down the engine so it would not overheat. We then sailed with very low winds back to Lyngseidet were we stayed for one more night. During the whole night Dario and Sabine worked on finding out where the problem was. The next day, 18.6.2021, we started another attempt and made it a little bit further, but again the cooling water stopped coming and we had to anchor at the bay of Koppangen. As at first the weather did not look to bad at that time, the researchers Max and Sebastian started to go to the glacier Strupbreen to take their first samples of micro-plastics. They ended up walking 6 hours through pouring rain and therefore could not take any samples. However, it was a first sight of the mountain and they had seen where they can go up the best. On they way down, they saw that Pachamama was quite close to the rocks, and they were wondering if the boat has moved. When they arrived at the beach they saw however, that the location of the boat has changed and they found out, that the crew was awake as they had to prevent the boat from crashing into the rocks.

As the weather cleared up the next day (19.6.2021), Max and Sebastian decided to go to the mountain again to take samples. They started at about 17:00. Their first stop was directly at the beach where they showed the whole Schwoerer Family how they were going to take the air-, water-, and sediment samples. The children were all interested and always had a helping hand! While science was on the go, Dario and our photographer Peder started to make a bonfire so that everyone could eat fish, which was caught by Noe, Alegra, Mia and Vital some hours before. After that, Max and Sebastian started again towards Strupbreen. This time they were successful. Sampling in these areas however is a cold issue and it took them longer as expected. They were back at the boat at 06:00 on the 20th of June, almost 12 hours after they started. After a breakfast they went straight to bed, but they have got the good news, that the problem with the engine could be fixed and that we all could continue towards Svalbard.

The first hours were quiet, the weather was good and the sea calm for a couple of hours. The next goal was Sørvær where the famous rock “Andotten” is located with a big bird colony. The colony however was not as busy this time. There was a discussion why this might be, and if this might be because of the decrease of the fish population, the food base for the birds. Sabine and Noe started at 01:00 on June 21st, the longest day in the Northern hemisphere, to take their first eDNA and micro-plastic samples from the ocean with their eDNA-pump and the manta-net. Anyway, the weather was beautiful and we arrived in Sørvær with the midnight sun shining though the scenic fishing town on Soeroey Island.

The next morning father and son of the fisher-family Furøy helped us to get some oil and fuel. Soon after we started to sail in calm conditions with direct course towards Bear Island, following by whales just some miles off the coast.

On the 22nd we had to change the course to the West as the wind direction and its strength changed. The sea got a little bit rougher but so far nobody has been seasick. The change of course proved to be a good decision as in the night to the 23rd we could turn again towards North with better winds. At 07:20 on the 23rd we had sight to Bear Island about 25 miles to the East. We even could see snow there. Sabine told us, that last year at that time, no snow was on the island. During the day, the sea got calmer and the wind decreased a little bit, so we could keep course to Svalbard.

On 24th at about midnight, 42 nautical miles West of us, we could get the first glimpse of Svalbard´s Southern peaks. At that time water and air were still calm. This allowed us to spot several whales and seals while they were feeding. As we got closer to Svalbard, we could even see the glaciers and started to look out for ice swimming around in the ocean as there might be a danger of collision. As we follow the Svalbard West coast further North, Max and Sebastian get the feeling that sampling on the glaciers here will be an extremely cold issue.

But thanks to SPORTLER we are all optimistic that we have the right equipment: International mountain- guide Dario is very happy to finally have new climbing boots after fixing his old ones several times in the last 7 years.

The six days on sea passed fast. Thanks to easy conditions and the great kitchen of Sabine the mood was high. There was a lot of time to observe nature and even to play Yatzy. Now we go to EXPLORE the High Arctic. First, we do our traditional non-alcoholic “anchor drink” and straight after a polar-bear-protection-drill before we step on land. Keep tuned to know more. Please note that we are in one of the most remote places on the globe, but we do our best to blog again as soon as there is an opportunity.