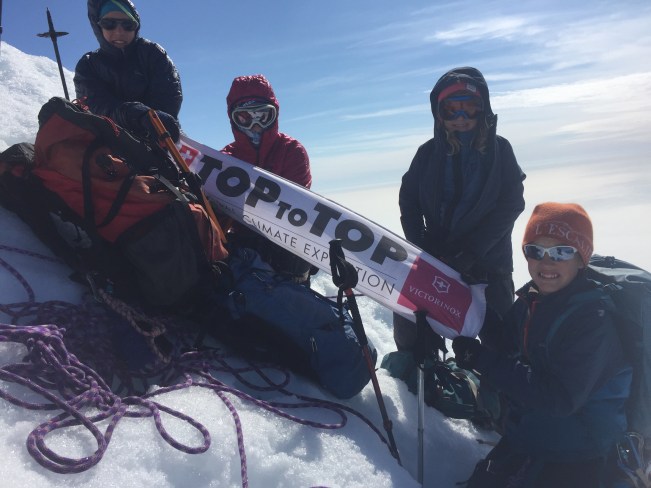 Salina 16, Andri 14, Noé 11 and Alegra 10 became the first kids climbing Beerenberg to honor its Swiss compatriot Paul-Louis Mercanton on the 100-year jubilee of the 1st ascent.

Except for the first ascenders – Swiss meteorologist Paul-Louis Mercanton, English polar explorer and geologist James Mann Wordie and naturalist Thomas Charles Lethbridge on a scientific expedition between 9th and 11th August 1921 – there have only been crew members of the meteostation on Beerenberg – 18 times altogether; but all of them only Norwegians. The first non-Norwegian summited in 2008. Here is our major mountaineering adventure 2021 – like Mercanton, also in the name of science:

After our turning point at 80 degrees North, North of Amsterdam Island, the most north westerly island of Svalbard, we sailed back South to Lyngseidet were we reprovisioned and got vaccinated. At the same time, Emily from the Tromsø University could fix our microplastic-air-sampler. In the evening we listened to the first music concert after the COVID outbreak, just next to our boat in Tromsø harbor. Next morning the kids enjoyed the swimming pool with our friends from sailboat “Silmaril”. Our friends Trude & Arne were helping with some last-minute-preparations and also to get Salina and Andri on board of Pachamama in time.

The final stop before we crossed the 500 nm to Jan Mayen was in Nyksund and Myre on Langøya Island. There we had the opportunity to see Peder from Svolvær and Michael from Alsvag again. We prepared our climbing gear for our major climb this year and did some crevasse rescue training drills at the peer. 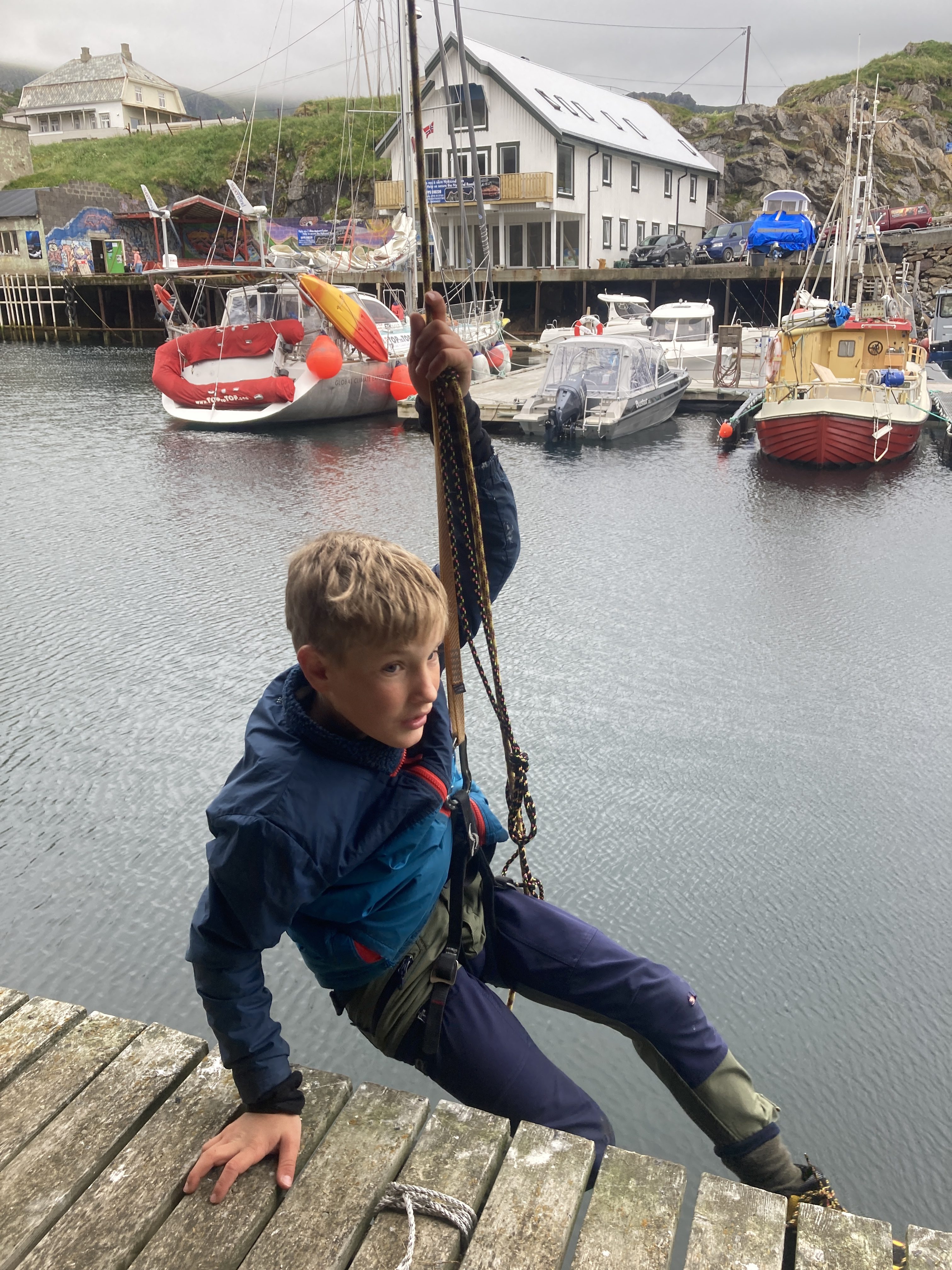 In the morning of the 13th of July we first saw the majestatic peak of Beerenberg from far. Its name is Dutch “Bear Mountain”, and comes from the polar bears seen there by Dutch whalers in the early 17th century. Beerenberg is a stratovolcano dominating the northeastern end of the Norwegian island of Jan Mayen. After several more hours we reached the coast and started samping at the most northerly cape. Along glaciers and some icebergs we anchored finally in Kwalrosbukta in the southwest of the island. From the beach in Kwalrosbukta, we started at midnight walking the 16 km to the base of Beerenberg, while Sabine did anchor-watch with Mia and Vital. First we followed the eastern shore. When we started climbing we had loose rocks. This didn’t fit to Sebastian’s knee and he decided together with Max to turn back early morning at close to 600 m.

We continued in the fog, put the crampons and roped on at the edge of the glacier. The glacier seemed endless. After some hours suddenly the fog was lifting and we saw the highest peak of Beerenberg, Haakon VII Toppen with 2,277 m (7,470 ft), the world’s northernmost volcano.

The sun was burning and still today writing this report our lips are still burned. Because the snow was getting soft, we decided to go in a straight line to the top. It needed a lot of energy and good navigation through the crevasses. It was hard work to make the trail in the snow. The slopes of the volcano are largely ice-covered, with several major glaciers including five which reach the sea. Andri took to lead and continued in a steady pace another 16 km. We had to climb steep ice in the summit upswing and had some challenges to cross the bergschrund. Thanks to the ice axes mountain guide Johann Kaufmann from Grindelwald organised for us, as well as the excellent crampons from Petzl and climbing shoes from LA SPORTIVA, we managed. Thanks to our mountain guide “Andri” we reached the highest top of Berenberg safely on the 14th of July 2021 at 16:00.

On the TOP, after 16 hours non stop climbing, Alegra 10 years old, Noé 11, Andri 14, Salina 16 and Dario knew that it will be a long way back. Suddenly the wind picked up and the temperature was dropping. So we shortly took a picture, tied down securely the crampons for the steep ice down-climb to the flatter part of the glacier. As soon as we reached the flatter part, Salina fell into a crevasse. Noé was fast and good and managed to avoid a fatal fall. – Drills save lives! – He anchored Salina, who was hanging over a black hole, and pulled her to the safe side like a pro.

After 26 hours non stop walking and climbing we were back at the anchorage; covering a total of 78 km in distance and close to 3000 altimeters. Everybody was happy about the accomplishment but tired and looking forward to the warm bed on our sailboat. But the ocean swell was to high to raft over from the beach to the anchorage. Max and Sebastian have been back earlier and welcomed us in a refuge cabin of the Norwegian army. The next morning Andri, Alegra, Noé and Dario managed to make it over the huge surf to the sailboat were Sabine offered them a great dish. The next day Andri and Dario managed to get also Max, Sebastian and Salina on board, who were outfitted with survival suits. In the common operation – with the Norwegian army on the beach and Dario and Andri in their raft – they managed to safely transport 2 researchers with equipment and 2 bicycles attached to floating fenders through the surf to a waiting boat in the bay.

It was last minute to leave the bay. The conditions worsened. We cleared the anchor and sailed to the Southern cape of Jan Mayen where we took more e-DNA and microplastic samples, before we sailed further towards Greenland.