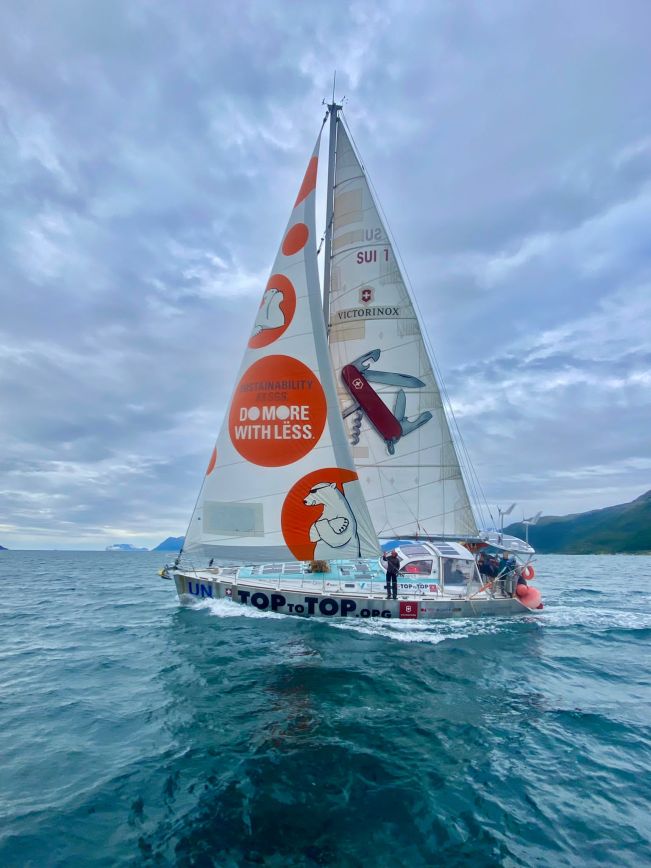 This year was a very difficult year. The weather and sea conditions were special: the permanent high pressure areas over Greenland and Europe forced the extended low pressure areas in rapid succession from the North Atlantic into the Arctic waters between northern Norway, Jan Mayen and Greenland. This special weather constellation not only led to a hot summer in Europe and subsequently to an extraordinary glacier melt in the Alps, it also influenced our route, sampling, clean ups and climbs. We tried to reach Greenland several times and in the end had no time left for Svalbard.

After our anchor winch stopped working after a violent storm, we made it to Skjervøy. In this storm the wind peaked 100 km/h and there were 7 meter high waves off the coast. At the end a huge wave entered our cockpit. It damaged a cell phone and the bracket of our electric outboard “Torqeedo”. Miraculously, the electric engine remained intact.

On August 17, we aborted the last attempt to bring our two scientists John and Siri to Jan Mayen. A Norwegian Army Hercules aircraft that was taking them at the time had to turn back due to bad weather. This shows the conditions we faced that year. Fortunately, the flight succeeded later, so at least they were able to take samples ashore on Jan Mayen.

Sea and weather conditions for the crossing were extremely poor this summer. A safe weather window for the approximately 1000 nautical miles from Norway to the East Greenland coast failed due to pronounced low pressure areas, between the massive and stationary high pressure areas over Greenland and Europe. One low pressure followed the next, and in between there was no calming that could have guaranteed a safe weather window for safe passage. The pronounced high pressure over Europe was responsible for the heat in Europe.  In East Greenland it was cold, so that the pack ice on the coast and in the fjords partly did not melt. This temperature difference was certainly also a reason for the stormy seas and after five attempts we did not succeed to make landfall in Greenland this year.

On the other hand, despite difficult conditions, we were able to collect 8 eDNA and 8 microplastic samples and celebrate the 100th sampling. This on 8/27/2022 at over 70 degrees north latitude in northern Norway. The samples were collected from remote locations where we could observe a lot of marine life, such as one of the largest maelstroms in the world or a large population of sperm whales.

A big compliment goes to the entire crew. They showed a lot of patience and held out until the end, even though we could not reach our destinations Greenland nor Svalbard. Many thanks also to the people on Grytøya Island and specially to Halvard, who made everything to comfort us. The same goes for fisherman Dag on the island of Kagen.

We hope that the necessary repairs will not cause us too much headache. We are optimistic for 2023 and are sure that such conditions will not be repeated every year.

Since then, we have been concentrating again on school visits and bringing young people closer to nature and clean up the wonderful Arctic.

Last note: This summer Alegra made second at the Tromsø Sky Race in U18 and we celebrated our 21st wedding anniversary: