The TOPtoTOP Global Climate Expedition is the 1st expedition over the 7-Seas to the 7-Summits that will be achieved by human and nature’s power only. Our mission is to inspire children for a better future. Along the expedition we share examples of nature’s beauty and innovations for a green planet, in class rooms all over the world. Our key messages is “climate protection” and “enjoy nature through sport but also give something back to nature”. The expedition is a reference to demonstrate that great goals and progress can be achieved in balance with nature. Our vision is that TOPtoTOP becomes a lasting platform which inspires children for nature and sport globally.”
Posted
March 27, 2015
Category
ACT
Tags
FEATURED
Comments
1 Response

The TOPtoTOP Global Climate Expedition connects the various climate zones of each of the seven continents on earth. Climate observations from people along the expedition help us understand the impact of global warming. Also, scientific facts are explained in an easy to understand manner.

The expedition team visits selected climate protection and sustainability related projects to communicate these climate solutions to schools and to the media in public presentations and on the Internet. Our goal is to motivate people to Act Now.
If you have a good solution, Act Now and explain your solution to everybody.

Pachamama is an Inca word that means much more than “Mother Earth”. It suggests a lifestyle in harmony with nature.
Pachamama serves as a reference for the cruising world. Bernard Nivelt designed this 50 feet aluminium sloop especially for this extraordinary expedition. The design objective and concept of Pachamama was to develop a vessel that can operate sustainably and fully autonomously (renewable energies) with maximum safety in the toughest marine environments. With Pachamama, we set new limits and give another example that great goals can be achieved in harmony with nature. Several world-leading companies around the globe are participating to outfit Pachamama with state of the art technologies and products.

Read More About the Pacahamama HERE

We made it to Badwater Basin and Death Valley Schools

SEE ALL OF OUR CYCLING POSTS HERE. 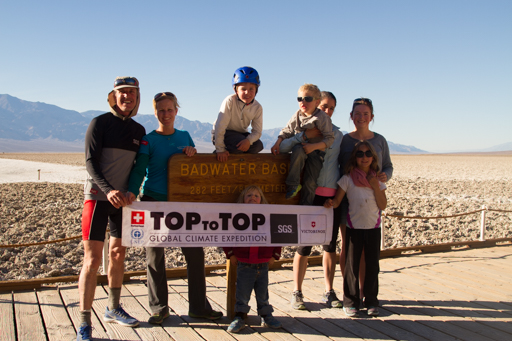 We did it!! TOPtoTOP Global Climate expedition made it from the highest point on the North American continent, Mount Denali, to the lowest – Badwater Basin, Death Valley, all under natures force and human power. 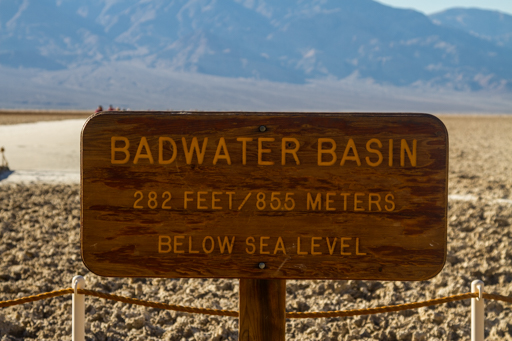 On Monday 17th Novemeber we had a early start to visit the handful of elementary school children who live and study in Furnace Creek. Although a very small class, it was great to visit and spend time with the young students, hearing how they adapt their lives to the intense summer heat they experience. Thank you for having us! 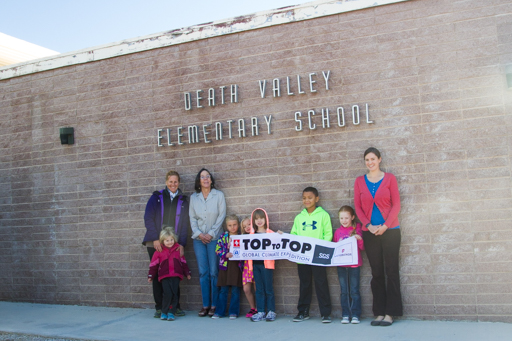 We also passed the impressive solar energy complex at furnace creek, which we were informed provides the area with around 30% of their energy needs – a really good starting place to build upon! 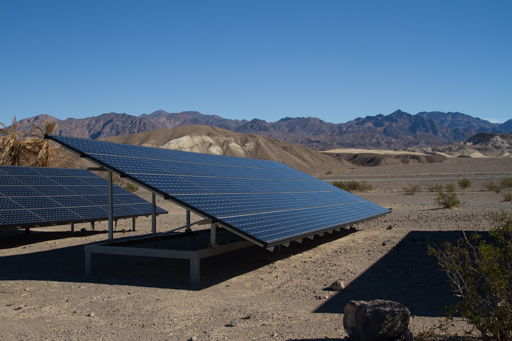 We then cycled the final 17 miles to Badwater Basin, our end goal on the cycle – a very momentous day. Celebrating the ‘finish line’ with Lindt chocolate and BBQ crisps – a real treat!!
The cycle alone has brought us over 1,300km on bike, climbing a total 35,400 feet (thats 1.2 x the height of everest!!!) taking us through all climate zones. Along the way we have met so many kind and generous people – thank you all again for your support in getting us here!

With the elevation level so low, the ground was hard and very salty, producing a white blank canvas. Dario pointed out that although very different climates, the peak of Denali and the pit of Badwater did have quite a few similarities; both were white, barren and subject to the extreme of the continents climate. 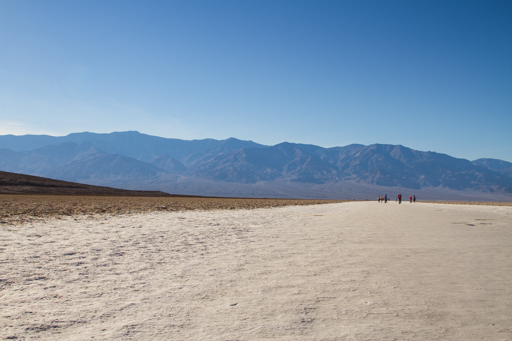 We then cycled on to a spot a the edge of the valley – leaving the two passes we needed to climb to get out of the valley until the next day. We were greeted with the most impressive sunrise over our little camp, which was a good wake up call before climbing the Jubilee and then Salsbury pass out of death valley, before heading down into Shoshone, where we had two talks at the Death Valley high school in the afternoon. 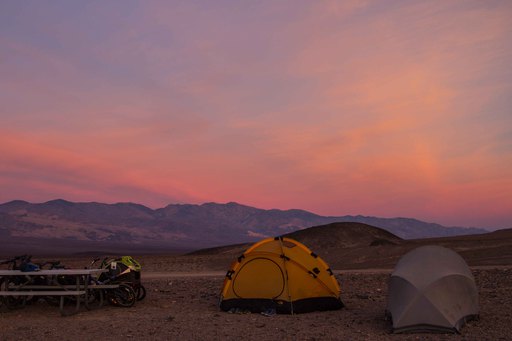 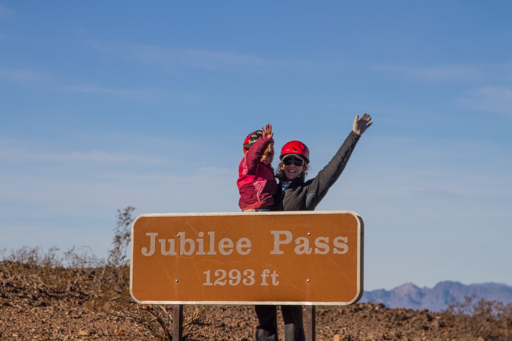 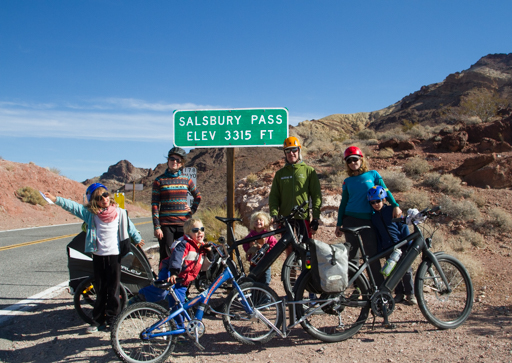 We are now camped in Tecopa and will be heading eastward into Nevada and on to Las Vegas, visiting schools there before the long Thanksgiving weekend. The next month or so, will then be spent cycling from school to school in Nevada and Southern California. If you know anyone in the Las Vegas or surrounding areas, or if you yourself are based there – please do get in touch! It’s always great to meet people along the way!
To download our latest press here – en_2014-11-19_press-release-toptotop-small.pdf
More photos to be found on dropbox when higher internet speeds allow too.

Headwind and Glaciers (Cordova to Juneau)

The wind turned against us. With so much headwind from the E we decided to hide as the forecast looked bad for the next couple of days! We went into Constantine Harbor on the W side of Hinchinbrook Island. On the navigation chart there was an abandoned village (Nuuciq) nearby, so we decided to go for an explore… 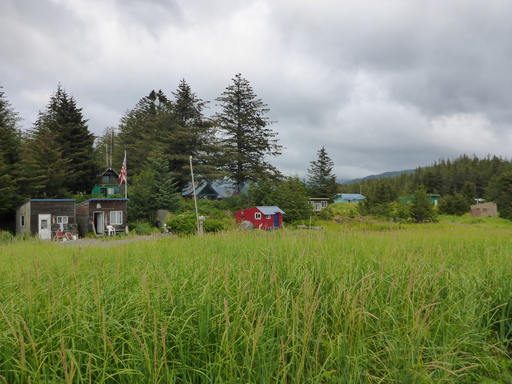 We were greeted by a group of children and teenagers kayaking in the bay. Soon after John, the camp leader, joined us and started to explain: This used to be a native village of around a thousand and many of the helpers had relatives that once had lived here. It was one of the largest native villages in the PWS. 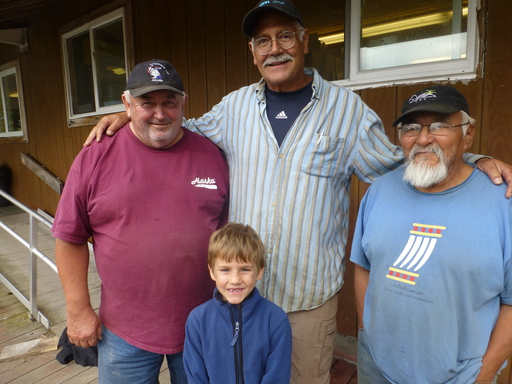 Nowadays nobody lives there apart from the caretaker. Yet for 20 years every summer the village is revived for a few weeks, as the base for a camp where individuals from all different native villages in Alaska to come together and learn about their ancestor’s culture and lifestyle. They learn about subsistence, to paddle the traditional boats: the unyak and baidarkas, how to make wooden hunting paddles and traditional mittens, learn songs and dances and much more. 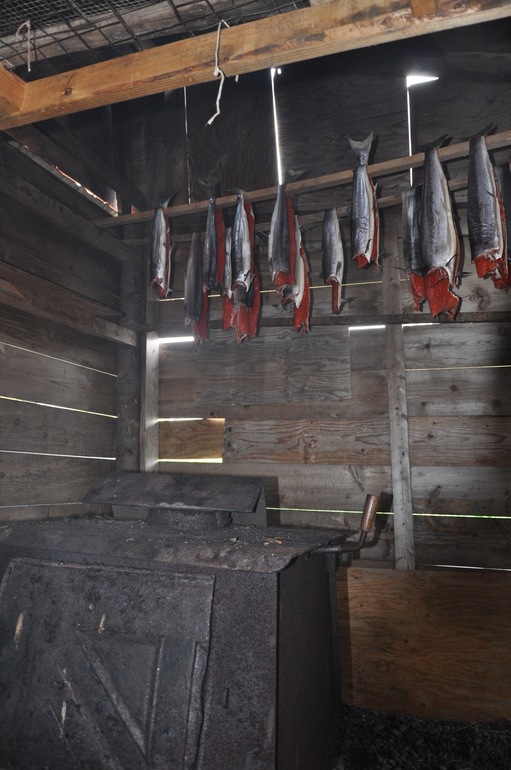 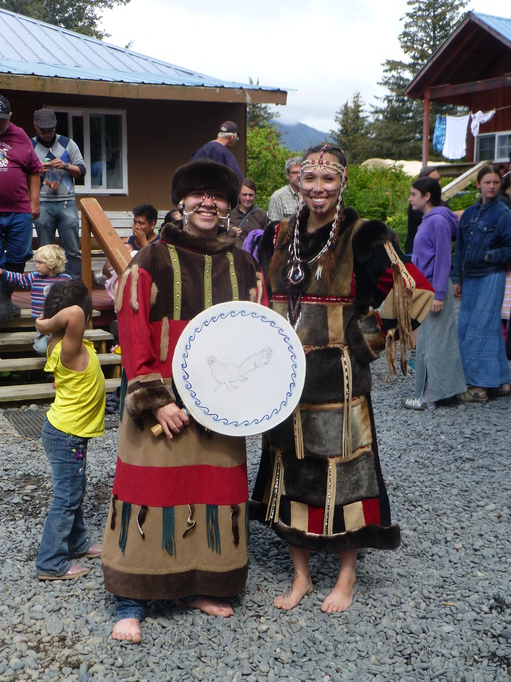 We were lucky enough to come here during this time and get a small taste of these traditions. It is needless to say we learnt a lot. From the salmon smoking hut, to watching halibut and seal being gutted. We even got to try seal which is weird mix of fish and meat. With the texture of meat and the taste of fish we couldn’t quite get our head around the taste. The meat is very dark as it is rich in iron and is said to be very healthy. 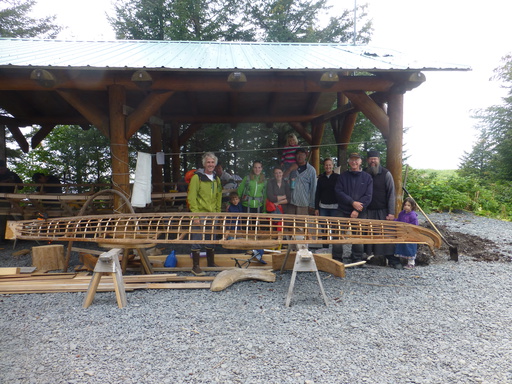 The paddles for the baidarkas, the traditional kayaks, are pointed at the end to make sure they are nearly silent in order for hunters to easily sneak up on prey. We all had the chance to make one: the children made model ones and the adults actually got to make to real sized ones for our dinghy. 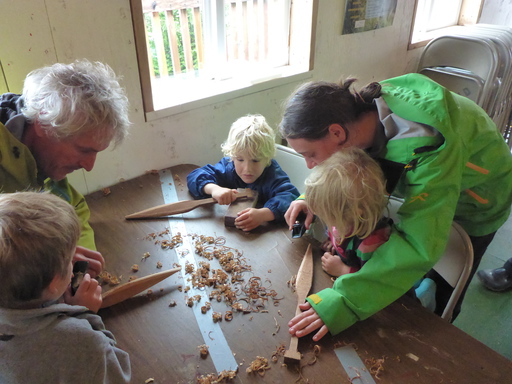 We had a great time making them and they turned out beautiful. So now Salina and Andri have a set of paddles to help row ashore. The wood used is usually red or yellow cedar and smells great. Dario thoroughly enjoyed helping build part of an unyak, a large flat-bottomed canoe.

One evening Dario did a presentation for the whole camp and exchange the camp participants showed us some winter games. The hunters would play these to stay fit, warm and keep spirits high. Then we tried to sail to Icy Bay but after 24 rocky hours of headwind again, we had barely moved. So we turned back towards Hinchinbrook and, with the wind with us for once, were back in half the time. After a good night’s sleep in Garden Cove we left again for Icy Bay. On the way, just after watch handover Sabine called that there were porpoises. The two Dall’s porpoises stayed with us for an hour playing in the bow wave. What a start to the day! 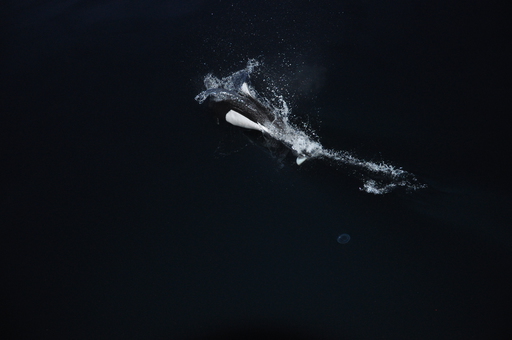 In Icy Bay we were warmly welcomed by the hosts of the Icy Bay Lodge, TJ and Wayne, and were spoiled with amazing food and a shower. On the way into the bay we had seen a beach covered in washed up trees. This looked like a spot where we’d find a lot of tsunami debris. So the next morning we set of to have a look. On the way a large brown bear looking for food slowed down our party considerably. Surprisingly we did not find a lot of debris on the beach itself. 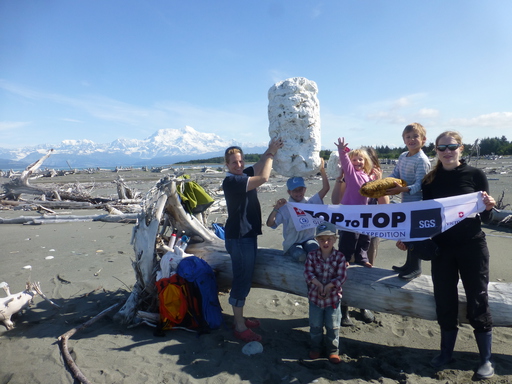 Before sailing on to Yakutat we went further into the fjord to have a look at the glaciers and get closer to Mount St. Elias. It was stunning: slowly floating along under a cloudless sky with icebergs, glaciers and mountains surrounding us. A few harbour seals even slid off their iceberg to come have a closer look at the boat. 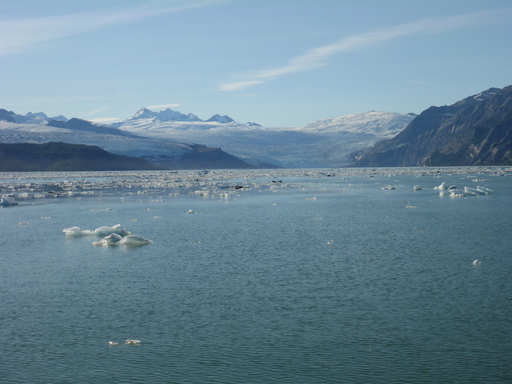 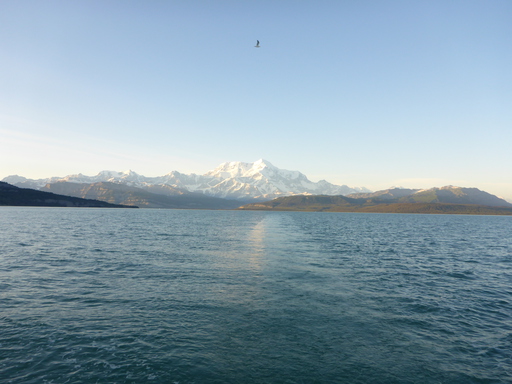 We arrived in Yakutat, where we met with Quentin Hurt, whom TOPtoTOP had met at the Durban, South Africa, at the COP17 Climate Change Conference in 2012. The weather was improving but we still had mostly easterly headwinds. 1st August is the Swiss National Day, the founding day of the country. It’s customary to build a bonfire. So before we could leave, we travelled out to a camp site on the Situk River, built a fire, roasted some sausages and waited for the tide to turn. Quentin: Then we went on to Lituya Bay. The entrance is dangerous and so you have to wait for the tides to turn before you can attempt to enter. In 1958, ice and rock dislodged from the nearby mountains, causing spray over 600ft and a tidal wave that rose 100ft high, destroying two boats and carrying a third miraculously out of the mouth, unharmed. Today there is still evidence of the natural disaster, but for us it was simply a quiet bay where icy rivers run over the lichen-covered rocks into the murky turquoise glacier water. We were fortunate to clearly see the two arms of the La Perouse glaciers descending to within a hundred meters of the coast. The high rainfall in the area keeps it active but the warm air had caused it to recede already this year. 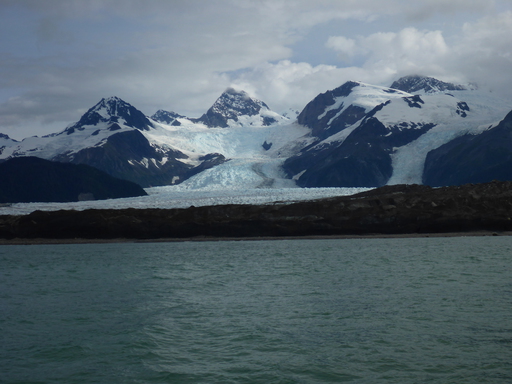 Elfin Cove was, as the name suggests, a stilted village tucked into a wooded bay. We couldn’t stay for long but while we toured the houses and viewed the old school room, now museum, three float planes arrived and left, carrying fishermen in and out. There are no roads and hence no road vehicles. Instead all the houses around the bay are connected by boardwalk. Dario made contact with old Schwörer friends, Bill and Marjory, who they’d met in Mauritius and travelled with through South Africa on to St Helena. Marjory kindly drove us all through to the Tongass National Forest, where hiked up to the Mendenhall Glacier face. Andri and Dario practiced climbing on the crevasses while the rest of us climbed (as best we could in our hiking shoes). We visited the spectacular ice cave (a portion of which collapsed just a week ago). 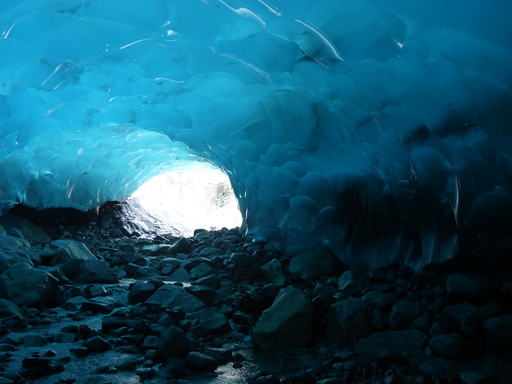 On return in the evening, we met Bill, Marjory and friends for a barbecue at the Skaters Cabin, near the trail head. The view of the Mendenhall Lake and Glacier face were spectacular but Marjory explained to us that when she arrived in Juneau, the glacier face was beyond the waterfall and that the face is receding at about 160ft per year (about 6 inches per day)! 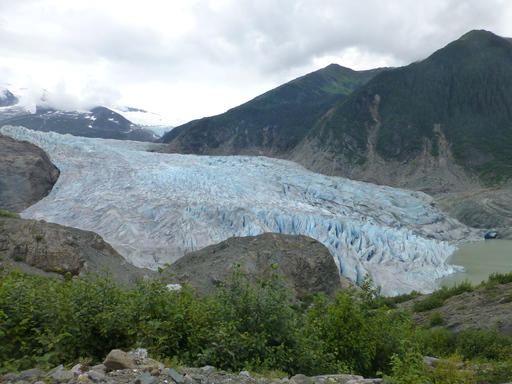 Currently, we are moored outside Bill and Marjory’s house. Dario needed to complete some customs formalities and we broke the voyage for the Schwörers to regroup, celebrate Noe’s birthday and plan the final stages before the winter of 2014. More pictures here!