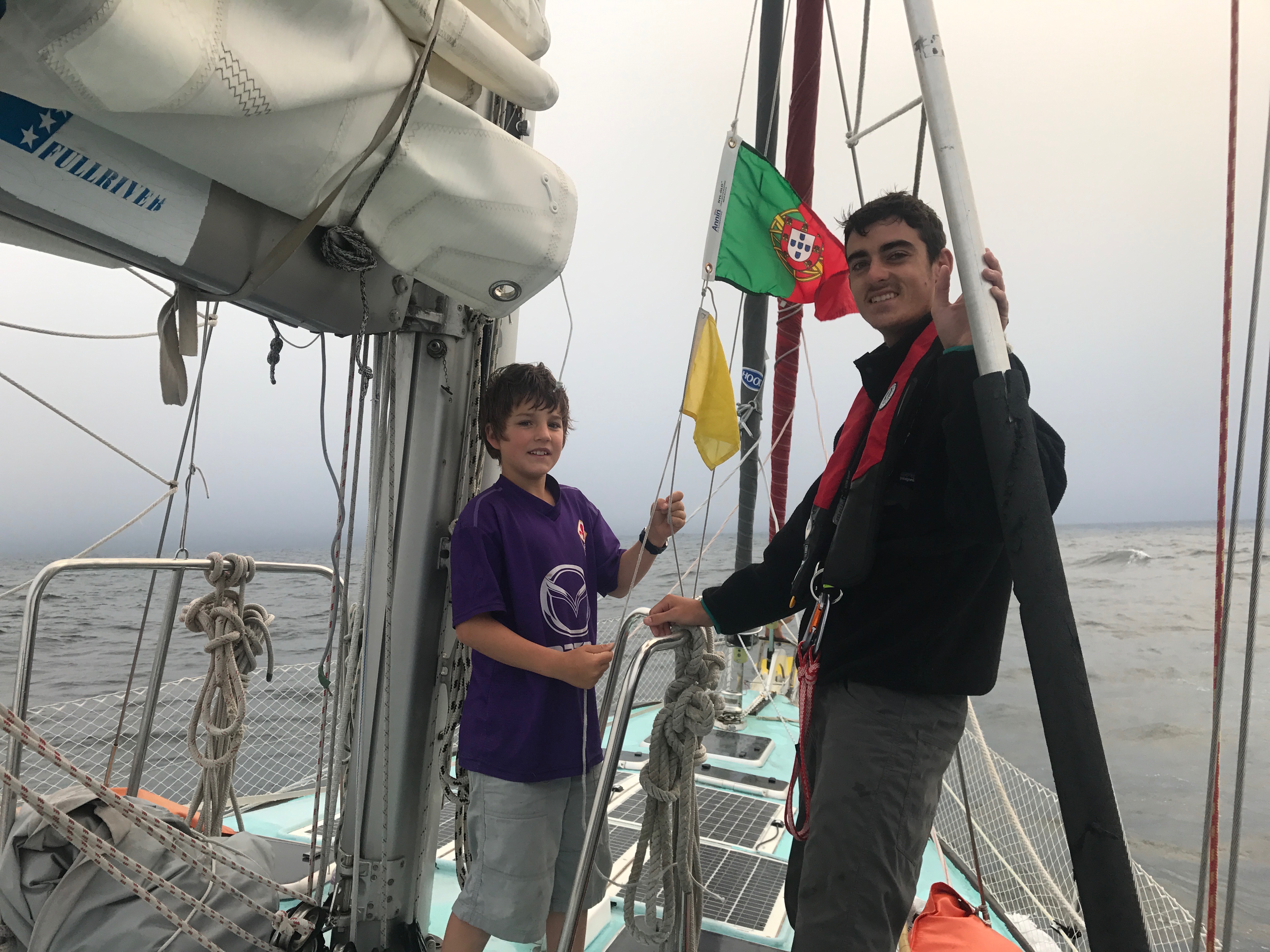 At sunrise today the 21st of Many we made landfall at Flores in the Azores, just in time before some strong Southerly winds kick in.

Last week was eventful. We celebrated our 17th wedding day on the 10th and Alegra’s 6th birthday on the 18th. Andri became our best climber on board in climbing the mast twice in heavy swells. This was necessary when a rope collapsed on the top of the 20m mast in 60 knots of wind and was several times around the Genua furling system.

Again we identified some whales and many dolphins. We were exited to here from Rob about the progress to get a hydrophone that would allow us to collect even more valuable data. The biggest peace of plastic we encountered was about 2 m2.

All in all it was a fast trip with some uncomfortable seas. Thanks to our volunteer Elliott, it became a fun trip for our kids. He just finished Highschool and joined the boat in New York. The kids love him! He became the big brother to them and a valuable crew member on the journey.

Many thanks also to our Bermuda friends Swiss Honorary Consul Fabian and Petra Schönenberg, Isabella and Tamara Betschart, Kerry and Sasha Howland for all the delicious food. The former Swiss Honorary Consul Leo Betschart baked us cookies and fresh bred and even a Swiss Zopf for the trip.
Some joined us on Pachamama on our sail from Hamilton to St. George’s, where we cleared out of the country and shared with us the exiting moment with the Americas Cub boat.

A reminder that “Murphy’s Law” is still in place was a message we got yesterday from our friend Martin, Commanding Officer of the School-ship SVANEN from the Danish Navy. Thanks to his great skills and wisdom a disaster could be prevented. They left Bermuda 60 hours ahead of us with new cadets. After his message below, we decided to intensify our MOB drills with the kids. Starting today with a unexpected MOB drill at 3 am on the approach to Flores.

So cool to hear from you! I hope that the Danish Arctic Command will be positive towards your requests.

We are currently (Friday afternoon) a bit ahead of you at 37 33N – 32 43 W, and our ETA at Horta is Saturday afternoon/early evening. Have you decided on a port of call at the Azores?

Everything is quite well, despite a rather unfortunate crossing from Bermuda. Here on board SVANEN we have had one of those accidents that just must not happen: A man overboard. Even though all our safety measures were taken and the weather was not that bad, one of our trainees slipped overboard in the middle of the night last week. Luckily, she was wearing a lifevest, and we got her picked up again in a matter of a few minutes. Since she had pains from her back and neck, we were worried that something was fractured, so in agreement with the Danish Radio Medical and our JRCC back home, we had her evacuated to a passing commercial vessel which to all luck was nearby. She was dropped off at Bermuda, and as it turned out everything was all right with her, she is now safely home in Denmark where she is being taken good care of. Of course, it was a dreadful experience for all of us, but we have worked it through and everyone on board is fine. It is the first time ever we have had an accident like that, but the fortunate outcome has shown us that our procedures works and that hundreds of times of training a MOB situation actually does pay off. The sea can sure be dangerous, none of us should ever forget that.

Adding to this, our engine here on SVANEN broke down yesterday, and as it is a highly computerized, modern engine, we have not been able to fix it out here. Good thing we are in company with THYRA so they can tow us to our berth in Horta when we arrive!

I hope that you have had a more pleasant crossing than us, and hope to see you again, if not in the Azores, then perhaps at Greenland next year – who knows? 🙂

Now in the Azores we start visiting schools and organizing clean-ups. Also important is that we can recover and refill our batteries for the long trip to Arctic waters. Specially Sabine in the 7th month of her pregnancy.
We hope that the encounter with the grey whale did not cause some major damage. We dive ASAP to find out! To brush off the ink of the giant octopus on deck will be an easy task.
We also hope to find the parts to fix our main sail. But most important, after Martin’s report, would be a donation to get a new MOB marker with a light integrated. The one we have, got submerged by the heavy seas and stopped working.